It looks like AMD has shipped over half a billion GPUs in a total of 7 years time, as per one recent research report posted by Jon Peddie. This is an impressive feat thanks to the company’s huge success with consoles, RYZEN desktop CPUs, APUs and also the Radeon “discrete” graphics cards lineup. JPR has split the info in different categories.

AMD’s discrete GPUs accounted for the maximum sales at 36 percent (GPU shipments). APUs on the other hand accounted for a total of 35 percent, and the consoles 29 percent of the total shipments. It looks like notebook APU shipments were more than desktop APUs, almost double.

AMD reached the 553-million GPU mark in 2019. According to another report, the overall GPU shipments of the past seven years accounted for 22% for AMD, Nvidia was at 16%, and Intel at 62%. Intel’s huge success is because of the iGPU onboard graphics which comes with most of the Core series of processors.

The new PS5 and Xbox series X contracts for AMD might bring even more bigger gains for the company in near future.

” As their APU sales increased (partially due to the console wins) their overall sales increased even more. Likewise, as AMD introduced the Zen CPU, associated GPU sales also increased. The net result is since 2013 AMD has shipped over a half-billion GPUs either integrated or discrete.

When compared to Intel (integrated only) or Nvidia (discrete only) both companies beat AMD in their respective classes, but overall AMD beats them both. Fun with numbers ” -JPR.

Next year AMD will be able to add Samsung smartphones to its list of platforms, and those numbers are surely going to be huge. 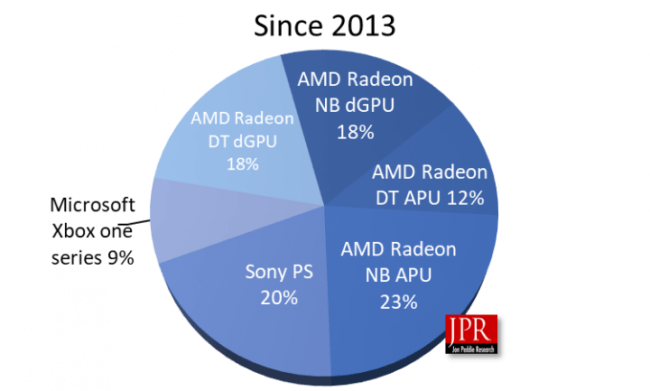 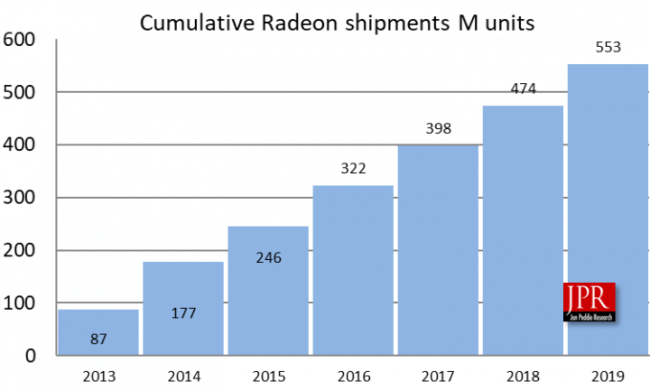