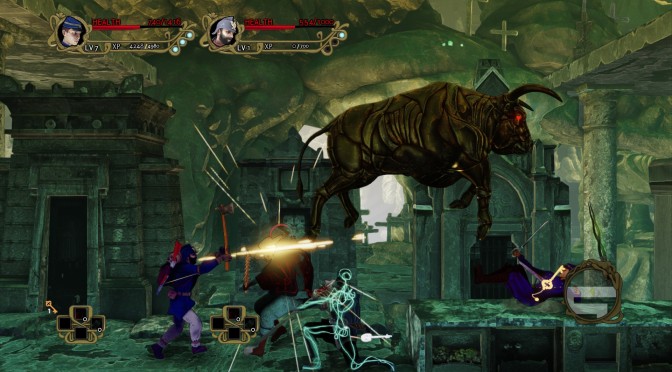 Atlus announced that Abyss Odyssey – a new 2D action adventure game from indie developer ACE Team (Rock of Ages, Zeno Clash) – is now available on Steam and comes with a 33% discount (for the next 5 hours).

Abyss Odyssey is described as a side-scrolling action adventure game featuring a complex fighting engine in procedurally generated levels that destines its three warriors to battle for an eternity.

Abyss Odyssey has an aesthetic that blends Art Nouveau and Chilean folklore in a procedurally generated environment. As players descend the Abyss, different regions will be home to different monsters, all of which have their own movesets. Capturing the soul of defeated enemies lets players take their form and battle as them. Death is no obstacle as well, as experience carries over between playthroughs. Levelling up allows more powerful monsters to be captured, more loot to be acquired, and more treasure to find. At the bottom of the abyss lies the warlock behind the enemies, and will be the boss that you face. But here’s the twist: defeating the boss only brings closer the changing of his form. As the community continues to beat the warlock, his mask will start to chip away. Once the community reaches a milestone, the mask will be destroyed completely, and the warlock will get bestowed with a brand new set of skills/challenges to overcome.