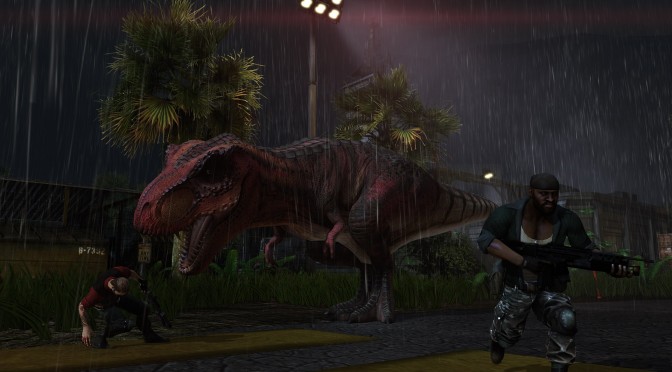 Since Primal Carnage: Extinction is powered by Unreal Engine 3, we thought it would be appropriate to comment on the game’s performance. Unfortunately the game – at least for now  – is mainly single-threaded and a result of that, we did notice some noticeable framerate drops. Circle 5 Studios and Pub Games will have to properly add multi-core CPU support, otherwise we can’t see how PC gamers will be able to enjoy a constant 60fps experience on some of the game’s ‘demanding’ maps.

As with the first Primal Carnage game, Extinction has a lot of potential. There are some balance issues that the team needs to address, and thankfully the first balancing patch will be coming next week. While its predecessor did not meet commercial success, Extinction could very well turn into a really interesting game because when everything ‘works’, Extinction feels awesome.

For example; we strongly believe that dinosaurs should have more attacks. In its current state, Extinction offers a single attack and a special attack for each dinosaur. This is something that needs to be addressed, otherwise the game will get old real fast. Or at least that’s what we believe.

There are also some additional issues that need to be addressed. The game’s LOD is relatively low even when all settings are set to their maximum values, animations need a bit more polish, and the netcode could benefit from further tweaking.

On the other hand, Primal Carnage: Extinction shows signs of awesomeness. There is a Server browser (alongside filters for you to use), there are a lot of graphics options to tweak, there is a FOV slider, the game supports bendable vegetation (thus giving us a sense of Crysis meets Jurassic Park), some stages are inspired by Jurassic Park, the action itself feels satisfying, there is no mouse acceleration side effects, and killing a damn T-Rex with a machine gun feels f’ing awesome.

In short, Primal Carnage: Extinction has potential. Circle 5 Studios and Pub Games will have to add more attack moves for dinosaurs, more game modes, and more diverse maps. The ball is in their court so here is hoping that Extinction won’t meet the fate of its original version.

Enjoy (for some unknown reason, YouTube has introduced A LOT of compression artifacts on our video. The actual game looks better and crisper)!