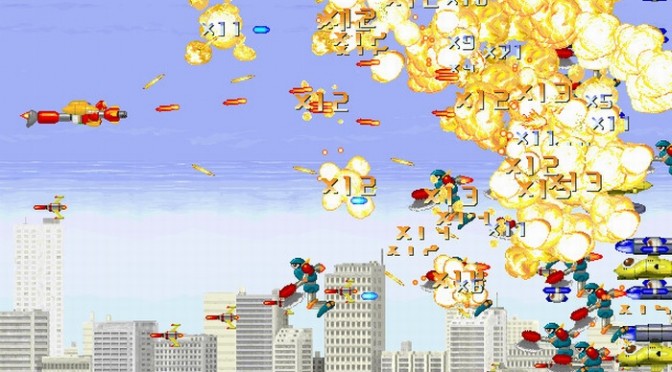 Supercharged Robot VULKAISER is a 70s giant robot anime-inspired side-scrolling shooter from the creators of SATAZIUS and GIGANTIC ARMY. The game releases on June 4th on Steam and Nyu Media has provided us with a review code for it.

First of all, let me tell you that I love classic robot animes. One of my favourite animes of all time is Getter Robo, and I am a huge fan of Grendizer, Gaiking and Voltus V (strangely enough, I was never into Mazinger Z, but that’s way off topic).

Anyway, back on topic. Supercharged Robot VULKAISER takes on the attacking Gogoh Army, backed by the VulFighter team and the head of the Super Electric Research Center, Professor Amamori. Players control VULKAISER that can combine with the 4 other VulFighter crafts for even more formidable firepower.

Supercharged Robot VULKAISER is a lot of fun. While the game feels like a typical shmup, the ability to combine with other crafts and upgrade your weapons is a great idea. The fact that you’re also controlling a robot instead of a  – at least for shmups’ standards – typical craft is also a big plus.

The game’s visuals and soundtrack is as 70s as it can get, and thankfully its control mechanics are tight. The game will be also priced at only 5 bucks, making this a tempting purchase for most – if not all – robot animes and old classic shoot em ups fans.

My only gripe with Supercharged Robot VULKAISER is the inability to select any resolution, and its ridiculously laughable amount of options. The fact that it only packs 6 stages may also put off a number of players. In my opinion, it would be awesome if the game featured 10 stages instead of 6.

For what is worth, I enjoyed Supercharged Robot VULKAISER and I highly recommended it. It may not be the “R-Type” of 2015, but it certainly is a worthy addition to the genre, especially when such titles nowadays are so rare.