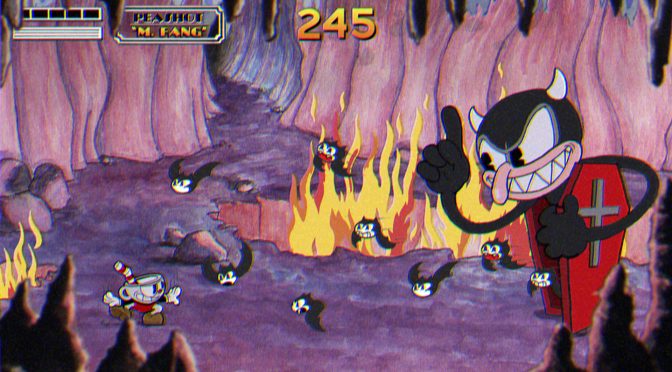 StudioMDHR Entertainment has just released its run and gun action game that is heavily focused on boss battles, Cuphead. And this is one of the best indie releases of 2017. Seriously, I strongly suggest getting it, even though some will find it difficult. This is a great game and since it’s also available on GOG as a DRM-free game, it deserves to sell a lot of units.

In Cuphead you play as Cuphead or Mugman (in single player or local co-op) as you traverse strange worlds, acquire new weapons, learn powerful super moves, and discover hidden secrets while you try to pay your debt back to the devil.

Cuphead got my attention the moment its first trailer was released. The game featured visuals that were straight out of an 30s cartoon and I have to say that the final version lives up to its initial trailer. Cuphead looks gorgeous, runs incredibly well, and is a beauty to behold (not because of its tech, but because its art style is astounding).

Cuphead is basically a 2D game that focuses on boss battles, though there are some platform sections/stages. Players start in an island and will have to defeat all bosses in order to progress to the next island. Players are also able to upgrade their powers and acquire new skills via some shops that can be found in each island.

Seriously, there is nothing more to add other than to buy this game. It’s THAT good. Even if you are not fans of platform games, this is a game you’ll have to experience. Below you can find our first impressions of it so you can get an idea of what you can expect from it.

Do note that this is video shows my first try so I was not accustomed to the game’s controls. Moreover, I didn’t know that you could parry the ghosts. Given the fact that it was also my first encounter with the bosses, there are also some mistakes due to the game’s ‘trial and error’ nature.