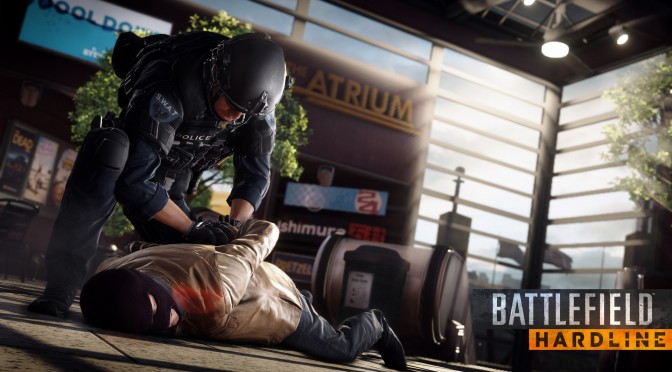 The beta for Battlefield: Hardline has been playable for a few days now so I figured it was time to give you guys my impression of the Beta thus far.

Although it feels like it belongs more as a DLC for Battlefield 4 as opposed to a standalone release Battlefield: Hardline is still a lot of fun to play. Now the textures of the game are disappointing, but it is in Beta so its almost assured that higher resolution textures will be in the full release. Although the reflections that I saw in the game were quite impressive, like the one you see below.

It even reflected the movement of other players as they crossed, which threw me off quite often.

There are 2 playable maps in the Battlefield: Hardline Beta, a Bank map where the Heist game mode is played, and a map accurately named “Dust Bowl” which is shared by both the Hotwire and Conquest. These maps work well for the gametypes they are paired with….. except Hotwire. Hotwire has serious potential to be one of the best gametypes in Hardline, if it wasn’t so darn boring.

Hotwire has two teams pitted against each other. Much like conquest, each team’s goal is to hold 5 points, only these points are cars and they must be moving in order for each team to gain points. The reason why it falls short is because of the map it is played on. Dust Bowl is just too small for players to fully enjoy this gametype.

All in all much like Battlefield 4, Battlefield: Hardline is unimpressive although not un-enjoyable. I am still excited to see this game at its full release regardless and I will be writing that review when the time comes.

Did you play the Hardline Beta? What were your thoughts? Let us know in the comments below.