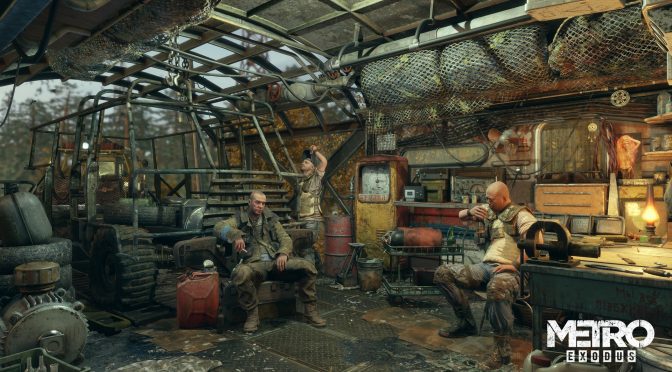 4A Games has issued a day-1 patch for Metro Exodus which was supposed to improve DLSS. As we’ve already reported, DLSS is really awful in Metro Exodus and after testing the game’s latest version, we can say that things have not really improved.

The game is still looking awfully blurry with DLSS and we strongly suggest avoiding it. Yes, it can increase performance but, at least in our opinion and based on what we’re seeing right now, it’s not worth enabling in Metro Exodus. Basically, and in its current state in this game, it’s like upscaling from a lower resolution so I can’t think of a single reason why gamers should be using DLSS (that comes with additional graphical glitches/issues) instead of simply dropping their resolution.

Those NVIDIA owners that cannot maintain a smooth framerate at an X resolution can easily lower the resolution instead of using DLSS. NVIDIA claimed that things will get better overtime but until this actually happens, there is no reason at all to be using DLSS in this particular title.

To be honest, we are a bit disappointed with DLSS in Metro Exodus. While the real-time ray tracing effects are amazing (and an NVIDIA GeForce RTX2080Ti can run the game with them enabled at 2560×1440 with some rare drops below 45fps), the DLSS implementation is mediocre. Ironically, NVIDIA was happy to advertise DLSS as a better anti-aliasing solution for 3DMark Port Royal (as it provided a crisper image than TAA) but it is only telling gamers that the neural network will get better over time for Metro Exodus. This is the definition of cherry picking. And to be honest, and as a customer, I don’t really care if the neural network needs more time so that it can provide a crisper image. When NVIDIA announced DLSS, it didn’t say anything along the lines of “When we add DLSS in a game, it will look like a blurry mess and will be worse than TAA. Over time, things will get better as we continue training our neural network“. In fact, NVIDIA claimed that DLSS would be a better/faster AA solution and that it would provide an image at least as good as TAA (as soon as it’s added in a game). That is not happening in Metro Exodus, plain and simple. “It just DOESN’T work.”