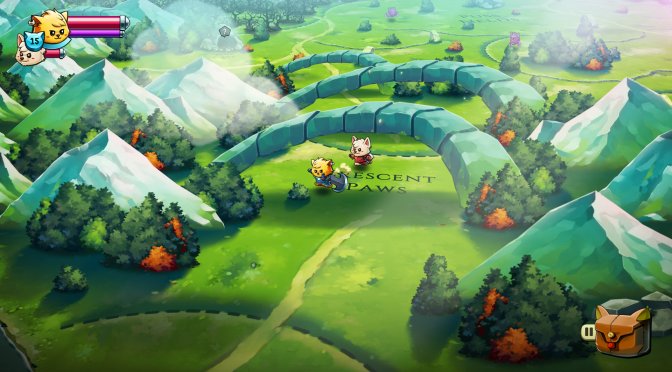 Cat Quest 2 is a new action RPG that came out last week. PQube has provided us with a review code so you can read below our first impressions of it. In addition, you can find a 10-minute playthrough video.

Cat Quest 2 is a 2D open-world action-RPG set in a fantasy realm of cats and dogs. The game supports both solo and co-op mode, and players can assume the role of a dog and a cat. The game tells the tail of two kings, brought together against their will, on a journey of discovery to reclaim their thrones.

Cat Quest 2 plays and looks wonderfully. The game packs some truly lovely visuals and an amazing art style. It obviously does not push the envelopes of graphics, and can run smoothly on a huge number of PC systems. Still, it’s the art style – at least in my opinion – that makes this game stand out.

Surprisingly enough, Cat Quest 2 is also a polished title. For instance, we did not experience any crashes or stability issues. The mouse and keyboard controls are also exceptional and you can easily control your pets. The control mechanics themselves are also great. Players can evade attacks with ease, and we did not encounter any issue at all while playing the game. We were seriously surprised by how cute and good this game actually is.

Contrary to most other action RPGs, Cat Quest 2 never feels like a grinding fest. This is a pleasant surprise as most RPGs these days require a lot of grinding so you can level up your character and complete the main quests. The game does not also feature any micro-transactions or loot boxes, something that may explain why it doesn’t force the player to grind at ridiculous levels.

All in all, Cat Quest 2 is a pleasant surprise. The game appears to be a bit short but since it’s available at only 14,99€, we suggest purchasing it if you are fans of the action RPG genre. It’s also worth noting that the game currently has “Very Positive” reviews on Steam.