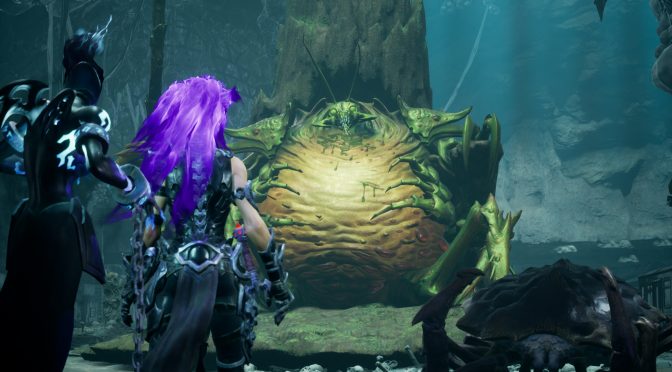 Every new little slice of Darksiders gameplay makes me utterly dizzy with excitement. I was a huge fan of the first two, and it is clear that THQ Nordic have really tried to emulate the best aspects of the two prequels in their third installment of the apocalyptic horsemen.

What is great about the most recent trailer from IGN is that it really demonstrates how far the alpha gameplay has progressed in the year since we first saw Fury’s initial whip-slinging gameplay footage. I remember reading some grumblings from fans that her whip looks a bit flimsy and cartoonish against the game’s enemies on numerous comment sections and online forums.

Now when comparing the progress the developers have made, I think the game is looking extremely attractive, at least as far as this particular boss fight is concerned anyway. A delightful weightiness has been added to her whip attacks that makes Fury look like a  more deadly femme fatale.

The alpha gameplay battle with the deadly sin, Sloth, starts in the original video at around 7:35. Let usknow in the comments what you think of the progress!

Hopefully we can try it ourselves on November 27th!