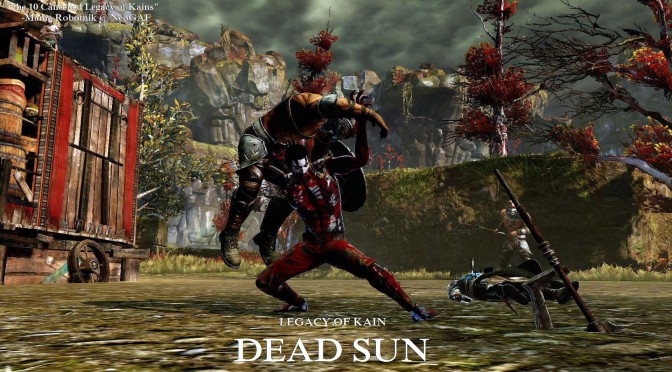 NeoGAF’s member ‘Mama Robotnik‘ has shared a video showing 30 minutes of gameplay footage from the cancelled successor to Soul Reaver, Legacy of Kain: Dead Sun. As Mama Robotnik noted, the game was cancelled by Square Enix in 2012 after three years of development at Climax Studios, with Crystal Dynamics acting in an advisory role.

Moreover, Mama Robotnik shared some new details about this project that can be read below.

“The game was not projected to meet Square Enix sales projections, and was scrapped, to the enormous disappointment of staff who had dedicated a lot of work to the project.

The story of Legacy of Kain: Dead Sun seems to be along the lines of the following (with some information from insider sources and some from my knowledge of the franchise): Kain and Raziel’s time-travel throughout Legacy of Kain: Defiance appears to have stabilised Nosgoth’s far future. Humans spread across the land once more, and plant life began to re-appear. The vampire monsters returned to more elegant vampiric forms, though some maintained their bestial ancestors’ hunger for souls. The vampires continued to block out the sunlight using huge ever-burning smoke stacks. The conflict between predators and prey continued as it always had done. Humans were able to regain enough control of the wilderness to re-establish trading towns, and became enamoured with worship of the obscured Sun.

The respite faded, and mass sterility plagued the human race. Asher, a human, was able to achieve a miracle and father an unborn child. From unseen machinations, a Saradin Soul-Eater vampire is sent to kill Asher and his family (with orders form on high to make the assassination purposely look like a massacre) but something goes wrong: As the vampire attempts to consume the human’s soul, a freak occurrence results in Asher taking complete control of Gein’s body – leaving Gein’s vampire spirit impotent as ghost that only Asher can see and hear.

Their journey together across Nosgoth’s future would have initially explored who sent Gein to kill Asher, and why. It would later link to the wider Legacy of Kain mythos. There would be substantial connections to The Elder God, the Spectral Realm and a mysterious vampire child. The large theme running throughout the story would be the religious beliefs of Nosgoth. Climax were instructed by Square Enix to introduce a new protagonist to the series (as Crystal Dynamics had done thirteen years ago with Raziel in Soul Reaver), but the events were to be a continuation of the established Legacy of Kain storyline.

The area shown in the video is The Wetlands. It acted as a gigantic hub, connecting the different areas in this region of Nosgoth together. Such areas would have included: “dungeons”, huge boss encounters, intense use of shifting between the Spectral and Material realms, masses of exploration, combat and hidden/earned upgradable abilities. The game was described as being intensely story focused, and inspired greatly by Soul Reaver and Zelda (to quote a source: “think if HBO did Zelda”). The game was originally intended to be a XBox 360/PS3 retail release (note the use of XBox button icons in the video) but as development progressed, the game was strongly considered to be PlayStation 4 launch title.

The unnamed source that provided the video explained that the game was in a pre-alpha state when it was cancelled. Any abrupt framerate drops and jumps would have likely been tidied up before release, as the game still had a lot of development to go. Also, I have had to connect multiple videos together and upload them, this is not something I have done before, so any jarring jumps or drops in quality may be due to my inexperience at this video joining process.”