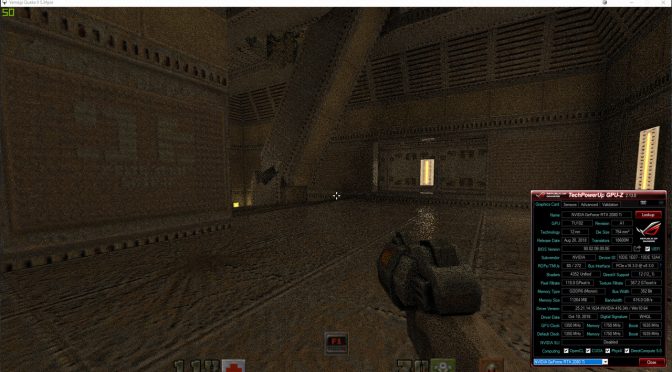 YouTube’s ‘Thavex’ has shared a video, showing Quake 2 Path Tracing running on the latest high-end GPU, the NVIDIA GeForce RTX 2080Ti. In case you weren’t aware of, this real-time path tracing is possible thanks to Amietia; a from-scratch GPU-based pathtracer created specifically for Quake 2.

Amietia – which you can download from here – has several optimisations which are only viable due to the typical characteristics of Quake 2 such as support for parallogram-shaped lightsources, BSP ray traversal, and special handling of sky ‘surfaces’ (portals).

Now us you will notice, there is a lot of noise (which is a side-effect to the low samples that are used for the real-time path tracing). From what I know its developer has not used any de-noiser which is a shame. Not only that, but this GPU-based pathtracer does not take advantage of the RTX2080Ti tensor cores.

What ultimately this means is that this special version of Quake 2 could run significantly faster on the RTX2080Ti. Thavex has used an an i7-6700k (overclocked to 4.7Ghz) alongside the NVIDIA GeForce RTX2080Ti and ran the game at 1920x1080. It’s not entirely smooth but keep in mind that we’re talking about full path tracing in real-time.

Here is hoping that someone will resume development for this GPU pathtracer so that it can take advantage of the Tensor Cores (a de-noiser filter would also be a welcome addition)!