When was the last time you played a truly awesome stealth game? The answer to this question for most people is going to be perhaps Splinter Cell: Chaos Theory (though Thief III: Deadly Shadows was also good). With the Splinter Cell franchise becoming more action oriented, the lack of stealth games will be immediately noticed. Well, Dishonored has come to fill that – possible – gap.

Dishonored is a first person stealth, multi-platform game that was developed by Arkane Studios and published by Bethesda Softworks. It was released on PC, Xbox-360 & PS3 in October 2012.

In Dishonored, we take the role of a supernatural fugitive assassin who possesses a variety of supernatural powers. An example would be the power “Blink”, which allows us to travel from one spot to another instantly, as long as we have an unhindered path towards the travelled spot. On the other hand, those who prefer to be violent and stealthy can use “Shadow Kill”, a power that turns corpses – left by the player – into ashes. These powers require artifacts or “Runes”, and the player has full control over what powers they wish to acquire.

Dishonored features conventional weapons too – like a sword, pistol & crossbow – that can be upgraded to give an extra edge in combat. The crossbow features sleeping darts which are useful for knocking out enemies in case the player desires a non-lethal playthrough. The pistol & crossbow have special incendiary ammunition which can be used in tight situations. The sword is always equipped on the right hand. It is possible to break falls by falling over anyone, and killing him in the process. There is also a ‘counter’ system with which the player can block an attack with the sword, thus giving him a short window of time to react. With an upgrade, adrenaline can be built up quickly to trigger fatal dismembering attacks. ‘Bone Charms’ are available which add specific attributes to the player. For example, ‘Undertaker’ allows you to move faster with corpses.

The story starts off with Corvo, Queen Kaldwin’s bodyguard delivering a letter to her. While Corvo is visiting the Queen, the guards leave without being spotted and a band of assassins murder the Queen, kidnap the Queen’s daughter Emily and leave Corvo behind as a suspect. After the deed, The Royal Spymaster and The High Overseer Campbell arrive at the scene and pin the murder of the Queen on Corvo and he is taken to Coldridge Prison. The Spymaster himself tells Corvo the truth; that the murder was pinned on him and that the Queen was weak and had to be removed. Six months later a guard gives Corvo a note, and the key to his cell. The note instructs him to escape and meet up with the Loyalists. The aim of the Loyalists is to put Emily back on the throne. After meeting up with the Loyalists, Corvo’s journey begins. Also after his escape, a supernatural figure called ‘The Outsider’ gives Corvo his mark which enables him to have supernatural powers.

Gameplay wise, Dishonored feels like a HUGE puzzle (or think of it as small sandbox levels). There are simply several paths to an objective. Dishonored also cuts down to how you play it. You could play on the easiest difficult with all the HUD elements turned on and be ‘spoon-fed’ towards your objective or you could simply turn the entire thing off and play on the hardest difficulty. Playing on the ‘Easy’ difficulty, you can walk in front of guards without them seeing and on the ‘Very Hard’ difficulty you drop a vase and a bunch of men rush to your position. The enemy on ‘Very Hard’ clearly has peripheral vision, and the player can be detected on some balconies with guards patrolling towards them in the distance. All they need is a clear line of sight. The game also rewards creative gameplay. For example, there was a side-quest in which I was supposed to save someone. Instead of that though, I knocked him out and the game simply told me to carry his body to a safe place. There are several books and notes scattered around which tell us more about Dunwall & the mission objectives. Some notes contain vital clues to codes for cracking safes.

There is also a nice variety of enemies. Normal guards are equipped with a sword & pistol, while the higher tier ones are equipped with a mask, a sword, a pistol & a grenade. Why do they wear a mask you ask? But because it offers protection from ranged weapons, and let me tell you that they won’t hesitate to throw you grenades (on ‘Very Hard’). You can also find high tier guards with the ability to block the player’s powers. Alongside these high tier guards, dogs are seen patrolling. There is an even higher tier of guards called ‘Tallboys’. These are heavily armored guards in tall mechanical legs with incendiary arrows. Apart from the usual guards, a band of assassins are also encountered who have supernatural powers. They make extensive use of ‘Blink’ and use a power to draw the player towards them. Special characters, rather assassination targets, are encountered on whom powers like ‘Time Bend’ don’t work. People infected with the rat plague, in the last stage of the disease before death also form another kind of enemy called ‘Weepers’. Weepers simply run towards the player and vomit, causing damage (something that cannot be blocked). In ‘The Flooded District’ however, players can find people who are also in the last stages of the disease but decided to hold on to their humanity. Other than these, rats – in huge numbers – can be found who attack the player on approach.

Dishonored performs quite well. The game is built on the Unreal Engine 3 and users across various specifications can enjoy this title at sweet sixty frames per second. For the PC user who is used to eye-candy graphics, the game might be harsh due to several low-resolution textures on various objects, but overall the game looks really good. The animals (dogs, rats) have been given a different, unique design. The texture streaming variables are not aggressive enough, and popping textures can be noticed here and there. In addition – and because of the game’s strict memory saving variables – the corpses may disappear too quickly. Unlike the devs of Transformers Fall of Cybertron & Spec Ops The Line, Arkane chose to not encrypt their .ini files, meaning that graphical tweaks. These tweaks make the game better, and the texture issues can be solved via editing the correct lines. A few of tweaks which I used are given below.

Locate the ini file by clicking Start, then going to Documents. In Documents, navigate to My Games\Dishonored\DishonoredGame\Config
Open DishonoredEngine.ini and search the lines below,and change them accordingly. 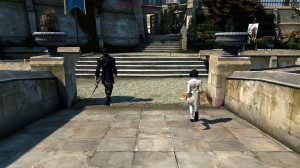 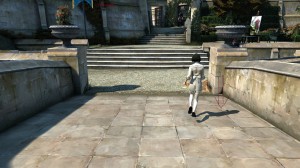 It seems that the devs did not intend to have Ambient Occlusion & Motion Blur on their game (at least that’s what I could make out from the .ini files). Because of the lack of AO, the shadows casted by buildings may look bland. Hopefully Nvidia may come up with proper AO bits to resolve this issue. The lack of AO could perhaps hint to a console limitation, or that Arkane wanted people with low-end solutions to enjoy the game as well. Rat Shadows when enabled from the in-game menu might not actually be working, and this has to be enabled via changing the appropriate line in the config file. The main menu’s FOV limit is 85, but the config file can be tweaked for desirable values. Some people may call this a console port, however Q & E have been used for peaking left and right, and there are 10 shortcut keys to items. The only message I get from this is “Love to PC gamers”. Honestly, peaking left and right could have been much more horrible if you had to – let’s say – press V, and then A & D.

Now there is probably another question most people have in mind. Is Dishonored a unique title?

For some, Dishonored is not unique as its mechanics are somewhat similar to those of Bioshock. In fact, some could say that they are too similar. But let’s put a smart argument forward, shall we? Can you possess a fish and infiltrate a building in Bioshock? The answer is quite obvious. In my opinion, both Dishonored & Bioshock are unique titles.

Lastly, there is one clever thing the devs did. While choking a person from behind, players won’t have to look at his expression. I’m saying this because the latest Deus Ex installment, Human Revolution, has takedowns in third person, and the expressions on the enemies’ faces look horrible. Make no mistake, Deus Ex has its own strong points, there is no doubt about that. Dishonored, on the other hand though, offers complete freedom as Arkane does not force a boss fight, something that put off a lot of gamers in Human Revolution. With the upcoming DLC for Dishonored that introduces a challenge system, it will be fun to try and become the best assassin in the world. The tech of the game also felt amazing. By tech I am referring to the inventions of Anton Sokolov, like the ‘Wall of Light” and Piero’s upgrades. The model of the crossbow is actually changed after applying an upgrade.

The one thing many might find lacking is the length of the game. A lethal playthough on ‘Easy’ might take a very short time (ignoring side quests). The length is almost tripled if played in ‘Very Hard’ and on a non-lethal way. And it is only then – while sneaking around – that the player notices the different paths that are available, with each path offering different objects to loot.

Here are a few screenshots from the game, without the HUD. My personal recommendation to every gamer out there who hasn’t played the game yet is to play this title – right from the beginning – without the HUD. It certainly feels great. 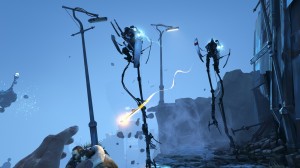 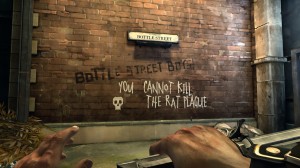 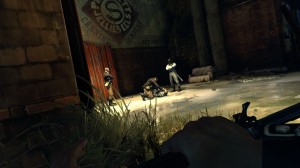 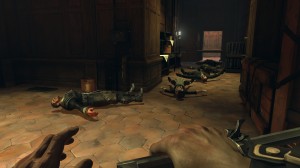 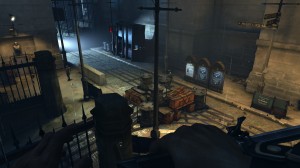 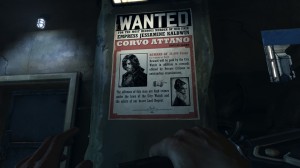 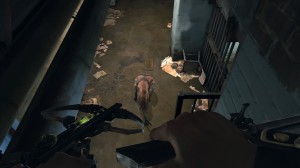 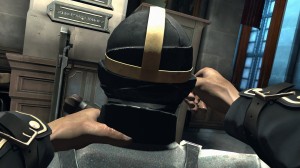 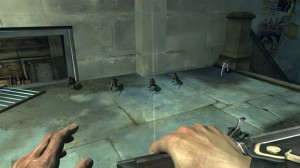 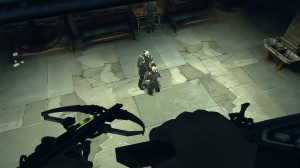 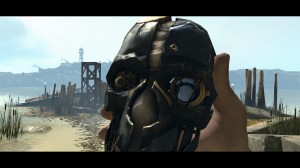 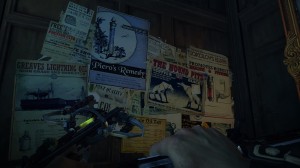 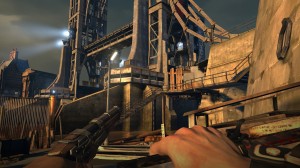 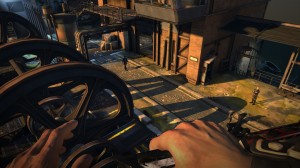 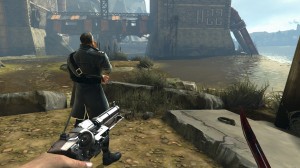 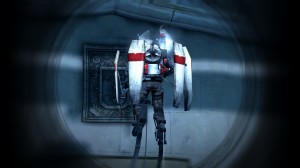