2K Games and Turtle Rock Studios have released the debut trailer for Evolve; an FPS title that aims to blend cooperative and competitive multiplayer experiences as a team of four hunters face off against a single, player-controlled monster. The game is currently planned for a 2014 release on PC, Xbox One and PS4, and looks quite interesting. Enjoy! END_OF_DOCUMENT_TOKEN_TO_BE_REPLACED 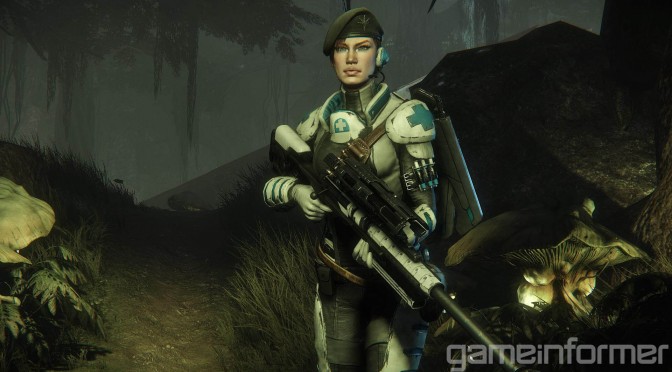 GameInformer has revealed some new screenshots for Turtle Rock Studios’ upcoming title that will be powered by CRYENGINE, Evolve. Evolve is a sci-fi MP title that pits a four-player crew of alien hunters against a separate player-controlled monster. The game is scheduled for a 2014 release on PC and next-gen consoles. Enjoy! END_OF_DOCUMENT_TOKEN_TO_BE_REPLACED

Turtle Rock Studios has released the first screenshots for its upcoming sci-fi MP title that pits a four-player crew of alien hunters against a separate player-controlled monster. These first screenshots showcase the monster that players will be able to control. Evolve is powered by CRYENGINE and is planned for a 2014 release on next-gen consoles and PC. Enjoy the screenshots, courtesy of GameInformer! END_OF_DOCUMENT_TOKEN_TO_BE_REPLACED

GameInformer has revealed its February cover. The game that has been featured is Turtle Rock Studios’ latest MP title, Evolve. Evolve is said to be a sci-fi MP title that pits a four-player crew of alien hunters against a separate player-controlled monster that grows larger and more powerful over the course of matches. END_OF_DOCUMENT_TOKEN_TO_BE_REPLACED

Turtle Rock, the studio behind Left 4 Dead and CS: Source, was bought and then closed by Valve in 2008 and re-opened as a new studio in 2009. Since then, the studio is preparing their debut game that will be published by THQ and as we just found out, it will be powered by Crytek’s CryEngine 3. END_OF_DOCUMENT_TOKEN_TO_BE_REPLACED