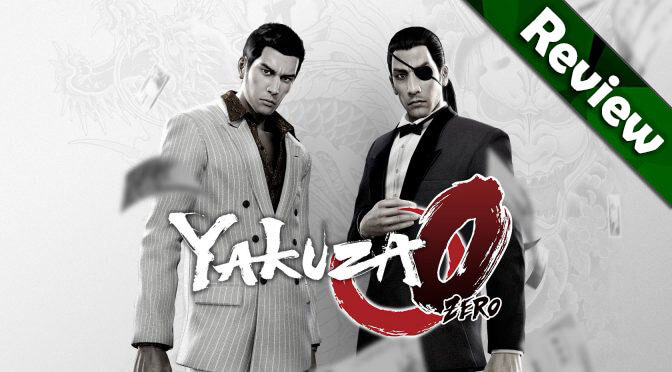 What is Yakuza 0? Well, it’s an ultra-serious drama of Japanese organized crime, murder, and betrayal…except when it’s not. When not serious it’s crazy and kooky and downright silly. Mix the two extremes together and you get the full Yakuza 0, a video-game yo-yo of sorts…and the ups and downs are mesmerizing!

Before we delve into the madness, let’s get some history on this originally Japan-exclusive Yakuza series. The series itself began in 2005 and has seen six main entries, concluding the saga in 2016 with Yakuza 6. The aged Yakuza 1 & 2 have been entirely remade in the last couple years and are set to release on Steam fairly soon.

Getting back to Yakuza 0 (originally released on the PS3 and PS4 in 2015), this prequel tells the origin story of Kazuma Kiryu and Goro Majima, the two main characters that appear throughout the entire series. Hence, this game is the perfect point of entry for the uninitiated to begin exploring the inner workings of the Japanese organized crime world. But how does it play?

“You wanna fight us? You’re a laugh a minute, kid!”
– Yakuza thugs about to be severely beaten.

The actual gameplay is pretty basic: most of your time is spent walking, talking, or fist-fighting. You’ll walk/jog around city streets from story point to story point, and the story itself is told through very well-directed cutscenes.

Between the cutscenes, you’re required to fist-fight and beat down countless bad guys. Speaking of which, let’s discuss the combat system in more detail.

The game features a moderately engaging third-person beat ‘em up system where you can switch fighting styles mid-battle to change up your move-set. On the bright side, the overall combat plays out in a flashy and impactful way, making you feel like you’re a punch-out God. The booming sound effects and visual flashes as you land punch after punch make combat quite the spectacle.

However, the combat has issues and gets old for four big reasons.

Firstly, most of the special moves have unskippable mini-cutscenes, which ruin the flow of combat as you sit idly by while they play out over and over.

Secondly, the movement and attack animations are simply too stiff and unresponsive. Enemies will swarm you, and you can’t react fast enough because of clunky animations and move-sets.

Thirdly, there’s simply way too much repetitive fighting in the game. It becomes actually laughable in a bad way how nearly every game situation is seemingly solved by mercilessly beating your enemies to the ground.

Fourthly, combat balance isn’t good. Certain prolonged battle sequences can be cheesed through by simply stocking up on inexpensive but powerful healing items. Hence, the flow in combat is yet again broken by pausing and using healing items. It’s a shame a more elegant solution isn’t provided.

“I’d sooner ask a telephone poll than
come to you with my problems.” – Goro Majima

So the verdict on the combat is mixed. It’s flashy but gets old quickly. The good news is the engaging narrative and charm of the characters make up for the fairly average gameplay. Speaking of which, let’s get to the heart of Yakuza: the story.

Yes, Yakuza’s main draw as a whole series is the very realistic portrayal of Japanese mafia that you just can’t find anywhere else. Yakuza is so absolutely Japanese in its approach to conflict, crime, honor, and life, and what holds the drama together is the two phenomenally brilliant main characters.

“When you end a life, that’s the end of
any hope of normalcy for you…” – Sagawa

The game tells two interweaving stories, following Kiryu and Goro on their wild escapades as young Yakuza trying to prove themselves. Through many plot twists, you come to respect and love these characters thanks to stellar writing and impassioned voice acting.

Please note regarding voice acting: all the dialogue is in the native languages, meaning non-Japanese players will be reading subtitles. While many players won’t be used to this, this total commitment to Japanese immersion is what makes Yakuza so special.

“…You’re yakuza, no better’n me. Once a man steps into the shadows… he’s black as night till the day he dies.” – Lee

There’s much more that could be said, but if you love an engaging story with mature crime themes, just know that Yakuza 0 delivers big-time.

The best thing I can personally say to convince you is that once the credits finally rolled I had an intense desire to immediately continue the story into the next game (Yakuza Kawami, coming to Steam in a few months hopefully).

Besides the lengthy story, the side-stories are a standout, delivering some of most insane scenarios you can imagine. While exploring the city you’ll help film a TV show, teach a rock band how to truly rock, and investigate someone stealing pants.

Then there’s the very dignified Catfight Club where you place bets as various women such as Naughty Ninja or Steamy Stewardess grab, pound, and claw each other. Stay classy, you Japanese underworld!

Then there are two expansive optional activities, where Kiryu builds a real estate empire and Goro establishes his own cabaret club. The cabaret club is particularly worth exploring since it contains a truly fantastic story arc full of interesting characters and hilarious moments.

But wait, there’s even more content! Yakuza 0’s jam-packed with mini-games, optional battles, collectibles, leaderboard battles, and so on. There’s even a handy in-game Completion List, but most players will likely want to simply enjoy the main story itself.

Other nice features include a cutscene gallery, New Game Plus, and Adventure mode (no story, just exploration).

The game is set in two main city zones, and both are lovingly crafted, providing a very faithful and detailed rendition of late 1980s urban Japan. Taking time to walk around, admiring all the flashy neon signs, artistic billboards, and run-down establishments is quite enjoyable.

“This city is a prison.
How long till I’m free of these walls?” – Goro Majima

The meticulous city designs, immersive sounds, and populated streets all go a very long way in creating a credible world. Everything feels very authentic, which greatly adds to the overall believability and emotional impact of the story.

On a negative note, most of the music is forgettable, with only a couple brilliant tracks (Kuze’s theme is solid rock gold!).

Yakuza 0 is a weird one to review because on paper it doesn’t seem that special, but it’s the power of style that sets this game apart. It’s the total devotion to that style combined with the no-looking-back ultra-confidence of its writing and dialogue. These are what make this game so beloved, so impactful to the player.

“Orders are absolute in the Yakuza…” – Shimano

The developers are clearly aware of Yakuza 0’s absurdity, as if to say, “This is going to be so ludicrous that you won’t be able to look away.” And you can almost hear them taunting us, “Go ahead, try not to smile real wide and laugh when you see what bizarre hi-jinks we’ve planned!”

As such, Yakuza 0 perks up your gaming palette with a spirited double-slap of super-style that’ll leave a smile on your face for some time to come. Despite the tedious combat, nowhere else can you find such a mesmerizingly wild trip between the ultra-dramatic and hyper-absurd. Shine on, you crazy Yakuza!

Playtime: 42 hours total. Nick completed the story in about 36 hours, and then spent another 6 hours finishing some of the major side content.