A lot of Yakuza fans rejoiced in June when SEGA revealed that both Yakuza 0 and Yakuza Kiwami would be coming to the PC. And here we are today with the first official Yakuza game running on the PC. Yakuza 0 is finally available on the PC so it’s time to benchmark it and see how it performs on our platform. 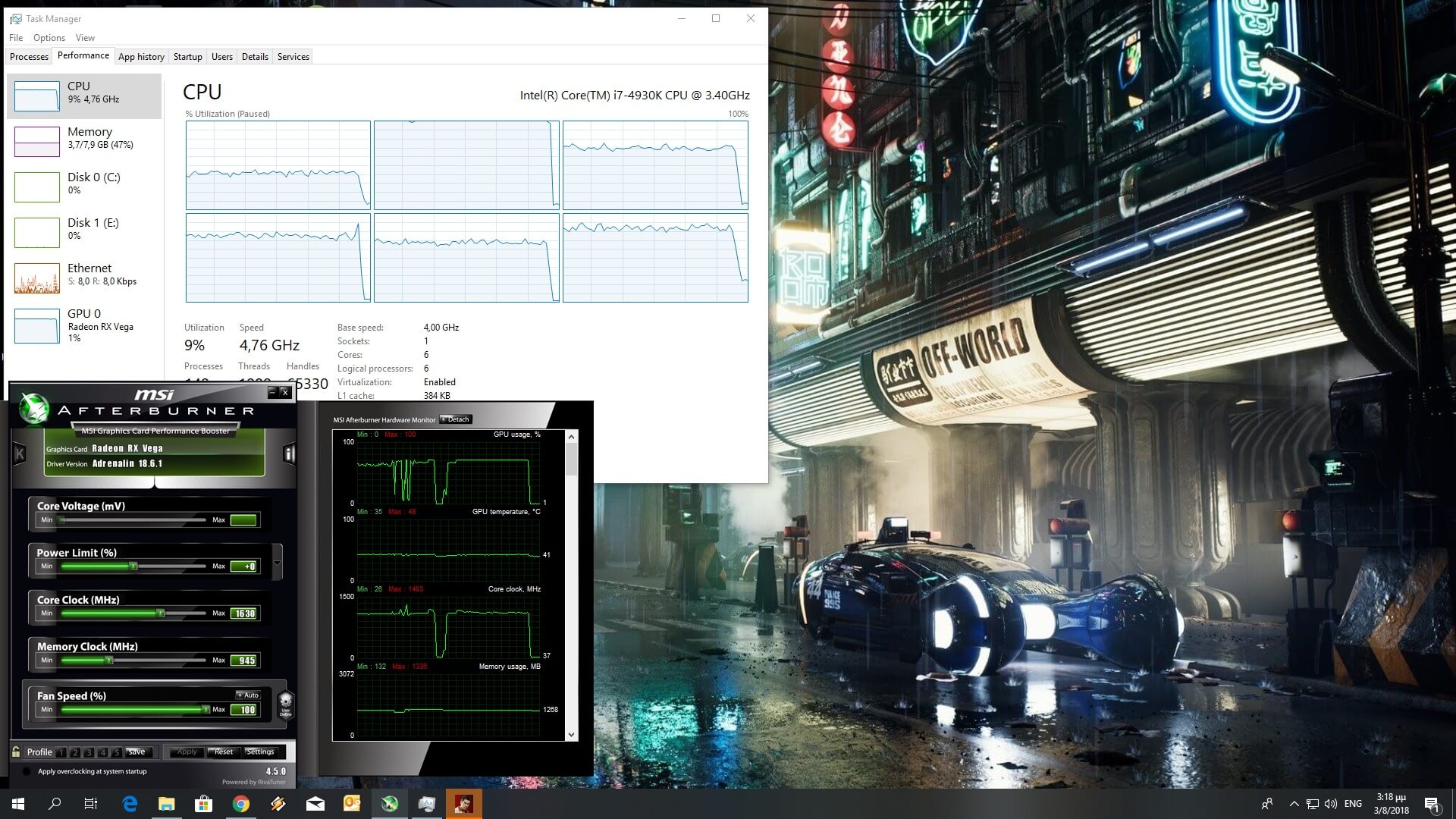 SEGA has added a few graphics settings. PC gamers can adjust the quality of FXAA, Texture Filtering, Shadows and Geometry. There are also options for Letterboxing, SSAA and Render Scale, and the game supports both uncapped framerates and 4K resolutions.

Yakuza 0 appears to be using two/three CPU threads. In order to find out how the game performs on a variety of CPUs, we simulated a dual-core and a quad-core CPU. For our CPU tests we used the hub area at the beginning of the game which features lots of NPCs. Without Hyper Threading, our simulated dual-core system was unable to offer a smooth gaming experience. Thankfully, when we enabled Hyper Threading, we were able to achieve a constant 60fps experience. 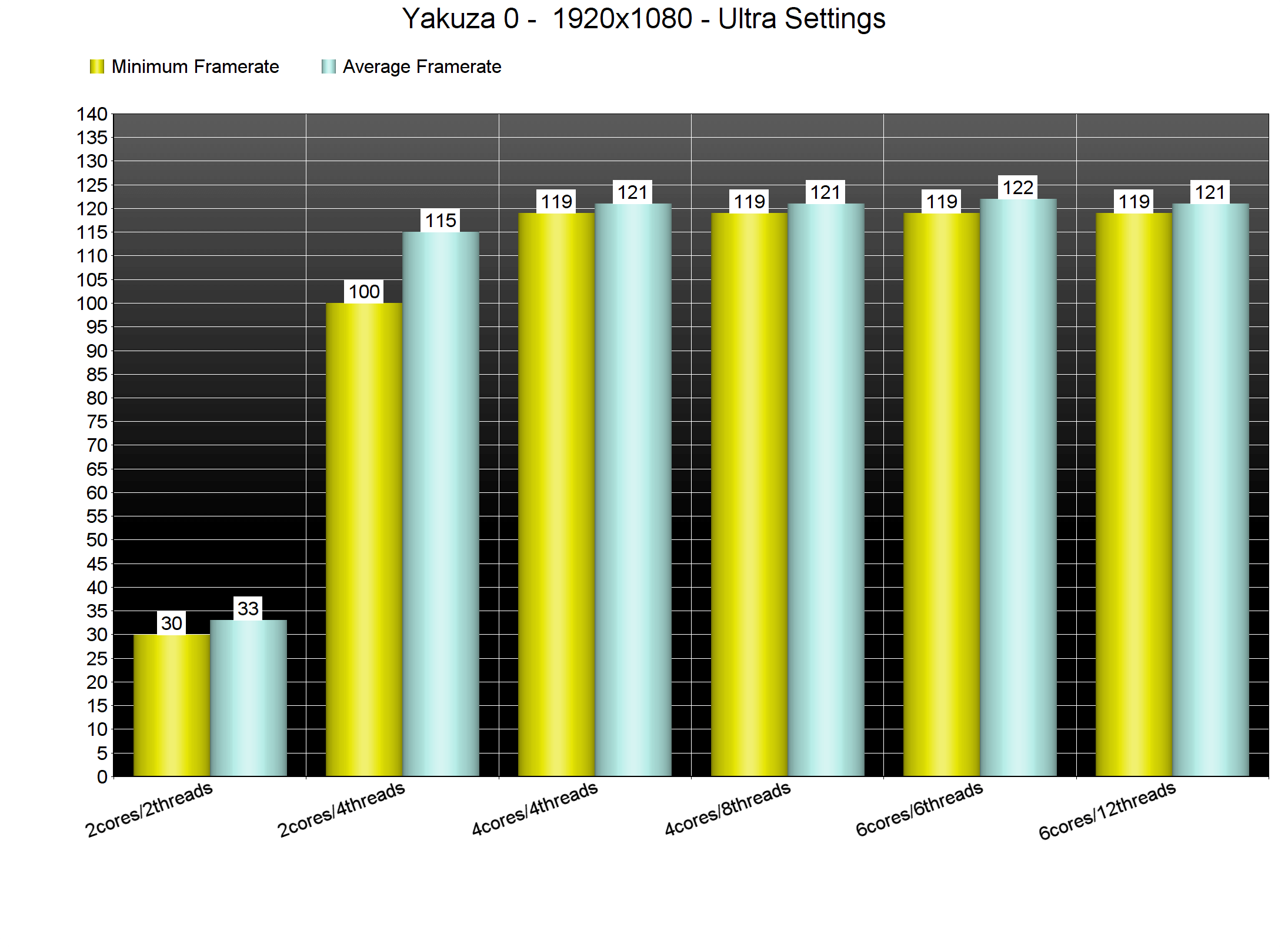 What’s really interesting here is that we were CPU limited in the hub area on both 1080p and 1440p. The game is unable to take advantage of more than three CPU threads, meaning that PC gamers will have to rely on CPUs with better performance per core. Still, our i7 4930K was able to offer a constant 60fps experience.

What’s also interesting is the performance difference between NVIDIA’s and AMD’s hardware on anything less than the top high-end CPUs. On the very same system, the GTX980Ti was able to offer significantly higher minimum framerates than the AMD Radeon RX Vega 64. This is due to NVIDIA’s more optimized DX11 drivers, something we’ve witnessed in other DX11 games too. Unfortunately, AMD’s drivers have a higher CPU overhead than NVIDIA’s drivers, something that has a huge performance impact in multiple DX11 games. 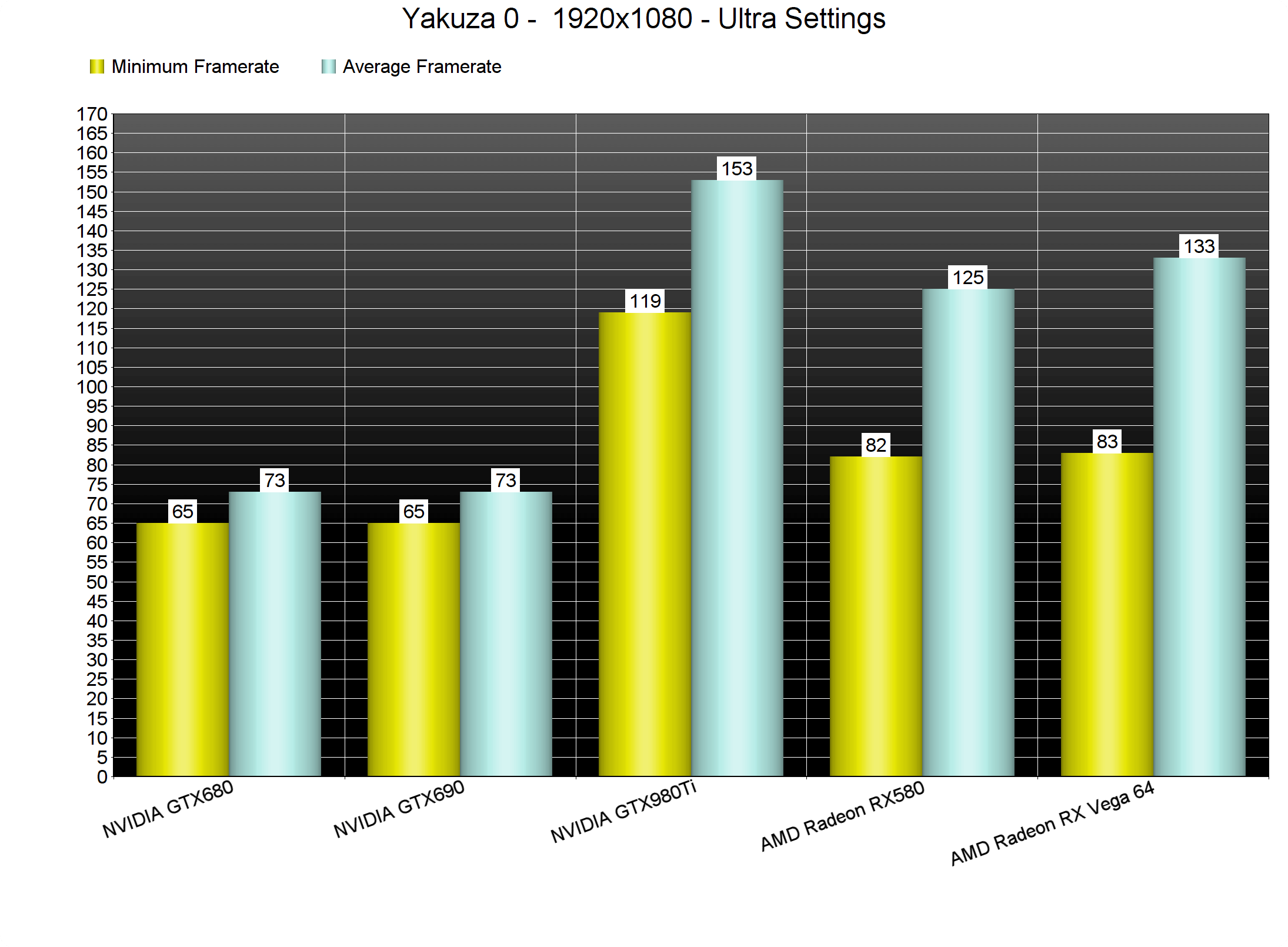 Nevertheless, both the NVIDIA GTX980Ti and the AMD Radeon RX Vega 64 can offer a constant 60fps experience on Ultra settings in 4K. Thanks to its additional raw power, the Radeon RX Vega 64 manages to close the performance gap, however in lower resolutions the GTX980Ti was way faster on our test system. Last but not least, both the GTX690 and the AMD Radeon RX580 were able to offer a constant 60fps experience at 1080p. 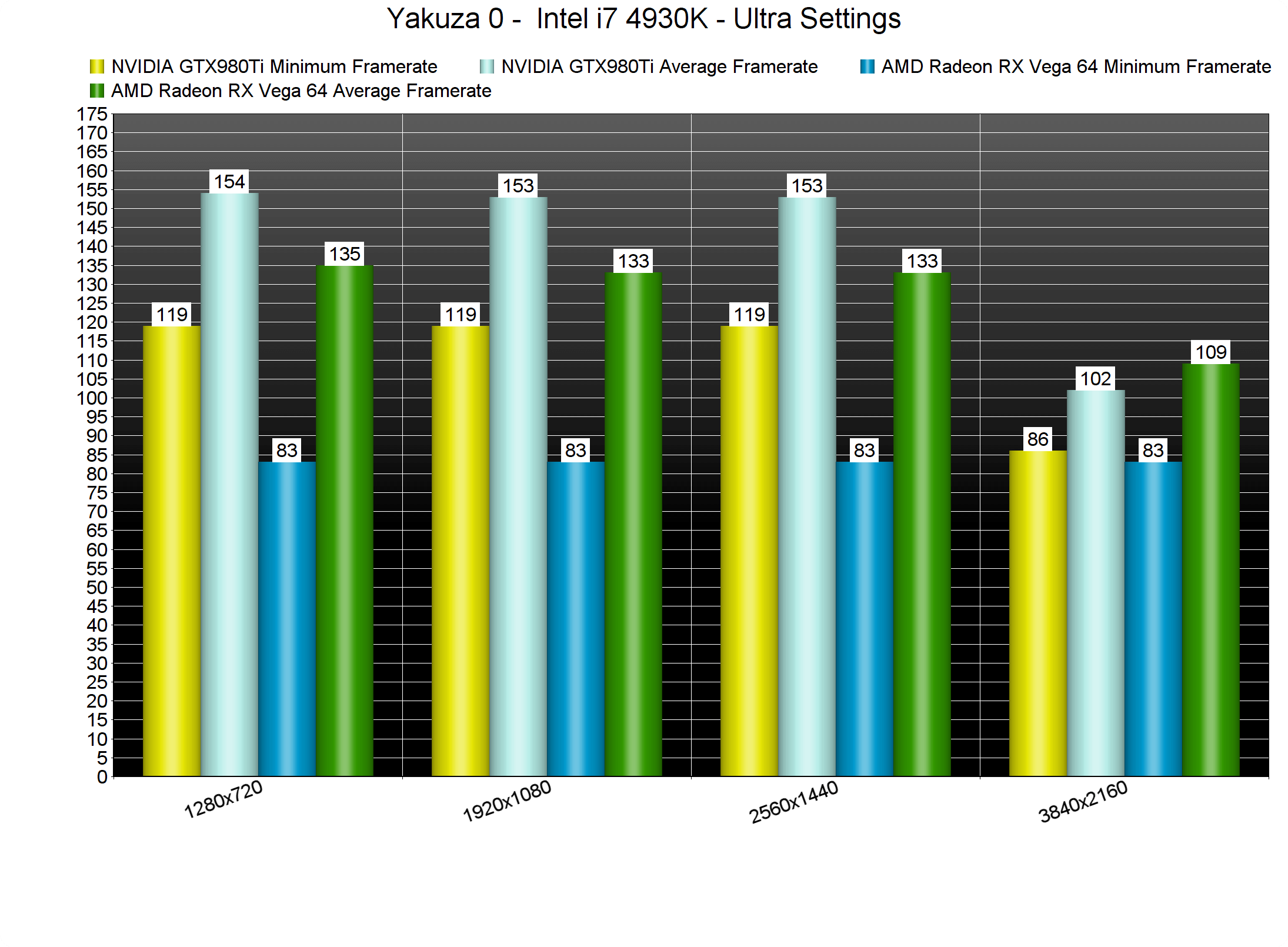 Graphics wise, Yakuza 0 is not particularly impressive. The game features close environments and its number of NPCs cannot come close to those of Assassin’s Creed Unity. Most characters are highly detailed (though we did notice some polygonal shortcomings here and there) and there are some high quality textures for its main characters. Its lighting system and lip syncing are old-gen-ish and you will notice a lot of pop-in issues. However, and even though the game does not push the graphical boundaries of third-person action games, it looks really cool thanks to its amazing art style. 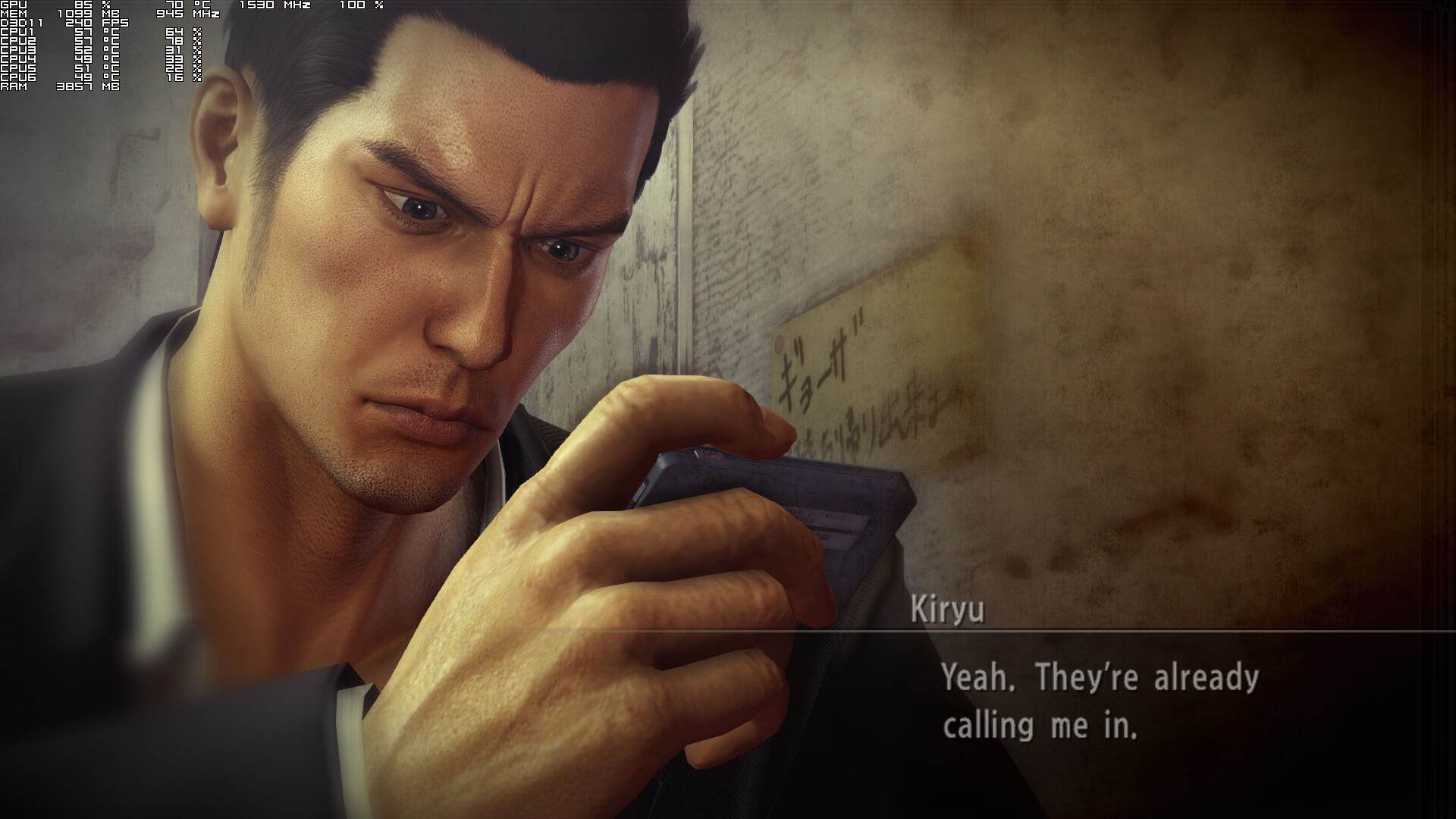 All in all, Yakuza 0 runs extremely well on the PC platform. Despite the fact that the game does not take advantage of more than three CPU threads – and can be CPU limited on a variety of CPUs – it can run with constant 60fps on a wide range of CPUs. The game also does not require a high-end GPU. Furthermore, and despite the fact that this is a Japanese game, Yakuza 0 displays proper keyboard and mouse on-screen indicators. Unfortunately, the port is not perfect as the mouse look feels a bit weird, mainly due to its auto-centering functionalities that cannot be disabled. The game is playable with keyboard+mouse but contrary to other third-person games, it is undoubtedly more enjoyable with a gamepad. We also experienced some startup crashes that were thankfully fixed by verifying the game’s local files.