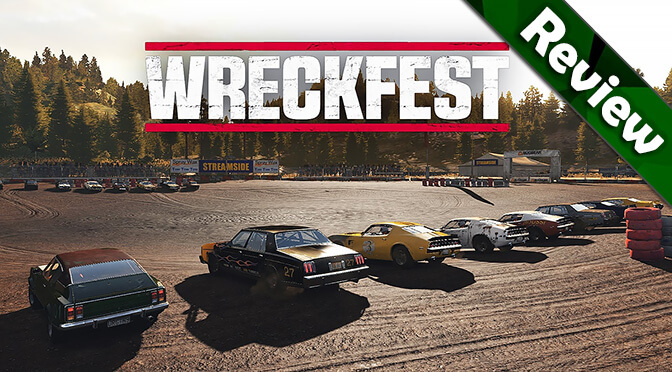 Seeing cars being smashed to pieces will always be the ultimate guilty pleasure of the motoring industry. Human beings are simply fascinated by it. We enthusiastically fork out our hard-earned money to see trucks with giant wheels pulverise entire rows of cars, and a Vin Diesel movie always feels a little lacking without at least ten SUV’s being engulfed in a fiery explosion. So I am kind of bummed that the number of games which embrace a more destructive style of racing has declined in recent years.

Thankfully, Bugbear Entertainment has not forgotten this primal urge we have for vehicular carnage. Their newest entry into the racing genre, Wreckfest, has recently received its full release after languishing in early-access hell for more than four years.

Indeed, this is the same studio that established the much-beloved Flatout franchise until it was adopted by other developers for the last handful of releases. However, Wreckfest is something of a different undertaking for Bugbear since they created a game around the sport of demolition smash up rather than the arcade wackiness that characterised their initial success.

Whereas a series such as Forza Motorsport or Project Cars rewards the player for driving with surgical caution, Wreckfest wants you to get from A to B with as much wanton destruction as possible. Instead of pristine Italian supercars or slick Japanese tuners, Bugbear designed a game around armour-plated, scrapyard sleepers that are capable of taking a pounding. The more smashes, T-bones and wreckages you leave behind in your wake to the finish line, the more Wreckfest will shower you with praise (and XP).

The single-player career is nothing different from most track racing games as you move from one major championship to the next by smashing up the competition in a selection of different events. These include bog-standard, circuit races in which you race laps on dirt or tarmac track (or a combination) to gain XP and credits with each victory. Events also include two variants of demolition derbies where the player must either be the last car still driving, or must turn as many cars as possible into piles of flaming metal within a time limit.

All of the campaign’s modes of gameplay are also available as local and online multiplayer events in which you can enjoy some demolition mayhem with or against your friends, although servers are as empty as a vegan restaurant in Texas nowadays. Still, once I had my moment on the track it was fun to measure my skills against a real human driver capable of holding a grudge for that fender bender I inflicted a few minutes ago.

While Wreckfest never really attempts to compete with the visual production of most AAA heavyweights, the game is still an utter joy to behold even just based on the work the developers have put into vehicular deformation and physics. Seriously, this is the most realistic collision reactivity that I have ever seen in a racing title.

Other developers would do well to emulate how the panels on the cars bend, scratch, or even rip off entirely as your car takes on damage. Bugbear’s impressive physics system actually encourages you to enjoy the spectacular pile-ups with tyres, wood and metal scattering in every direction.

Despite where it may have come from, the handling and AI in Wreckfest leans towards the simulation genre since each vehicle is imbued with a highly unique but responsive feel. The muscle cars may bring out the torque along the straights, but cannot hold a candle to the tight cornering of the compact models for example.

I also noticed that Wreckfest never resorts to artificial means or rubber banding to make gameplay challenging. This makes the driving flow of opponents’ cars more consistent, and experienced players will have the opportunity to cause seriously debilitating damage on NPCs’ rides that keep hogging the lead.

In the single player campaign’s ‘Special Events,’ Flatout fans will recognise something of Bugbear’s old hand for playful vehicular antics. In one event you drive a reinforced lawnmower (and laugh as you run over the driver who fell from the wreck in front of you), and the next you charge at fleeing cars in an actual combine harvester.

And those little three-wheeled cars that Mr Bean hated so much? One event has the player outracing sixteen school buses in one. These delightfully chaotic diversions serve to even out the pacing of the career mode and become outright hilarious at times when acted out in Wreckfest’s physics-savvy engine.

Most regrettably, the game suffers from truly awful audio design with regards to the sound of the engines. As much as I enjoyed the satisfying metallic cacophony from crashes, I mostly played with the volume turned all the way down because even PlayStation 1 games would have difficulty matching the whining, grating sound of the most vehicles. This is really a missed opportunity since a major drawing point of these events in real life is the rib-rattling noise of those V8’s.

It was also strange that the damage inflicted upon my car never seemed to translate into any noticeable handling impediments, which placed the game’s visuals at odds with its mechanics. I was alerted with serious-looking messages such as ‘Critical Damage’ and ‘Front Wheel Bent’ after particularly hard knocks, but I barely noticed a change in my car’s handling (even with damage set to ‘high’). The realism of how cars are deformed by collisions is Wreckfest’s strongest selling point, and the fact that it is mostly cosmetic did make the racing feel woefully superficial at times.

If Bugbear had perhaps  given players more opportunities to explore Wreckfest’s super damage system, this game would have been a star in its genre. Yet, while that unmistakable, destructive fun that popularised the Flatout series is alive and well here, Bugbear’s focus was seemingly centered too much on racing, which puts their game at risk of fading into obscurity between entries with more polished mechanics.

Still, Wreckfest brought a mischievous smile to my face throughout most of my play through and I cannot recommend it enough if you are looking for some gratifying vehicular combat without straying too far into purist arcade territory. Flatout fans, keep your eye on this one.