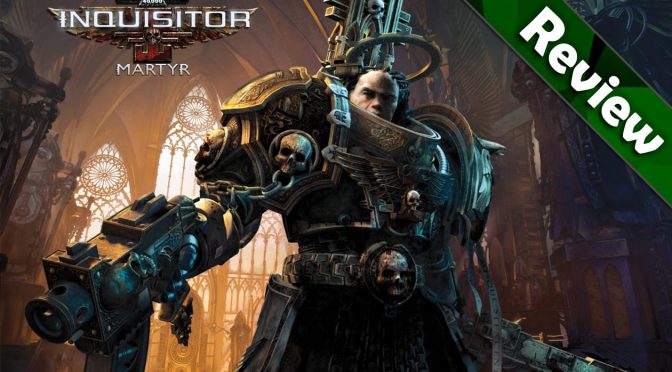 You’re caught in a barrage of gunfire and explosions as you tuck behind the final, nearly destroyed bit of cover that remains. Your suppression gauge nearly diminished, and not much health left, you realize you’re out of shield charges, and only one charge left in your inoculator. You’re waiting for your armor skill to cool down… and there it goes, the cover crumbles. Immediately, you’re thrust back into the fight and hit your inoculator to regain some health. You start laying down suppressive fire until… wait, yes! Armor skill is ready!

An automated turret is dropped at your side and begins annihilating your opponents, at least enough to distract them so you can reach the commander to engage in melee combat and neutralize the threat. After a glorious battle and with only a shred of health left, against all odds, you’ve done it.

Now, onto the next room.

Warhammer 40,000: Inquisitor- Martyr is a new take on the same Warhammer universe that many have grown to love, and the above is the sort of action that sets it apart from other ARPG’s. In a market full of heavy hitters from others of the same genre, it’s a refreshing change to see the tried and true tactical implementation of Warhammer land itself into an ARPG. This game is not without its flaws, of course. And unfortunately, they can be numerous, depending on how you want to look at them. But it’s that sort of action and hard-fought victories that keep it exciting.

You begin with an option of three characters: the Psyker, the Crusader, and the Assassin. Each comes with a choice of three sub-classes. There is no character creator, but fear not, when you’ve made it into the depth of the game a short way you will be able to apply your own touch through armor and color changes. Once you’ve picked your character class and named him or her, you’re off into the galaxy to investigate the source of an ancient distress signal. As an Inquisitor, you will find story progression laid out as a series of investigations. With every new revelation made through these investigations, you will progress to the next chapter.

The campaign itself is somewhat lackluster. Or, at the very least, the poor presentation of it leads me to think so. It’s difficult to escape the feeling of monotony as every single mission plays out the same way; go here, kill everything, read this or talk to this person, then move on. It all blends together in a very dull, boring kind of way, and this isn’t helped by the lack of variety in maps. The worlds are crafted with beautiful detail, but ultimately it feels like you’re stomping over the same old ground again and again.

Getting started can be somewhat of a grind, and it seems unimpressive at first. That is until you start picking up some steam and getting the hang of things. Once you’ve got the momentum rolling, some decent gear and feel well practiced enough in your build, the fun comes with it, even if what you’re working toward still feels like a grind. The difficulty increases substantially as you make it farther into the game, even on normal difficulty. Difficulty can be increased or decreased on a by mission basis, and challenge mode offers incremental increases which result in greater risk and reward.

Inquisitor – Martyr comes with most of the systems you’d expect to find in an RPG. Once you’ve obtained control over your Command Bridge, it will serve as your base of operations and contains all the things you need. From here, you’ll find your starmap, items store, storage, crafting access and more. In character management, you’ll find attribute point input, inventory, and the skill tree. Inventory management is done well, you have more than enough space between character inventory and the storage space provided, and selling off loot is streamlined at the store by offering “sell all X color items” buttons to make sorting by rarity a more simplified task.

The skill tree is inappropriately named, in my opinion, as it offers little in the way of actual skills. What you will find are buffs, and passive enhancements, like + percentage to ranged damage, or + resistance to heat, etc. Each section of the tree is unlocked by completing in-game tasks known as “heroic deeds.” The enhancements offer a great way to fine tune your build toward its purpose, with the ability to re-spec available so you can invest without regret.

The actual skills used on the battlefield are attached to the items themselves. And while I may have had my doubts about this initially, with everything combined, it does end up resulting in a great deal of load-out customization. And with each load-out comes new play styles and therefore, strategies.

Crafting is nicely incorporated, it’s in depth and useful enough to utilize regularly. It makes creating and dismantling easy, and offers a tech-tree to upgrade and further enhance your creations. These tech-tree unlocks do not come cheap, however, and you will find yourself really appreciating the coin you collect. It’s a nice change of pace when a game forces you to think more critically of your spending. Nothing really comes cheap here, and you won’t exactly be raking in the Caligari credits until much later into the game.

Combat, as mentioned before, is unique and enthralling. It provides a great tactical experience, and if the difficulty is set right, it’ll make you work for that victory. The camera has full 360-degree rotation, and sufficient zoom in/zoom out to maintain a good vantage point of the carnage. Oh, and speaking of carnage, Inquisitor – Martyr does it well. It’s unforgivably bloody and messy, and in conjunction with the impressive effects, the war zones and destruction look great. You know, in a terrible, blood-bath kind of way.

The semi-destructible environments assist in this, and add to brutality of it all. You truly feel like a force to be reckoned with as already war-torn and crumbling buildings are completely leveled out in the wake of your power. It is a truly satisfying touch and hard not to appreciate it even as you’re struggling for survival amidst the battle.

During these moments of beauty and satisfaction however are the impossible to ignore faults that can sometimes reel you back from the immersion, or get you killed entirely. While the tactical implementation is a great function of the game, things like the cover system aren’t always so intuitive. It isn’t always clear, especially in the middle of an intense fight, what you can and cannot use as cover. Despite outward appearance, things that would clearly make great cover can’t always be used as such, and this can cause a bit of confusion as you’re sent scrambling from the enemy in search of it.

And then there’s the performance. At the time of writing this review, it is a very poorly optimized game, unfortunately. And these complaints appear to be widespread. I made every attempt I could for it to run better on my 1080ti, but regardless of the setting configurations, I still received wild framerate fluctuations. FPS ranged anywhere from 140 all the way down to a grueling 30, occasionally. In addition to this, the graphical issues are numerous. At times even without framerate drops, some character animations will give you the slideshow effect. And then there are many, many textures that will appear to be flickering in and out of existence. As far as bugs go, I didn’t seem to encounter too many game-breakers. I had two crashes in the form of endless load screens, and occasionally, some phantom weapons firing or completely unresponsive AI.

It does become repetitious. Every instance looks and feels similar with a lacking variety of enemies, and that can make the leveling/loot grind even more bothersome. Luckily, there are some systems in place to help with this and switch things up, such as a co-op and PvP system. The co-op is up to four players, as is the PvP with 1v1 or 2v2 option. There is also what’s called the Uther’s Tarot mission generator. This is a neat feature, and it’ll allow you to play these missions with friends as well. With it, you’ll get to build your own mission and alter odds of specific loot drops, and mission type. Tarot missions are a great way to keep the rank points coming while searching for that rare piece of gear you’ve been hoping to find.

There’s a lot to be said about this game, and there is quite a bit of depth within it. While it can be clunky and awkward at times, the experience overall is a rewarding one, and the gameplay is exciting. As with most loot grinds, the end-game content will continue for as long as the player desires. The level cap comes a long way after completion of the campaign, if you’re so inclined to design the best build you can and compete online, one could surely spend 100’s of hours in-game doing so. And if you’re a die hard Warhammer fan, this representation of it nails the dark, gritty atmosphere perfectly, and it’ll likely be a must have for your collection.

Kyle spent 38 hours in-game. Roughly 22-25 toward the main campaign, and the remainder spent exploring the multiplayer and other characters.