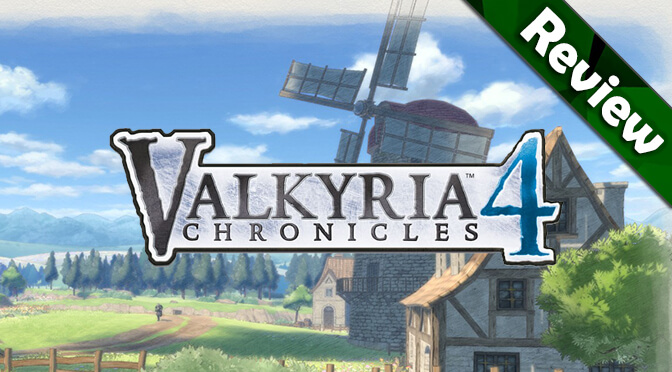 Nowadays we are often overwhelmed by speed. There’s instant access to the world’s knowledge, and advertising is nearly unavoidable. Sometimes we feel like we can’t truly listen and connect with other people, and maybe we feel like there’s little time for even ourselves.

Despite these challenges, it’s so crucial to find some time to relax and find pleasure in our daily life. For me, and so many others, video games are the release from the crazy pace of modern life.

Before we plunge into the actual review, let me share how I came to review Valkyria Chronicles 4.

Unfortunately, lengthy engrossing video games are often the victim of our busy schedules. It’s really tough to find time for marathon play sessions when we’ve only got a few minutes between subway or bus stops. The result is the rise of the quick (often called casual) game. The “kill the baddie and save the world in five minutes or less” game.

Even though most developers follow the trend toward the quick, there’s still the old faithful who believe in serious experiences. Among the them are many Japanese developers creating fantastic worlds mixed with realism and fantasy. They dedicate themselves to forging meaningful narrative experiences, inviting you into their world rather than begging for a few scraps of your time.

The genre I’m speaking of is the illustrious Japanese RPG. These games are a celebration of cultures and mythologies and history from Europe and Asia and beyond. The rhythm of the story is delightfully Japanese, but the source material is all the world!

Honestly though, I’m not really that into Japanese RPGs. From my ignorant perspective, they often look too similar and daunting, and I’m often not brave enough to play them!

But we each must challenge our thinking at some point! So here I am reviewing Valkyria Chronicles 4! I’m ready to change my mind and embrace all the JRPG designs and charms…assuming the game is actually fun. First, let’s begin by examining the history of the series.

The Storied History of Valkyria Chronicles

Given the obvious that Valkyria Chronicles 4 is the fourth entry of the series, it’s crystal clear this is the descendant of a legendary bunch of games. You don’t get to entry number 4 if you’re not doing something right. The series itself was born of the creative minds at Sega and the original game was released on the Playstation 3 back in the distant past of 2008.

The first Valkyria Chronicles infuses semi-realistic European history with steampunk ideals and colorful cel-shaded artwork. The gameplay is turn-based with third-person shooting elements with an overall strategy-JRPG design. The result back in 2008 was something truly fresh and new.

The original game’s story is set in a fictionalized 1935 Europe during World War II. It tells of the peaceful Gallia nation coming under attack because of an important resource within their lands. As usual, many power-hungry invaders cause no end of trouble.

The object of the first game is simple: to defend your country from the invaders. Even though this looks like an elementary plot on the surface, it’s more credible and realistic than expected because of the strong ties to historical real-world conflicts.

The use of anime-like characters with paintbrush-like cel-shading artwork creates such a striking landscape, a compelling juxtaposition of innocence and horror. The stylized historic diaries and trinkets aid in creating a beautiful world you want to defend.

All of the above aspects made the original game, back in the day, a huge success. So Sega, naturally, created a second and third chapter, but most tragically they were for the under-powered Playstation Portable system and only the second chapter was brought to Western audiences.

Partly the fault of limited hardware and limited audience, the two sequels were never able to breach players’ hearts, and the series was seemingly suspended several years ago.

However, many players have dreamed of and demanded a proper sequel to the much-beloved original game, and Sega has finally brought a fourth chapter to us following the huge success of the remastered first chapter released  on PC in 2014 and PS4 in 2016.

Now, after that lengthy (and maybe belabored) introduction, it’s time for me to tell you my experience with Valkyria Chronicles 4! Please note I played this fourth chapter with only briefly playing the original game on PC to get a rough idea of how the series has changed over the years.

Set in the same time frame of the first game, this chapter centers around a group of characters called Squad E. They simply desire to bring back peace, and their last hope is to complete Operation Northern Cross to take on the Imperial Capital, in hopes of bringing the war to an end.

More specifically, Claude Wallace and his group of friends are the ones selected to carry out this impossible mission, and they will have to fight hordes of enemies using the best strategies up their sleeves.

Each character in the squad has a different backstory and combat role. It’s up to the player to make the best choices leading to life (hopefully) and not so much death on your side, and it’s enjoyable to learn how to smartly deploy your squad. At the end of each mission, as is typical, you’ll be able to level up and upgrade and improve your squad.

A welcome feature is that the difficulty level can be changed at any moment, allowing the less tactically-minded player to complete a thorny combat scenario and advance the story without much trouble. So don’t be too concerned by the strategic aspect of the game.

Some may be put off by the generic anime look of the many brave lads and cute girls, but actually the game provides a deep narrative experience. This weaving story may also appeal to those less interested in this style of game because each character, as stated earlier, feels interesting and real. Hopefully, at least a couple characters will connect with you as you trod along the path to glory.

Although very similar to the original 2008 chapter gameplay-wise, the game still feels fresh and new thanks to new classes, strategies, and various improvements here and there. And the great mix of different gaming styles (third-person shooting, real-time strategy, turn-based planning) is as engaging as ever!

Even when the mission objectives feel stereotypical, the game never feels boring to me. Au contraire! The game was a real pleasure. It was even a pastime; a way to relax and think and play. And I really enjoyed the soundtrack (by the famed Final Fantasy Tactics composer)!

Part of the reason I find the game so enjoyable is because each turn gives the player enough time to understand what is happening and find the best strategy. And the numerous dialogue and banter comic-book style cutscenes truly give a depth to the story, making me want to plan and execute and lead my people to victory!

Like the character Claude, who loves to appreciate the simple things in life, I found myself loving to read and digest each line of dialogue, find the best strategy, watch every cutscene and be empathetic with the different characters. I didn’t just play the game, I felt the cause! And that’s very high praise!

Time for the Conclusion

Nevertheless, we must come back to where we started. Life is busy these days. Many of us have little time, and playing a game like this assuredly requires time, much time! But your time will not be wasted!

The story will (hopefully) cause you reflect on war, how it is a terrible thing, and how you can see the pain it brings through the eyes of each one of your friends.

This a great game with plenty of creative strategic choices, relatable characters, engaging dialogue, and a grand story of peace, power, and perseverance. This is a game to savor, to invest in, to go on a great adventure in.

Valkyria Chronicles 4 is unusual, deep, educational, ethical, addictive, and an unexpected game. If you already love the series, you’ll love it even more after this. If you’re a new player, like me, I must strongly recommend this game to you, especially if you might not usually bother with this kind of game. Valkyria Chronicles 4 has changed my mind, and it can change your mind too!

Playtime: 60 hours total (and counting). Mathieu completed the game and is still playing!