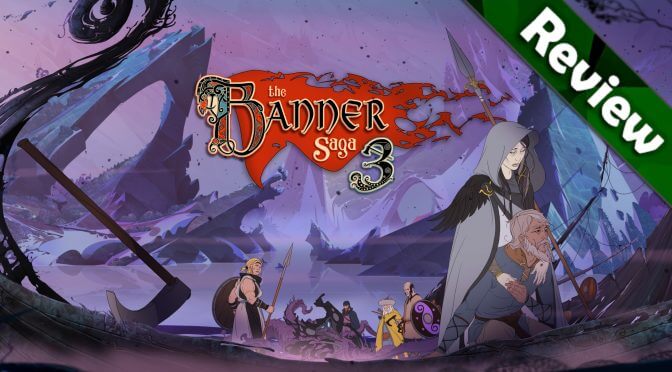 First introduced to us back in 2014, The Banner Saga made big waves across the indie scene where it was a hit among gamers, receiving mostly positive feedback. It can be easy to forget how far we’ve come in such a short time with creating an arms wide open acceptance to things like early access and crowdfunding, establishing a solid foothold for the little guys to make a name in the industry. It is games like this that make me glad for it, and while not all of them may be successes, and we’ve certainly had our share of blunders, The Banner Saga has made a name for itself as nothing short of brilliant. So, does the third and final game of the series serve as a worthy finale?

The Banner Saga 3 is a direct continuation of the previous story like the one before it. And like the second iteration in the series, you can import your save to carry on the decisions made from games prior. If you’re reading this as a veteran of the series and have enjoyed the previous games, this one is not likely going to be an exception. You won’t find any major or groundbreaking changes to the gameplay, but with this in mind it’s safe to say that most who enjoyed the first two will enjoy the third. I will try to break things down in a way that can be helpful for veteran players and new-comers alike.

The game will begin directly where the previous left off, and with the world nearly engulfed in darkness, Arberrang stands as the final fortification against the Warped. The once great city is in shambles, though, there are far too many crammed within its walls seeking asylum. With diminishing supplies and broken leadership, chaos erupts frequently as a result. Meanwhile, across the map, Juno ventures into the darkness along with her party under the protection of a spell of light, hoping to put an end to these tragic events once and for all. Throughout the game you will transition between the parties and be faced with equally challenging decisions for both, with results of those decisions having an effect on the outcome of the story.

It’s easy to feel the overwhelming sense of despair and hopelessness that the game portrays. The Banner Saga 3 will have you clinging to the dialogue in the same way you may read your favorite book while hanging at the edge of your seat in suspense of what’s to come next. The superb writing and storytelling has come to be expected of the series, and it doesn’t let down here.  In-between major events, there are often multiple characters nudging for your attention to pull you aside for more one on one discussions. These conversations dig deeper into the character development of that individual, and can make later choices pertaining to them even more difficult on the conscience.

The choice-driven narrative, one of the series most noteworthy features, will leave you with many tough decisions to make. You’re often left wondering if you’ve made the right choice, but another selection may very well have led to death of a beloved character, among other outcomes for all you know.

Even as you traverse the world in your caravans, there are frequent dialogue pop-ups that will force an on the spot decision from you. What’s especially great about these instances is that no matter how minor they appear, their impact can be lasting for better or for worse.

At times it may gain you and your clansmen valuable supplies, raising morale and extending your survival another few days. With others, your choices can quickly enter you into a fight, and can you really afford to spare precious resources and troops in a potentially avoidable conflict, with people just trying to survive as you are?

As with its predecessors, the artwork and sound are fantastic. It’s very easy to become enthralled by the story when you have the assistance of the outstanding visuals provided, and background sounds that play in sync with what you’re reading. The attention to detail is hard to miss and is certainly appreciable, it speaks for itself.

The Banner Saga is a fantastic example of how simplicity can equate to greatness. The gameplay for instance, there really isn’t much to it. The turn-based style combat is simple to learn but more difficult to master, it provides a great variance in strategic tactics and a fun challenge even at the normal difficulty setting. The consequences of battle require you to do your best, because you never know when you may get the chance to rest again, which will heal the injured.

In this game, Stoic has added a wave-based system to the combat that will allow players to push their luck for greater rewards, or bail out between waves before reinforcements arrive. Making it to the final wave can be challenging and you will risk having more of your team injured as a result, leaving you less prepared for your next encounter.

The character menu offers the depth to provide meaningful upgrades to your team while keeping it simple enough to where the player won’t feel overwhelmed by the amount of characters needing attention. Travelling around the world occurs as an automated caravan, where the player will make dialogue decisions and monitor the caravan’s status, so there is no open exploration or anything of the sort.

For a lot of the reasons that players will love the game, others may not take to it as well. The pacing can be slow and casual, and there is very little voice narration or cinematics provided. Players who don’t want to read much during their games will want to steer clear of this one. Even the combat is rather slow paced and doesn’t concern itself with overly flashy action or animations.

New-comers to the series will be able to pick it up here if they so choose, though it wouldn’t be advised. There is an available re-cap video in the main menu that will give a brief summary of events to get players somewhat up to speed, but it doesn’t cover nearly all the details that would be missed by skipping the first two. For someone first stepping into The Banner Saga, I would recommend kicking it off at the beginning to gain a full understanding into the events unfolding in the third and really explore the character development. Since your decisions carry directly over from one to the next, it will make the finale that much more meaningful. And for those who want to, the entire series can be played through multiple times to see the various outcomes or try a more difficult setting, providing some replay value.

So long as the player understands what they’re getting into and have their expectations right, it’s a very enjoyable story! The simplistic casual gameplay, the captivating story-telling, and a musical score that’s perfectly fitting, there’s not much to dislike if you’re a fan of story-rich choice driven games.  The Banner Saga 3 is a memorable roller coaster ride of an experience and a wonderful conclusion to the tale, and with multiple outcomes available, it could get even better depending on how it’s played!

Father of two and avid gamer, Kyle made his switch to PC gaming about a decade ago. In that time, he developed his obsession with performance, but has no regrets... Yet. In his spare time he is taking his family out on outdoor adventures, exploring the trails in his Jeep, and trying to catch up on playing his over-bloated Steam library.