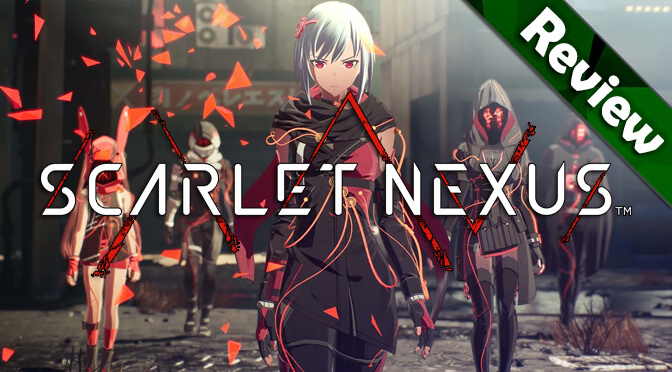 Don’t let Scarlet Nexus deceive you. While Bandai Namco’s June 2021 release may present itself as another run-of-the-mill JRPG, this game is quite eager to bend the rules of this genre. In fact, it tries so hard to pass as a third-person action game that I wondered if the developers were making a subtle anti-JRPG statement.

Whatever the case may be, Scarlet Nexus still comes together as a remarkable, anime-infused, action-packed romp. The development team have mixed up an interesting cocktail that blends JRPG narrative design with well-loved mechanics from fast-paced action games, and the result almost feels like playing two complimentary genres at once.

Being mindful of the world

Scarlet Nexus introduces the player to the idea of a ‘brainpunk’ universe in which human beings have found a way to awaken dormant psychic abilities with technology. In this cutting edge civilisation text messages are sent with telepathy, while billboards and street signs are projected into the population’s internal heads up display.

This is the immersive backdrop that Bandai Namco have set for their game’s ‘teen recruits’ anime drama starring two playable characters, Yuito Sumeragi and Kasane Randall. Both Yuito and Kasane’s psychic abilities show potential use in combat scenarios, and the game begins when they enroll to a special division known as the OSF – the Other Suppression Force.

‘Other’ in this case refers to the bizarre-looking antagonists of this game which are essentially zombies that plummet from a mysterious entity hanging in the sky. Normal varieties of firepower are useless against the Others but psychic attacks, on the other hand, work just fine. The OSF have therefore represent humanity’s protectors and the last line of defense against having their brains devoured.

A tale of two heroes

Whereas JRPG’s are notorious for protracted gameplay and story, Scarlet Nexus generally plays out as a more compact and streamlined package. Bandai Namco have trimmed the genre’s storytelling format down to its essence so that the player moves more briskly from one key narrative moment to the next.

As such, Scarlet Nexus defines itself as a game where character selection has a significant influence on the player’ s story perspective. Rather than an epic sixty or eighty hour marathon, choosing either Yuito or Kasane will result in a shorter but distinct play-through of a mere thirty or so hours.

Their lives are deeply interconnected, they share the same environments, and they even encounter one another in numerous moments throughout the story. However, Scarlet Nexus has rather excellent replay value because Yuito and Kasane are nothing alike, and they both experience events in a highly unique way. You’ll definitely want to play this at least twice.

Anime fans will notice immediately that this game borrows enthusiastically from shows such as Bleach or Attack on Titan, and yet Bandai Namco’s writers still created several gripping twists and turns in this narrative. Time travel, dramatic losses, unlikely bonds forming between characters, jaw-dropping betrayals – you will find them all here.

A battle of wits

Another area where Scarlet Nexus defies its JRPG overlords is in the mission structures since they unfold in a highly linear fashion. Enemy territories and hub worlds are huge and players that go wandering will be rewarded with a few additional goodies (and some insipid side missions), but mostly I ignored this aspect. The large scale of most environments is primarily for immersion, and they work well for the most part.

The core gameplay is much more centered around embracing Yuito and Kasane’s combat skills as newly-minted members of the OSF. Yuito is a psychic swordsman and slices through the Others so stylishly it would make Devil May Cry’s Dante sexually aroused. Kasane, conversely, uses her telekinetic powers to whirl winged, boomerang-like knives around her body much to the same effect as Yuito’s sword.

While controls are relatively simple for both characters, the combat in Scarlet Nexus is a highly elaborate spectacle. Yuito and Kasane only have a basic melee combo readily at hand, but the enemy encounters really come into their own once players learn how to layer their attacks with flashy psychic abilities.

Moreover, Yuito and Kasane are almost always travelling in a group and their companions are always keen to lend a hand in the psychokinetic fisticuffs. During combat they can summon a companion’s power at will which gives their weapons unique characteristics and specific advantages against enemies.

Shiden Ritter specialises in electro-kinesis so why not activate his power after dumping a water barrel onto a boss for much higher damage and stun perks? Some Others have a hard exterior shell which could shatter more quickly with brief spurts of high damage. Here I called on the Kyoka Eden with her ability of duplication for more potent, close range attacks.

Feel like combining electro-kinesis with the duplication ability? Try it, and add hypervelocity for fun!

Scarlet Nexus is perhaps a little behind the times in terms of visual technology, but it still looks and sounds pretty good. The soundtrack is particularly enthralling as jazzy, lo-fi beats massage your ears during more chilled moments while upbeat drum and bass swells take over during combat.

The only real shade worth throwing at this game has to do with pacing. Specifically, there are too many moments that feel just a little dragged out and dialogue sequences are probably the worst offenders.

I occasionally had to fight the temptation of the ‘Skip’ button during particularly chatty scenes because, damn, these characters can just go on and on if you let them. While this kind of thing might fly in a normal role-playing game, in Scarlet Nexus this feels out of place.

This game also tends toward overloading the player with tutorial screens during the early stages. At least their content is usually relevant to the gameplay in that moment, so I cannot really deduct points for this one. Just consider this a friendly warning that you are in for a massive information dump.

Using all of your brain

So there you have it. Scarlet Nexus is well worth your time because of how well it walks the tightrope. On the one hand, this game is too invested in deep, unabridged storytelling to pass as your average action game. On the other, it never fully commits to its JRPG heritage and keeps a finger on the fast forward button.

Instead, Scarlet Nexus lives in the middle territory between them. While a few moments do stretch out a little bit too long, boredom is not an accusation that I can throw at this game. It feels like everything constantly builds up to a new crescendo in terms of both combat and story, and with the prospect of two distinct protagonists, I got to do it all twice.