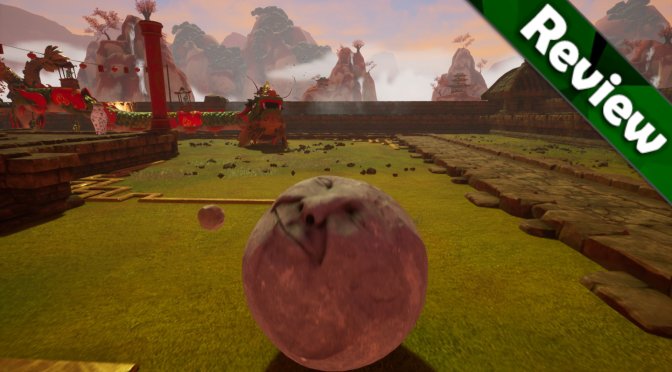 Rock of Ages III: Make & Break is virtually impossible to describe in one sentence. The official blurb mentions something about “competitive arcade action meets tower defense”, and that the game takes inspiration from Monty Python for its humour. However, this doesn’t even begin to describe how this third entry mashes together different art styles, gameplay genres, and even musical tastes. This is one quirky and whimsical game.

Like the much-beloved previous entries, Rock of Ages III returns to the classic ‘marble-rolling’ arcade genre where the gameplay basically revolves around steering a sphere along a tricky course. What sets this particular experience apart is how developers Ace Team and Giant Monkey Robot have blended this gameplay with an unexpected choice of mechanics and visuals. Normally this is a recipe for a jack-of-all-trades-master-of-none type of game, but here this duo of indie studios have somehow pulled it off.

As a complete newcomer to the Rock of Ages series, I was dumbstruck when the game opens, and the first objective is to bash open the mouth of a cave by using a ball made of… sheep. I cannot believe I just wrote that sentence, and this was only a taste of the madness that would soon follow. During later stages of my play-through, I also encountered aggressive lions hanging from balloons, herds of sticky cows, and faces carved on giant balls of rock, jumping around on trampolines.

The reason for this unabashed wackiness is that Rock of Ages III offers something of a farce on world history and mythology, so the developers have based their game’s visual and story design on historical artwork. The game’s plot is itself based on ancient Greek pottery, and follows the epic of Odysseus and his crew making their way home from the Trojan War. As was told in The Odyssey, the company become trapped at some point in a cyclops’s cave, which explains why your first weapon is a ball of sheep. Sort of.

Here the game tries to give a basic tutorial, but it doesn’t really pay off since many smaller details – such as the HUD, controls or lesser gameplay mechanics – are barely explained. Perhaps the developers were too scared of boring long-time players, however I doubt newcomers will have a serious problem with figuring out the basics as the game goes on.

Soon after using the sphere of bleating of livestock to bash open the cave, Ulysses and the gang make their getaway from the monster, who happens to be infuriated over loosing his lunch. After lunging a boulder onto Ulysses’s ship – the titular ‘Rock of Ages’ – the angry cyclops complains to his daddy, Poseidon. The god of the sea curses Ulysses’s voyage back to Ithaca, but in this story he makes an oopsie and sends the ship, rock and all into a space beyond time.

This setup leads to the single player campaign which involves sailing over a ancient zodiac map, peppered with dozens of locations. Each one hosts a combination of smaller missions, and a battle against one iconic historical figure, such as Julius Caesar, Genghis Kahn, and a few others that I won’t spoil.

I am not exactly a Monty Python connoisseur, but if there is was supposed to be a link between the series and this game’s story, it went totally over my head. That is not to say I didn’t enjoy the amusing skits that introduce each new historical icon once you unlock their levels. The devs have brought these skits to life by using ‘cut out animation’ from real paintings and classical art, and the hilarious contrast of priceless paintings acting out slapstick humour borders on being meme-worthy.

If, like me, this is your first encounter with this series, the closest comparison to the basic gameplay in Rock of Ages III is perhaps the Super Monkey Ball franchise. Much like Sega’s arcade classic, the objective is always to roll an orb down a selection of tracks as quickly as possible, without falling off the edge or bashing into dangerous obstacles. The only notable difference with Rock of Ages games is that you control the ball (as opposed to tilting the entire track).

As you would expect, one mission type is the all-too-familiar time trial, which the developers have spiced up by turning your orb into a bomb (complete with a sizzling fuse). The aim is to reach the bottom of the track and blow up a castle before the fuse burns up, and you can share you best times online with other players for bragging rights.

As a long-time Super Monkey Ball junkie, this was easily one of my favourite types of missions, and trying to snag the gold medal always felt rewarding thanks to thoughtful designs of the tracks. Plus, the hysterical shrieks and squeals as you plow through the spectators lining the track’s edges also become something of a guilty pleasure the more you play. The game also offers more traditional, competitive racing where you can simultaneously challenge the AI for the finish line in solo mode, or race against other players online.

He protec, but he also attac

The real meat of Rock of Ages III’s single player campaign is, of course, the ‘boss’ levels, which fuse the aforementioned gameplay with tower defense mechanics. Much like the race modes, the objective is yet again to smash up your opponent’s castle at the bottom of the track, but this time there is a second route that runs to your own castle door from the boss’s side. These levels therefore contain two different types of gameplay where the player will be building defenses in once minute, and rolling straight for the opposing castle in the next.

So why not just spend all your time turning your track into an insurmountable death run for Julius Caesar’s rock ball, or just make a beeline for his castle’s front door? Thanks to a few simple but effective mechanics worked into the gameplay, the player has to ensure that their offensive and defensive strategies are kept in balance.

Every round opens with a ‘timer’ wherein both the player’s rock ball and the enemy’s are chiseled out, so neither party can just start bashing each other’s castle. This is meant as an opportunity to mount your defense, and strategically place units like Da Vinci tanks, elephants filled with archers and those herds of sticky cows I mentioned earlier. Placement really matters since certain units can become almost impossible to circumvent if you position them on the right sections of the track.

Once the sphere is ready, the player can either keep gathering resources to strengthen their defenses, or press ‘c’ and roll straight for the opposition’s castle. Hopefully the sphere’s health bar can withstand the traps along the way, and be sure to hit the castle at a decent speed to deal extra damage. This gameplay loop repeats itself until one of the castles fall, and the victor is crowned.

Adding some extra strategy to the whole schtick is that the game gives you a choice of what type of sphere and which units you can take into battle. One sphere looks like the moon with a face, another looks like a fist, and one is little more than a block. Indeed, it doesn’t roll well at all, but the thing is a tank, and has no problem completely demolishing the opponent’s defenses, or taking a huge chunk of health from the opponent’s castle even at slow speed.

Look at the balls on this game

Honestly, this probably reads like a recipe for disaster, but this gameplay actually functions. The tension of watching your fortifications fail and rushing to destroy your opponent’s castle is extremely exhilarating, while the seamless transition between the two types of gameplay makes the experience feel varied and unique. Combine this with highly bizarre visuals and Rock of Ages III really enters into a universe of its own.

As for graphics, well, the game isn’t really worth writing home about, but the real treat lies in the soundtrack. The map between levels is complimented by a beautiful, melodic harp overture, but the levels themselves are given rock remixes of classic and traditional music.

In the Greek levels you get Beethoven shredded on an electric guitar for example, and Eastern levels get the same treatment for Chinese pan flute music. For a game in which a central theme is to poke fun at historical icons, I couldn’t begin to think of a more appropriate choice for musical accompaniment.

Rock of Ages III has also been built with a community in mind, because not only are most gameplay modes available in online multiplayer flavours, the game also comes with a surprisingly efficient level editor. As I constantly remind people, I am more of a player than a creator, but the more talented minds in the player base are already churning out and sharing some pretty engaging track designs, so I guess it is all good.

Take me out to the ball game

Rock of Ages III has its flaws. The controls for maneuvering the boulders are momentum-based, so they can feel characteristically sluggish and unresponsive sometimes – I think I broke my ‘s’ key after hours of frantically trying to brake. The game also tends to stutter something awful on certain levels, so I am relieved to see a steady stream of optimization patches being released by the developers on Steam.

I am also aware that long-time fans of this particular series are less than pleased with this one. Apparently the most common points of contention are that Rock of Ages III doesn’t really add anything new to the series’s gameplay, and that the campaign maps fail to live up to the standard of the first two entries.

I have no way to confirm if these gripes are justified, but as a smooth-faced ‘freshie’ to this franchise, my time with Rock of Ages III was predominantly characterised as enjoyable. The zany design elements endow the experience with a remarkable visual uniqueness, and it is rare to see two totally distinct genres get blended so well into one single game. For anyone who wants to reignite their dormant love for marble-rolling arcade games, having a look at this game would definitely be a good start.