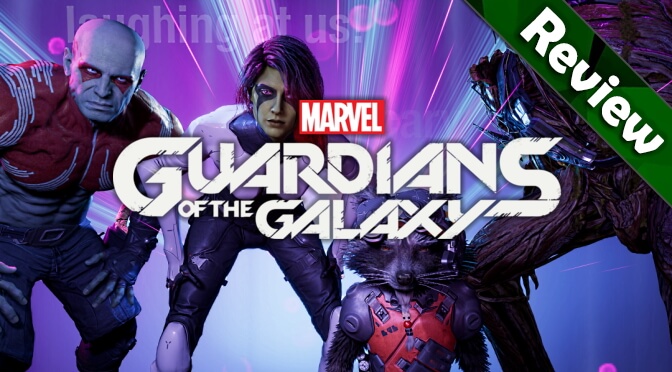 Coming off the Marvel’s Avengers disaster, I expected Marvel’s Guardians of the Galaxy to be another big letdown. Instead, I was delighted by Guardian’s endearing cast, excellent storytelling, and ample charm. Quite simply, it’s a breezy good time that everyone is better off having experienced.

Made by the same developer that gave us the prior two Deus Ex games, it makes sense that Guardians is a supremely well-crafted work of art. Characters and enemies are smoothly animated. The cutscenes are top-notch. The visuals are outstanding, with lush alien environments and shiny space metals. A robust 1980s soundtrack sonically binds the experience together.

Part of what makes Guardians so refreshing is its focus. It knows what it wants to be: a linear, story-driven, team-based, third-person adventure game. The usual AAA filler is absent. There is no equipment, crafting, or even side-quests. You simply enjoy a single-player story played through as the developers intended.

Most impressive is Guardian’s nuanced story of grief, trauma, and friendship. Very few AAA games handle such complex subjects with this much maturity, intelligence, and levity. We are treated to a competent, engaging story of characters with real emotions dealing with how their messy pasts interact with their present feelings and future aspirations.

Adding weight to the complex emotions are dialogue options and gameplay decisions in the style of Telltale’s The Walking Dead. These choices moderately impact how characters feel and change how certain key scenes unfold. Serious fans will opt for an extra playthrough to pick the opposite choices on the nicely implemented New Game Plus mode.

Guardians uses the tried and true three pillars of adventure games: exploration, combat, and puzzles. You play solely as Peter Quill. The three other teammates are AI-controlled, but you can issue them commands. Enjoyable banter keeps the pace going, as you play through the chapters. Puzzles are present but never too burdensome. Combat arenas add some adrenaline, but this style of fighting has been done many times in countless other games. Let’s discuss each pillar in turn.

Exploration is very much a theme park ride design, with each chapter offering something new. Spaceships. Alien planets. Star ports. Secret lairs. Even mystical lands. You’ve seen all these places in many other games, but Guardians renders them all quite expertly.

Combat takes place mostly in arena-style spaces interspersed throughout each environment, and you’re rated for your performance similar to Devil May Cry. You slowly unlock powers over the course of the game, both for Quill and the rest of the team.

The game takes a little too long to give you all the fun abilities and skills, which makes early combat slightly dull. Some enemies seem like bullet sponges, but this usually means you aren’t exploiting enemy weaknesses properly. Excellent difficulty customization allows you to make the game as easy or hard as you want it to be, which is nice.

By the end of the game, battle becomes a fluid dance of death, whereby you run, dash, and hover around while ordering your buddies to slice, crush, explode, and smother your opponents. It’s chaotic good fun but not remarkable.

Simple environmental puzzle solving breaks up the exploration and combat. Each team member has a unique non-combat skill you can order/ask them to use. The challenge is finding the right team member for the right obstacle. While basic, I enjoyed working together as a team. Plus, diligent searching can provide materials to upgrade your skills, collectibles that unlock new dialogue options, and character outfits.

Herein lies Guardians only true fault: you’ve likely played this style of game many times before. In fact, the game feels so much like Sony’s Uncharted series, as strange as that may sound. Both are about the heart and soul of their charming characters where the real reward is listening to the personalities grow throughout daring adventures. The puzzles and combat of each title are there to add some “gamey” elements to break up the narrative. Indeed, one could say Guardians is Uncharted in space. Coming from an Uncharted lover, that’s a good thing.

Issues and Other Thoughts

Early reviewers noted many bugs and glitches, but patches have fixed much. Personally, I experienced only a few issues.  Animation glitches occurred. A few cutscenes had characters stand in wrong places. Some NPC interactions failed to start. One or two combat encounters had to be restarted when enemies failed to spawn. None of the problems were too major, though.

Some game elements are tedious. Slow walking sections get annoying. Crawling through tight pathways is dull. In combat, you can “huddle up” to go into a sort of hyper mode, but the huddle cutscene takes way too long. A future patch to quicken these more tedious elements would be nice.

Keyboard and mouse controls are excellent, but this is very much a “gamepad recommended” title. Robust PC graphics and accessibility options are very welcome. The benchmark tool is helpful, and the adequate photo mode is always nice. Overall, Guardians runs great on PC.

The total absence of a real money shop and microtransactions is so refreshing. Kudos to the publisher. Then again, that same publisher pushed out the atrociously egregious pay-to-win Marvel’s Avengers. Many people will skip Guardians simply because of the perceived connection with that prior game.

The story is longer and more engaging than I expected, but we are still talking about a 15-to-20-hour game. You can easily replay each chapter from a menu selection, letting you find certain missing collectibles or simply enjoy favorite story portions. Still, replayability is limited. One extra victory lap playthrough to choose alternate dialogues is the main “post-game” draw. For some, this is fine. For others, more expansive titles may be a better return on investment.

Comedy is so tricky, but Guardians does quite well most of the time. Kudos to the writers for being funny and heartwarming, often in the same scenes. In fact, it’s astounding that Guardians is not only as clever and witty as the movies but surpasses the films in some ways. Groot has much more personality in this game, and each character’s backstory has more time to develop than in the films. Still, if you’ve seen the movies then you know what you’re going to get regarding tone, humor, and characterization.

This first game is clearly a starter entry in what could be a trilogy of games. What a great time for the Guardians. An excellent movie trilogy is about to wrap up next year, and an equally worthy video game franchise has hopefully just begun.

Guardians is a great game. It features a fantastic story with enjoyable character banter combined with gorgeous locations, logical exploration, and solid combat. There is very little to fault and much to praise. Still, I didn’t love the game as much as my positive remarks may indicate. The main criticism is a lack of innovation. The films already introduced the world to these beloved characters, and many other games have delivered the same play experience, chiefly the Uncharted series. Hence, Guardians gives off strong déjà vu vibes, and some may find it less enticing than something more original.

Nevertheless, I’m very glad Guardians exists, and there is so much to love. We need more legitimate story-focused single-player games without AAA filler and microtransactions. If you adore the comics or movies, buy the game now. If you’re not a super-fan, waiting for an appropriate discount may be wise. Either way, I highly recommend indulging in the charming, delightful, funny, and wacky world of Marvel’s Guardians of the Galaxy.

Playtime: 28 hours. Nick spent about 24 hours on the first playthrough. A few more hours were invested in replaying chapters & New Game Plus.