Confrontation is currently slated for an early April release, and here we are with a – bit late – preview for it. What really saddens me is that this little gem will pass under the radar of a lot PC gamers. Ironically, this is what a lot of old-school western RPG fans have been asking for as Confrontation features deep mechanics, slow-paced and tactical combat, and a nice upgrade system.

The preview version included the tutorial, and a mission from the final version. Confrontation is basically an RPG/RTS hybrid, where players assume control of a group of heroes. Players can take control of one of four different factions; the Griffin, the Scorpion, the Wolf, and the Jackal. The preview version offered us only the Griffin faction which was no other than the humans. 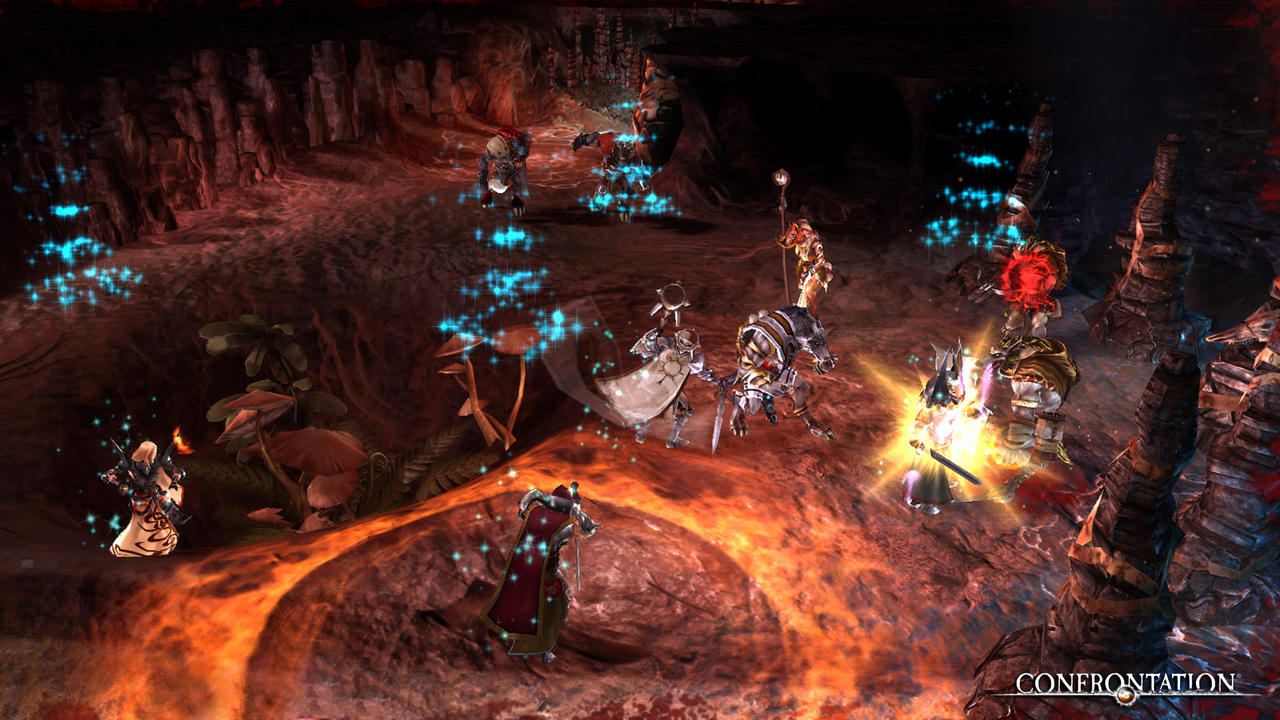 The game is set in the fantastic and original universe of Confrontation, Aarklash, and is an adaptation of a tabletop. As the Age of Rag’narok is approaching, you will take the lead of a group of elite Griffin warriors infiltrating enemy territory in order to bring an end to the Scorpion threat. During their journey, they will have to face numerous threats, such as the fearsome creatures of the Alchemists of Dirz, the brutal Orcs of Bran-O-Kor, or the ferocious Wolfen pack. The route will be full of danger before they reach their destination in the depths of the Scorpion’s lands.

As said, there is a nice upgrade system in Confrontation. Although we could not level up our characters enough to see its full potential, we can note a nice amount of skills and upgrades. Players can carry two weapons and to my surprise, there wasn’t any potion or item system available to use, especially when we were engaging in combat. Players can only heal (via the magic skill), revive or treat the wounds of their comrades. As with most RPGs, we were scavenging the areas for chests and although there were some, they only contained bandages. Not only that, but there weren’t any stamina or mana potions to use either. I don’t know if things open up at the later levels, but in the first two stages, everything seemed quite limited. 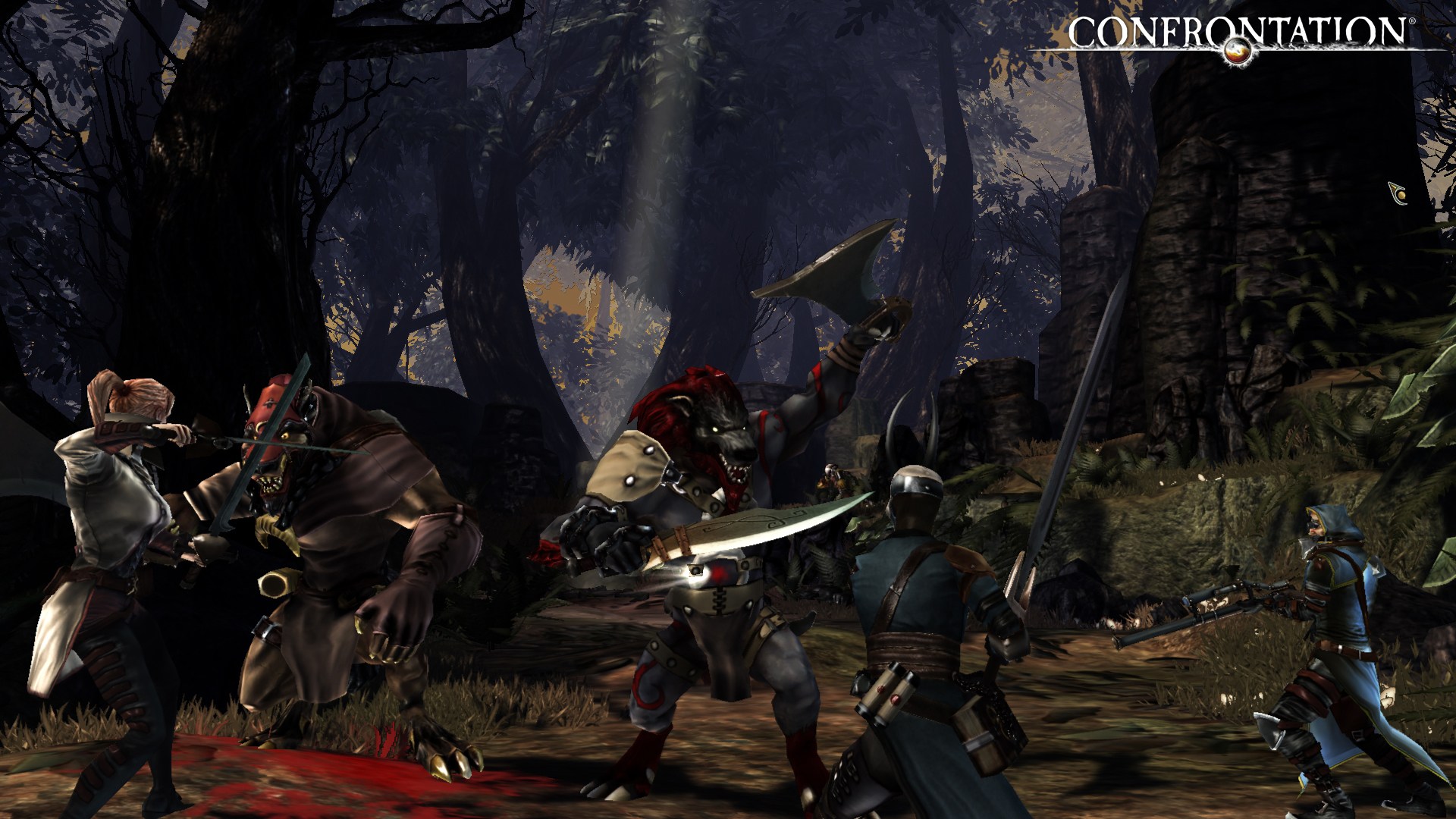 Graphics wise, the game is average at best. There isn’t currently any SLI profile and the game was stressing one of the cores of my GTX295. In fact, I could not maintain a constant 60fps with all the sliders maxed out, even though there was nothing on-screen to justify such requirements. There are a lot of low-resolution textures and some seriously ‘blocky’ characters (note: images accompanying the preview are from Cyanide and not from the version we’ve played). We can only hope that things will be better in the final version and that Cyanide cut some cosmetic features from this preview version.

On the other hand, the combat itself is satisfying and will be appreciated by all those slow-paced RPG/RTS fans. Confrontation is not a Diablo clone, and you’ll have to use your skills cleverly and tactically. Players will have to place their strong units in front of the weak ones, move around the mages and let them cast spells to their opponents, take advantage of the environment with their characters that can use long-range weapons, etc. And the game is a bit hard, even in normal difficulty. Thankfully, there is a pause key that will come in handy. All in all, the best feature of Confrontation seems to be its deep, slow-paced combat system. It’s not perfect, but it’s surely satisfying. 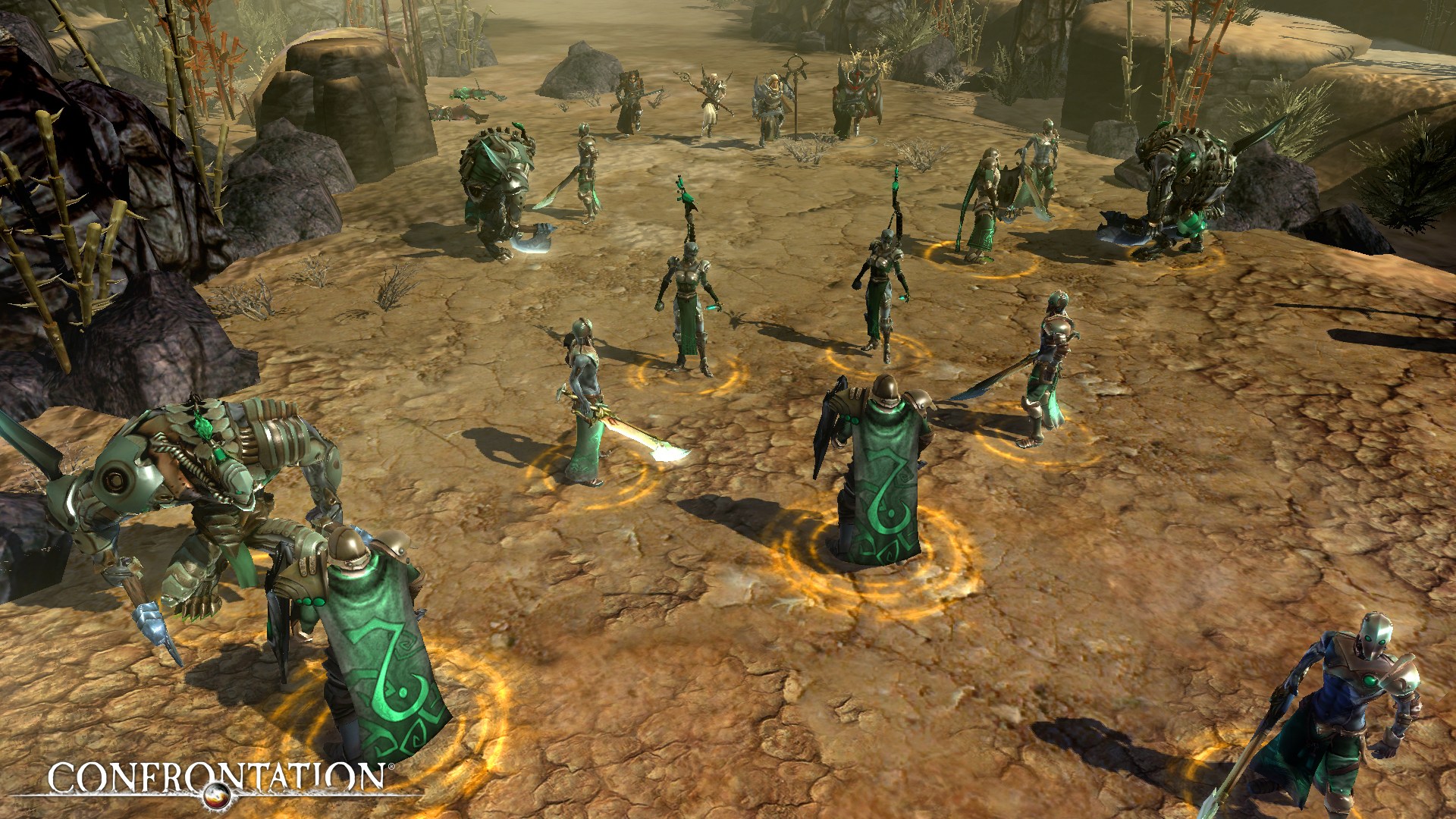 Of course, there are some minor issues with the combat due to the AI system. The AI needs a little more work. It’s passable, but enemies barely flanked us. The friendly AI is also a bit bugged and we had some issues with the control commands. There were occasions where our commands (after pausing the game and issuing them) were not registered, thus our characters didn’t do what we commanded them to. There was also a slight of lag between selecting a skill and seeing it happening. This might be due to the game’s slow pace nature, but we’d like to see some further improvements in that area too.

Confrontation looks promising; there is no doubt about that. And quite frankly, it has something that most triple-A games lack. Make no mistake, this title has a lot of potential, and we hope that Cyanide has already further tweaked and improved it. Let’s not forget that Cyanide is also working on Game of Thrones RPG and Of Orcs and Men, so it will be interesting to see whether Confrontation got their full attention or not.

Confrontation is currently slated for an April 5th release, exclusively on the PC and can be already pre-ordered from various digital distribution services.