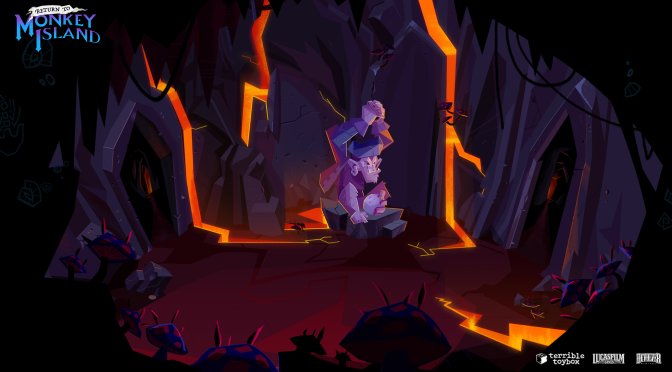 Devolver and Lucasfilm Games have revealed the first in-game screenshots for Return to Monkey Island. These screenshots will give you a glimpse at the game’s art style, so make sure to view them.

Return to Monkey Island will feature a more “modern-ish” art style. The game will start in the amusement park, and from there it takes lots of weird twists and turns.

Regarding the game’s gameplay mechanics, this is what Ron Gilbert told AdventureGamers.

“There is pointing and clicking. That is true. [laughs] Interface-wise, this one does other things, you know—[we’re] having fun and advancing things. It’s obviously not the seven- or nine-verb interface from Thimbleweed or back in the day. We did a lot of playing around when Delores came out, with interface and stuff, and we just kept looking and evolving. An important part of this, in some ways, is keeping and evolving the genre. Not letting it get static, saying, “Well, that’s what we did thirty years ago, so that’s exactly how we’re going to do it these days.” In some ways, that was Thimbleweed Park. So this game, we really have looked at things we can do that are going to be different and better and more streamlined, and Dave and I spent a lot of time looking at the interface going, “What is important to people? What are people trying to do?” I don’t want to say exactly what we did yet, but it is definitely a really fun evolution of the interface.”