WRC 9 is the latest part of KT Racing’s official WRC rally racing series that will release in a few days. Powered by the KT Engine, it’s time now to benchmark it and see how it performs on the PC platform. 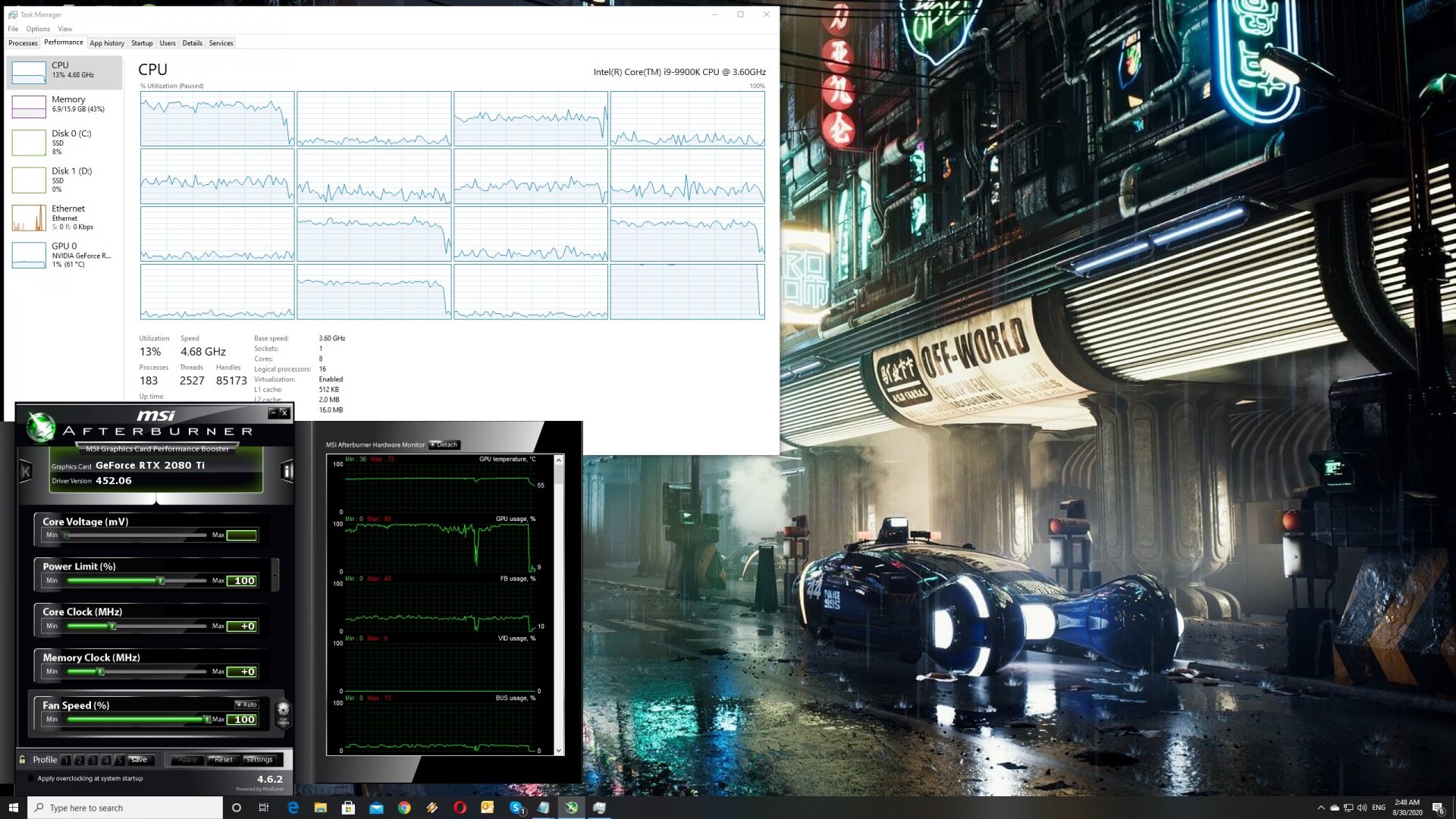 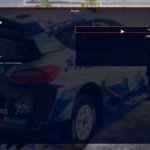 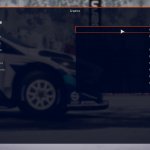 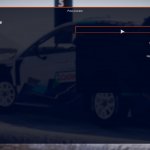 WRC 9 does not come with a built-in benchmark. As such, we’ve decided to benchmark the first New Zealand stage. That stage has a lot of vegetation, and was among of the most demanding stages. As we’ve stated multiple times, we prefer benchmarking demanding areas/stages in games.

In order to find out how the game scales on multiple CPU threads, we simulated a dual-core, a quad-core and a hexa-core CPU. WRC 9 uses DX12 and requires at least four CPU threads. While our simulated dual-core system was able to push a constant 60fps experience at 1080p/Max settings, it suffered from awful framepacing issues. Similarly, our quad-core system was able to push a minimum of 95fps but had noticeable framepacing issues. That’s because all of our four CPU threads were used to their fullest. In order to eliminate the framepacing issues, we had to lock our framerate to 60fps. By doing that, we were able to reduce the CPU load, and get a silky smooth gaming experience on our quad-core system. That’s obviously with Hyper Threading disabled. When we enabled Hyper Threading, we were able to get a silky smooth experience, with framerates higher than 120fps. 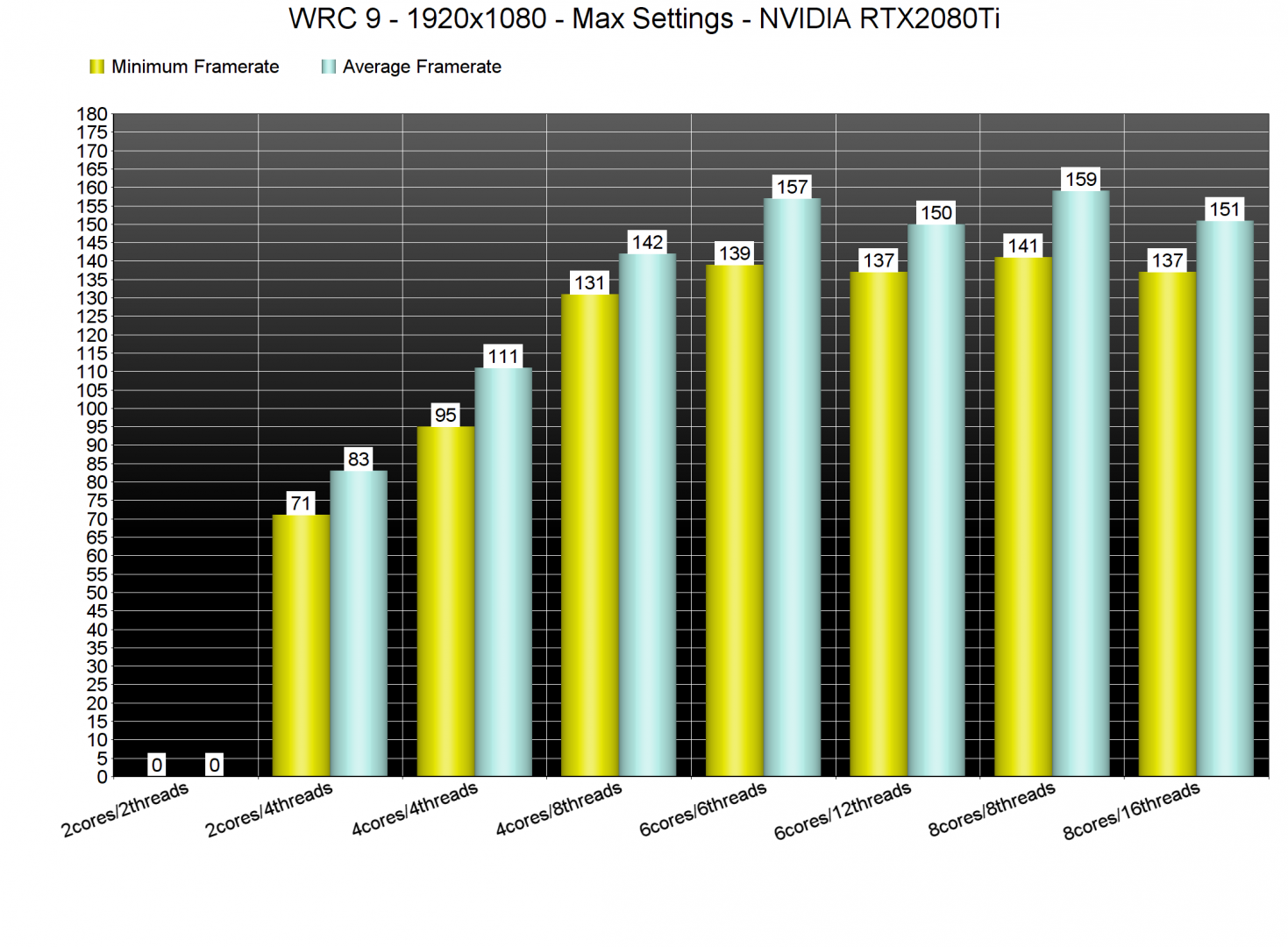 WRC 9 was also able to run smoothly on our Intel i7 4930K system. Even though that particular CPU was bottlenecking our RTX2080Ti, we were able to get a constant 90fps experience at both 1080p and 1440p. As always, in 4K we were limited by GPU and not by our CPU. 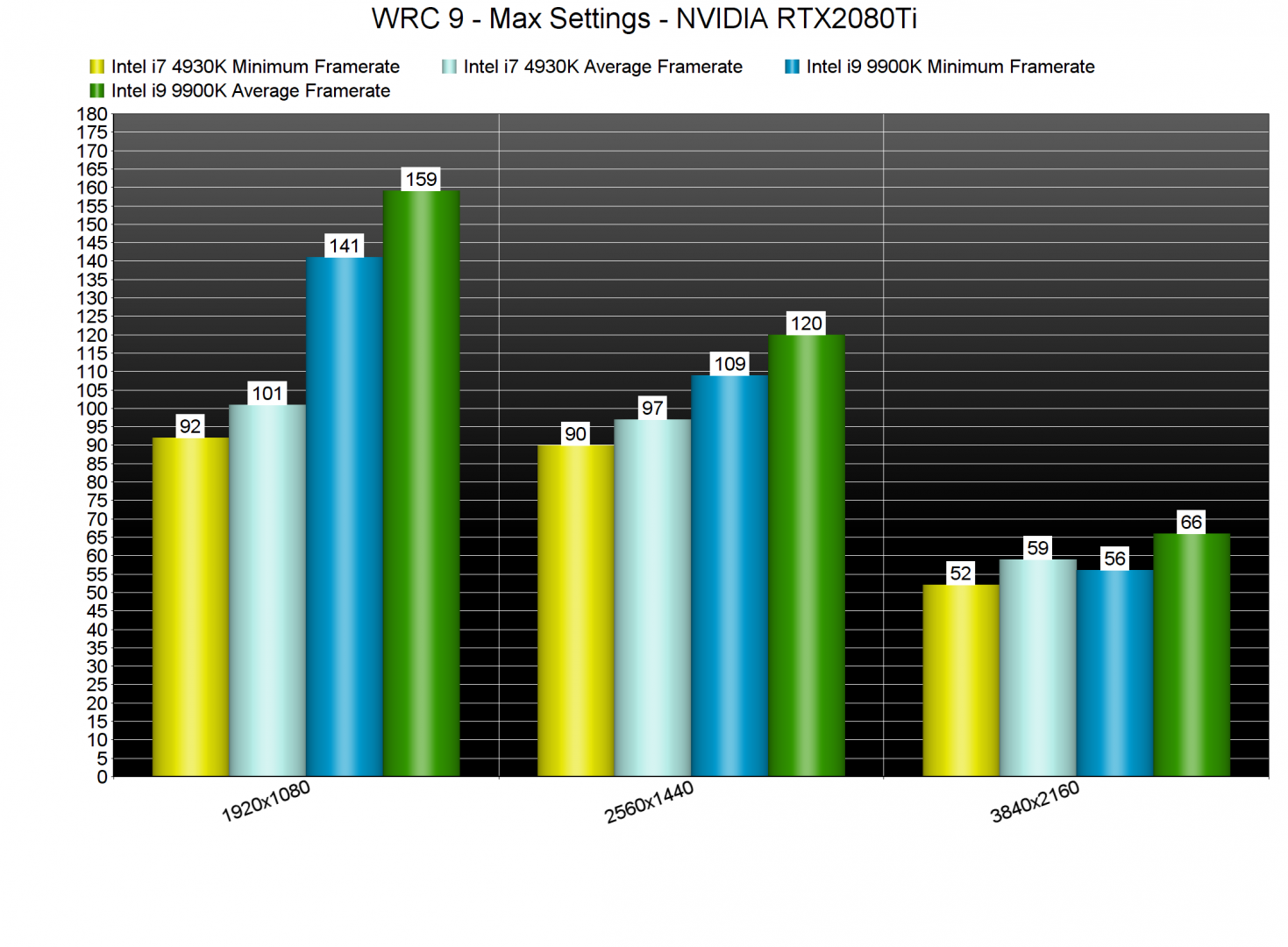 Thankfully, and contrary to Project CARS 3, WRC 9 can run smoothly on a variety of graphics cards. At 1080p/Max settings, our top three most powerful GPUs were able to provide a constant 60fps experience. Our AMD Radeon RX580 came close to it with a minimum of 54fps and an average of 59fps. 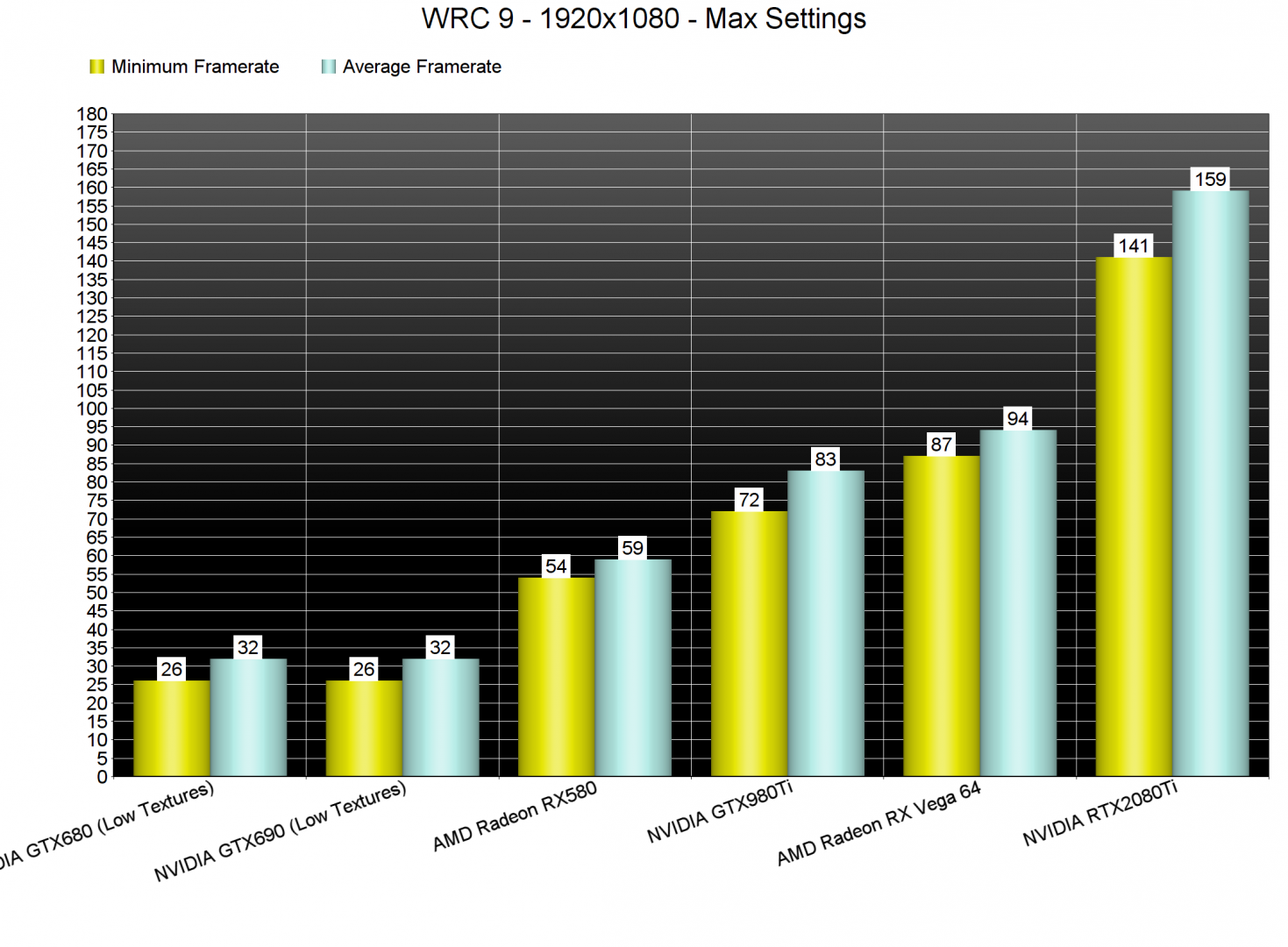 At 1440p, our AMD Radeon RX Vega 64 provided an almost 60fps experience. As for 4K, our NVIDIA RTX2080Ti saw some drops to the mid-50s. Thankfully, these drops were on rare occasions, and those with overclocked models will not notice them. Still, we’d suggest playing this rally game at 3328×1872 on the RTX2080Ti (so you can have a minimum of 65fps). 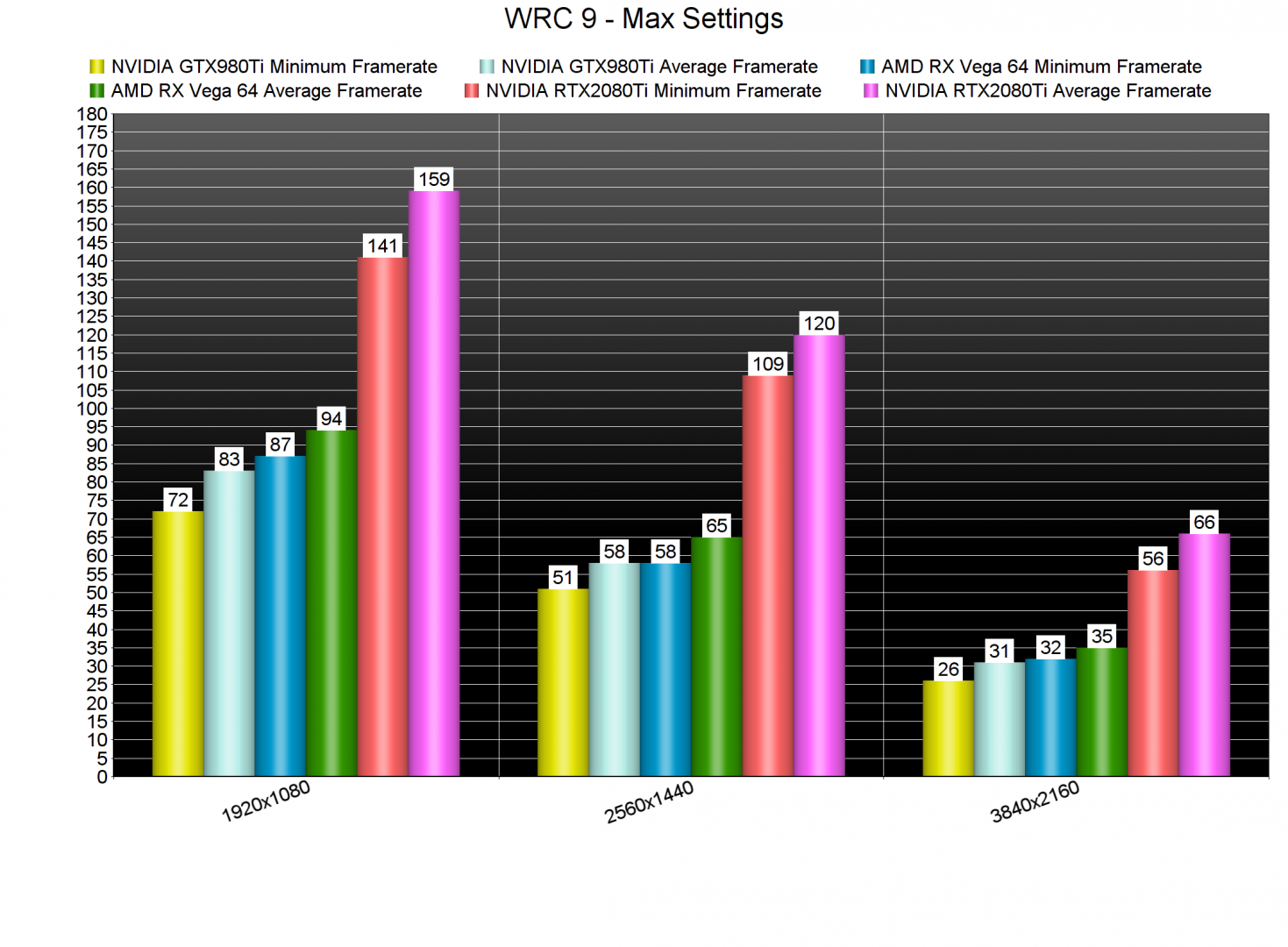 Graphics-wise, WRC 9 looks better than its predecessor. KT Racing has improved the game’s lighting system, and the car damage system is absolutely fantastic. Your car can also bend small bushes, and destroy a number of fences. Most of the textures are also of high-resolution, though you will notice some blocky 3D spectators. Moreover, shadows cascade is low and you will notice some shadow pop-ins while driving. Additionally, there are noticeable pop-ins of objects and vegetation. Thankfully, they are not as awful as those in Project CARS 3. Still, it’s a bit disappointing witnessing such pop-in issues when using the Very High settings.

In conclusion, WRC 9 runs great on the PC, though we’d like to see some higher values for LOD and Shadow Cascades. We seriously don’t know why most of the latest games have these visual issues. My guess is that these are “leftovers” from the console versions, which is kind of disappointing. Still, the game can run on a wide range of PC configurations, is pleasing to the eye, comes with an amazing car damage system, and has a number of options to further improve performance.