A lot has been said these days about the rocky launch of Red Dead Redemption 2 on the PC. The game initially suffered from major crash issues that Rockstar was able to fix a couple of days ago. However, and after applying its latest update, we have not experienced any stability issues on our PC systems. Therefore, it’s time to benchmark the game and see how it performs on the PC platform. 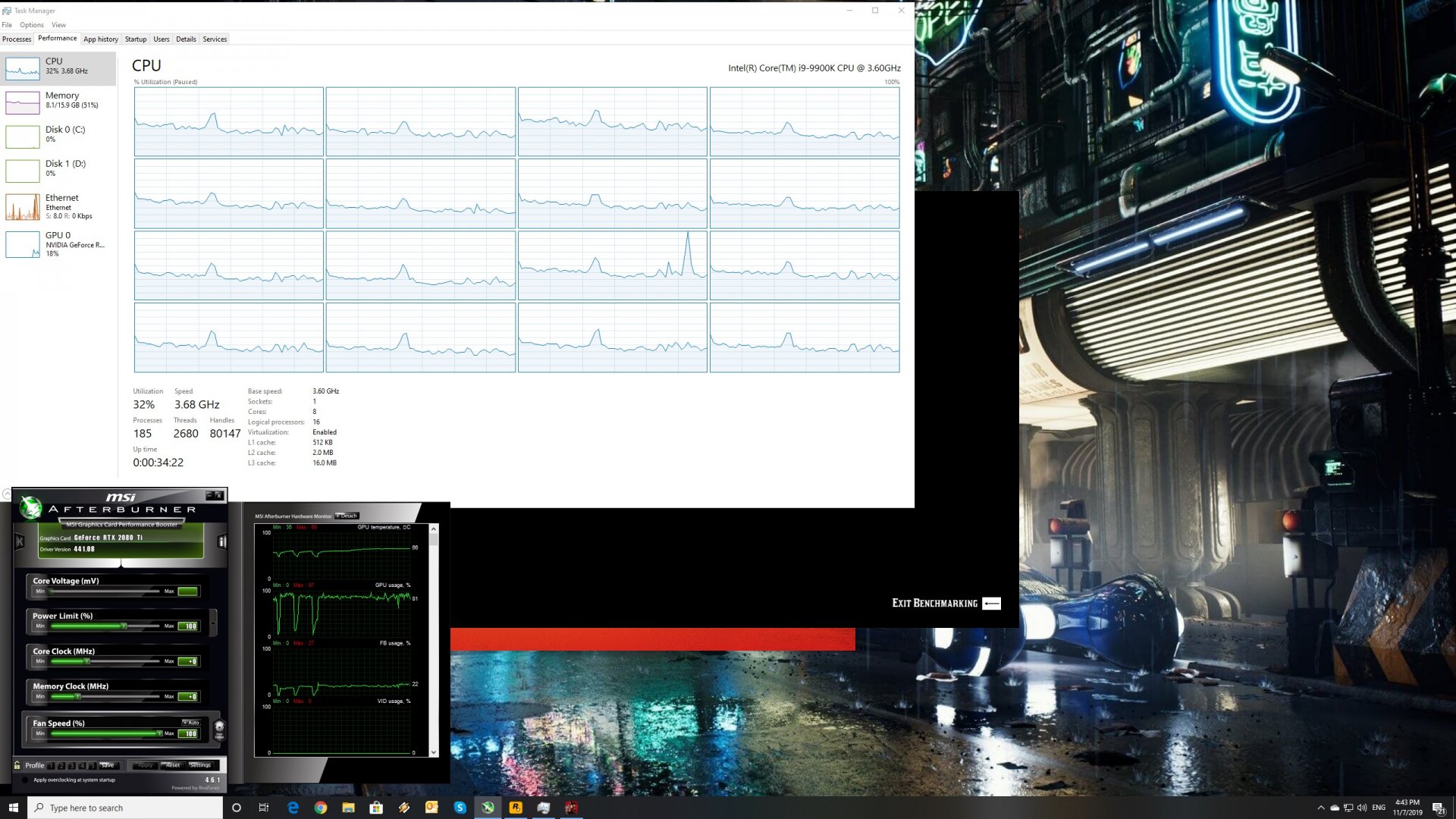 Rockstar has included over 40 graphics settings to tweak. PC gamers can adjust the quality of textures, terrain, lighting, shadows and more. Unfortunately, the game does not come with any FOV slider, however, PC gamers can use this tool in order to adjust it.

Red Dead Redemption 2 features a built-in benchmark tool that perfectly represents its in-game performance. We’ve also lowered our resolution to 1024×768 for our CPU tests (so we could avoid any major GPU-bottleneck). Unfortunately, though, we were still GPU-limited on our Intel i9 9900K system. The game also supports both DirectX 12 and Vulkan. Since the performance difference was really small between these two APIs on both of our AMD and NVIDIA GPUs, we’ve decided to use DX12. The main reason behind this decision was the frame pacing/stuttering issues from which the Vulkan API currently suffers from.

In order to find out how the game scales on multiple CPU threads, we simulated a dual-core, a quad-core and a hexa-core CPU. Red Dead Redemption 2 does not require a high-end CPU. Even without Hyper Threading, our simulated dual-core was able to provide a better gaming experience than Xbox One X or PS4 Pro. The game appears to be using more than four CPU threads, though it did not stress our i9 9900K. 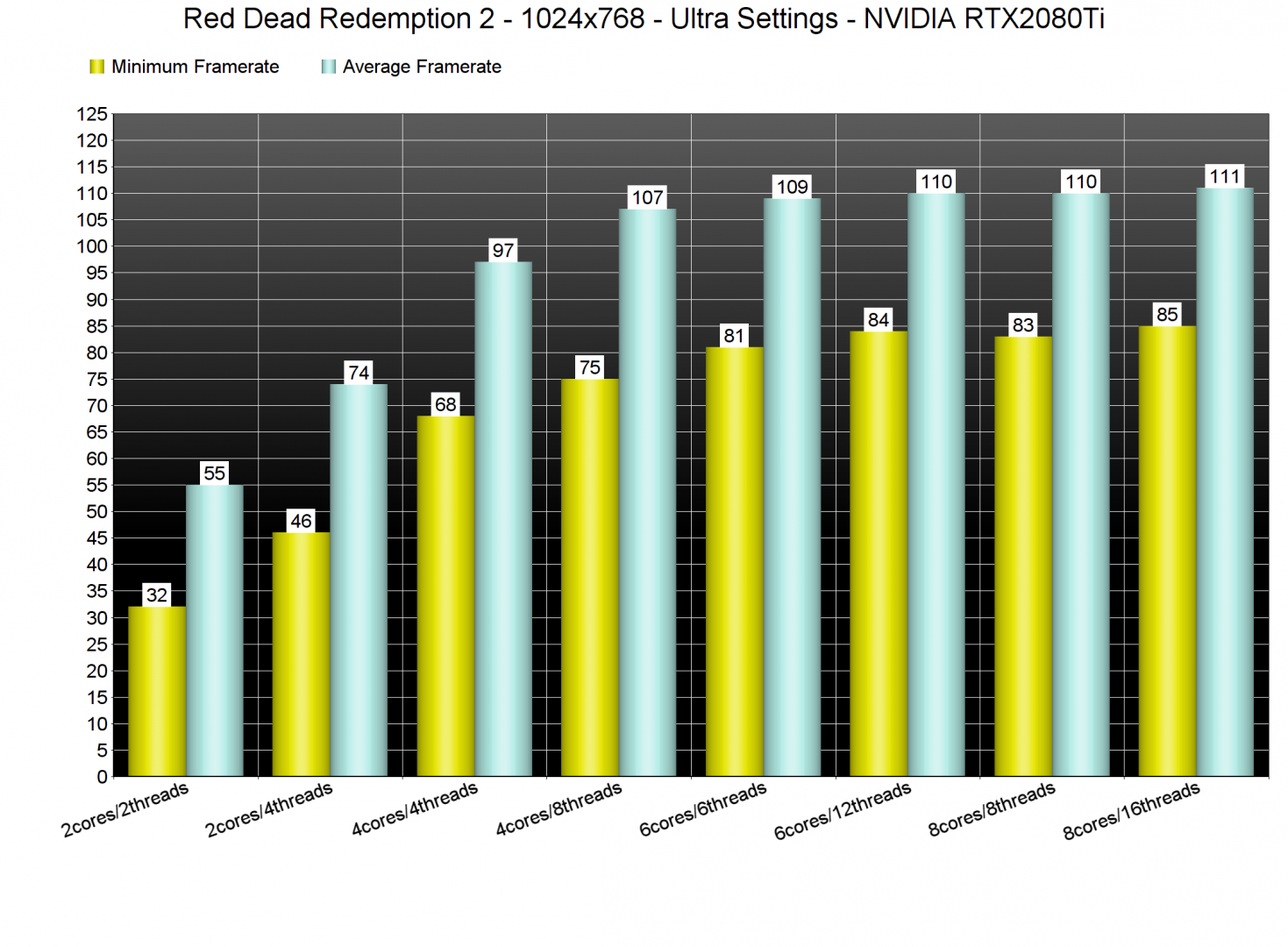 What’s also really cool witnessing here is its performance on the Intel i7 4930K. Due to DX12, this old CPU can offer a silky smooth gaming experience in this modern-day title. This right here is the reason why developers should be using low-level APIs like DX12 and Vulkan. As we can see, there is a small performance difference at 1080p. However, at 1440p and 4K the performance is similar to the Intel i9 9900K. 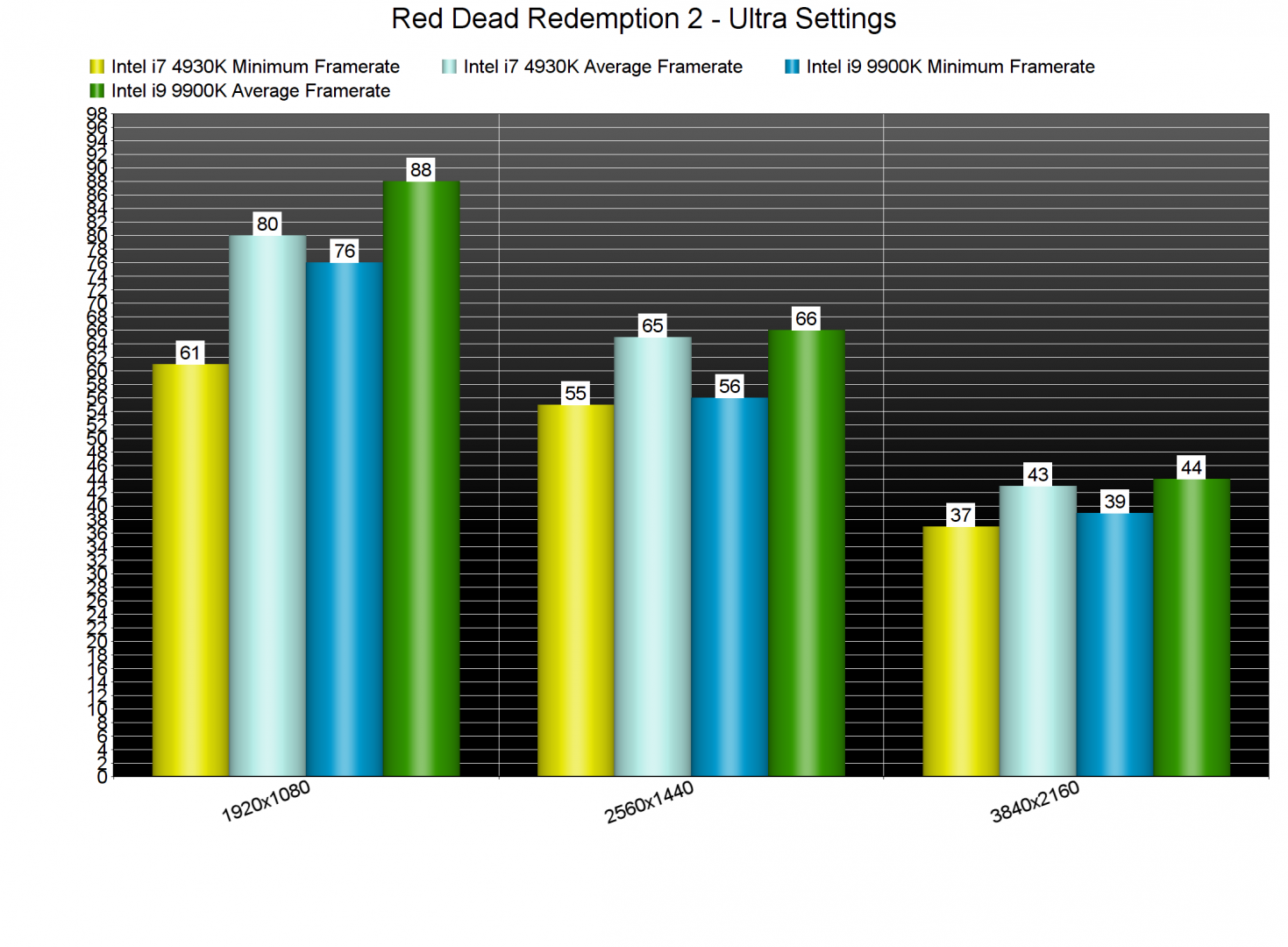 Contrary to the CPU requirements, the game’s GPU requirements are quite high. In fact, RDR2 is the most GPU demanding game we’ve seen so far on the PC. At 1080p and on Ultra settings, the only GPU that was able to offer a constant 60fps experience was the RTX2080Ti. 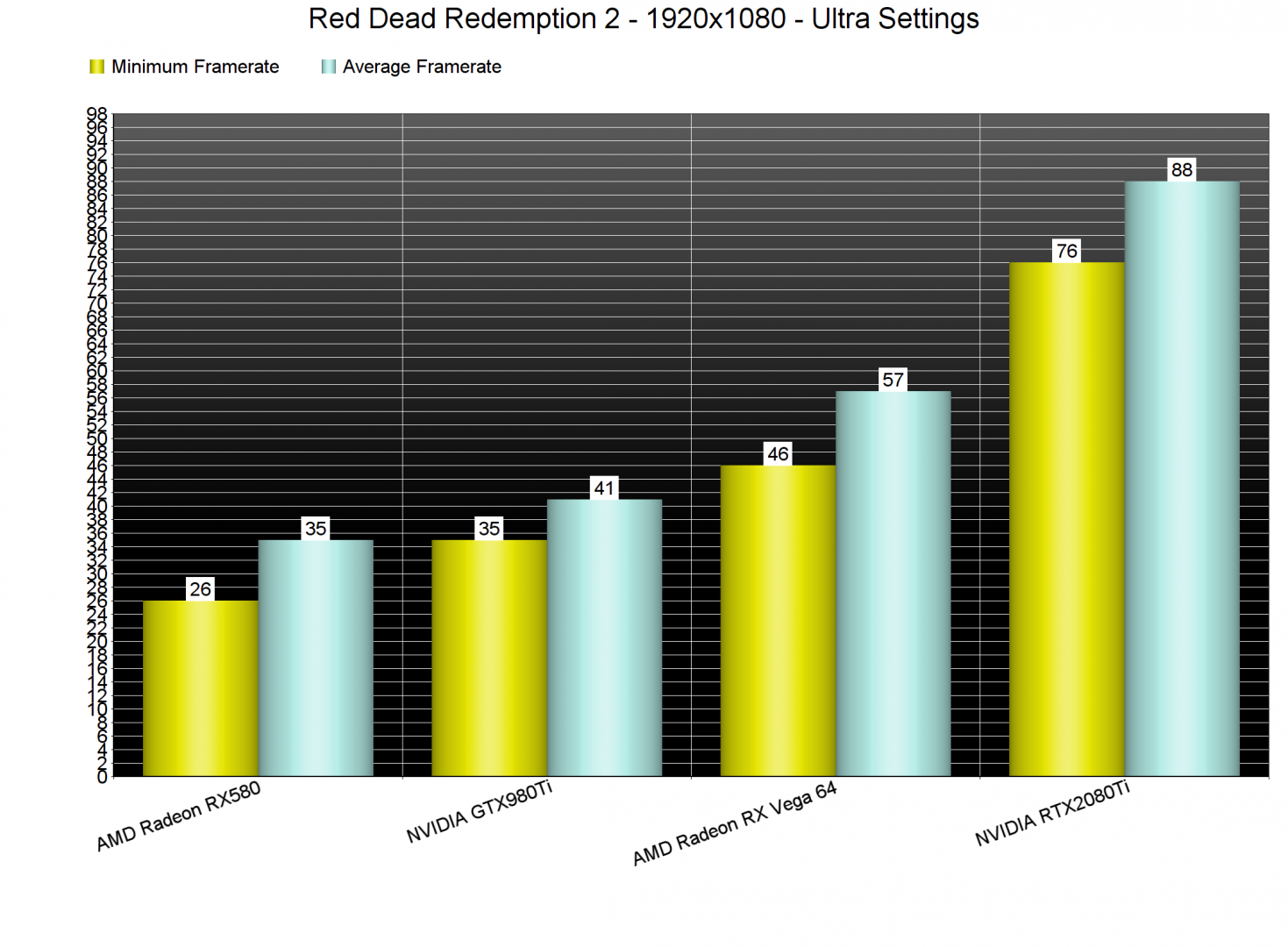 At 1440p, the RTX2080Ti was able to offer a smooth gaming experience. There were some drops below 60fps, however the minimum framerate was 56fps. As for 4K, NVIDIA’s most powerful GPU was able to push a minimum of 39fps and an average of 44fps.

As said, Red Dead Redemption 2 comes with a lot of graphics settings to tweak. Thankfully, you can lower some settings in order to hit 60fps at both 1080p or 1440p on less powerful GPUs. For instance, our Vega 64 almost offered a 60fps experience on High settings at 1080p. Not only that, but the Medium settings are equal to the High settings of other titles. This is something that you’ll have to keep in mind while playing the game, as the console versions are mostly using Medium and Low settings. 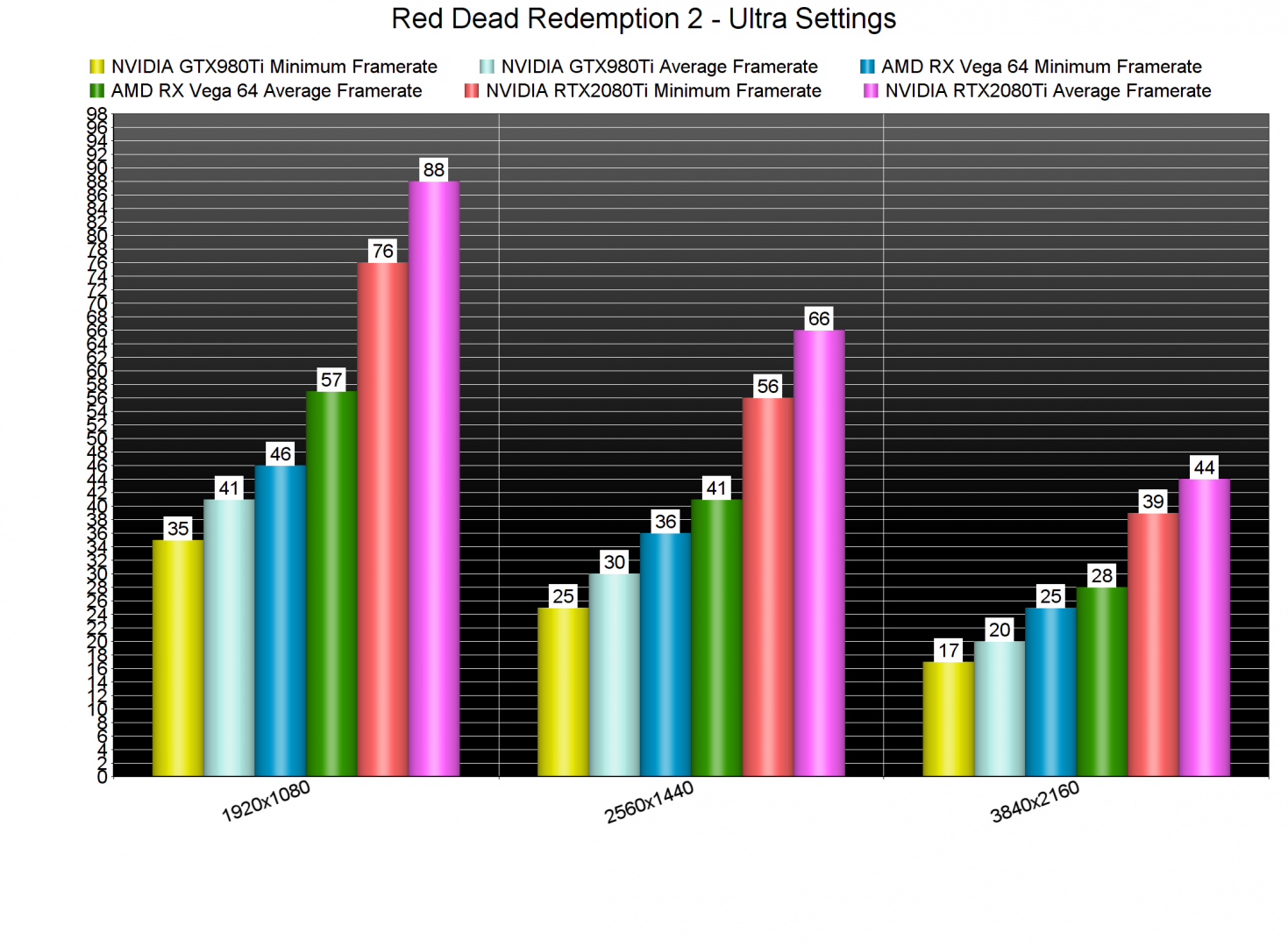 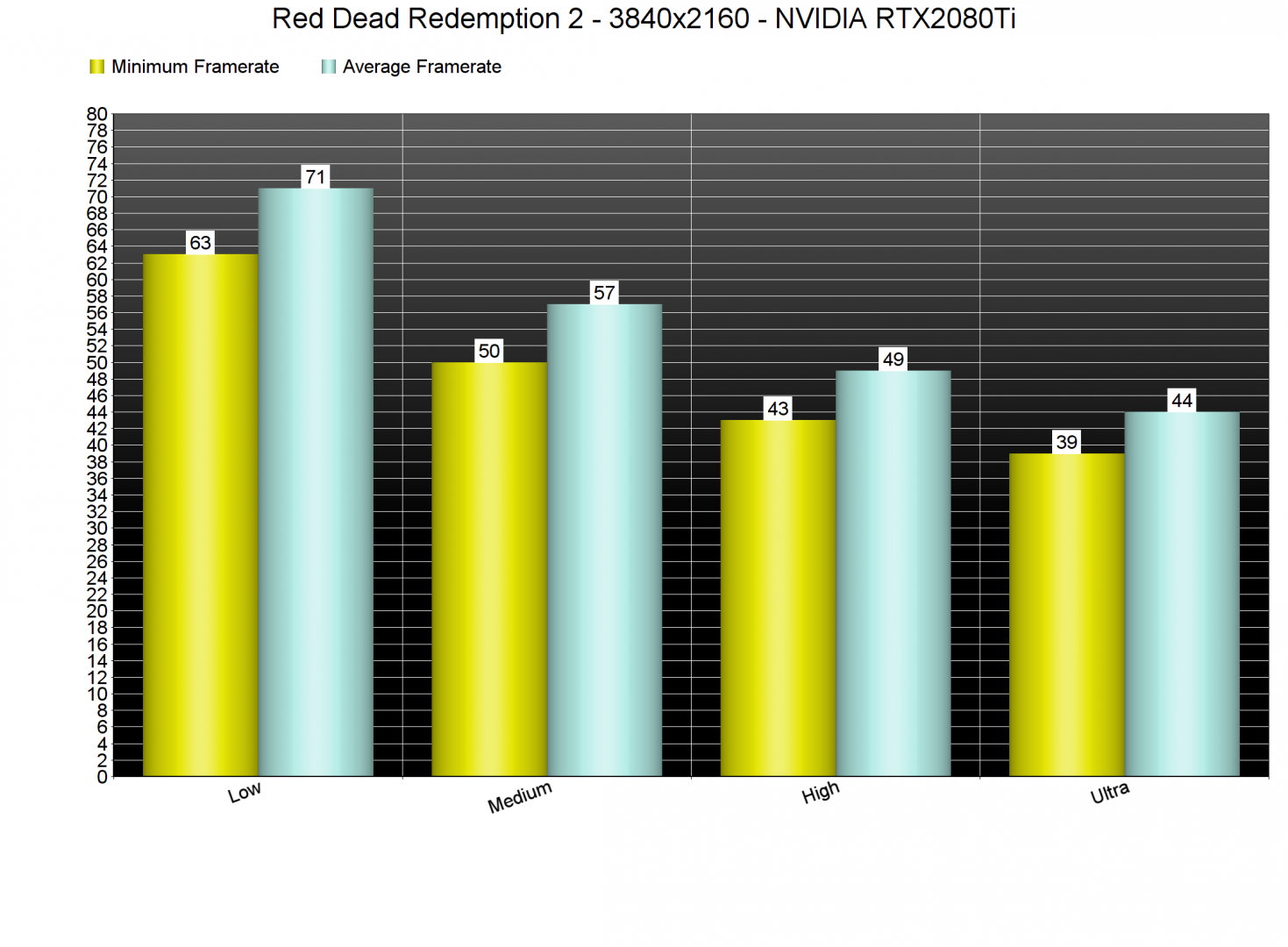 Graphics wise, Red Dead Redemption 2 looks absolutely gorgeous. Yes, this is a really demanding title, however, we feel that the game does justify its high GPU requirements. The draw distance is great, the character models are amazing and the environmental/weather effects are stunning. The light sources can even affect the snowflakes, and there are some beautiful snow deformation effects. So yeah, Red Dead Redemption 2 is currently the most beautiful open-world game on the PC.

In conclusion, RDR2 does not require a high-end CPU, mainly thanks to its low-level APIs. On the other hand, the game does require a powerful GPU. Thankfully, though, PC gamers can improve performance by adjusting the game’s extensive graphics settings. You should also keep in mind that RDR2 can still look great on Medium settings (with Ultra textures obviously). I know that some PC gamers do not want to run a game on Medium settings, however RDR2’s Medium settings are equal to the High settings of most other triple-A titles. We also did not experience any mouse acceleration or smoothing issues. Moreover, we did not encounter any stuttering issues or crashes in DX12.

Red Dead Redemption 2 is not perfect though. We believe that the game could benefit from some additional optimization enhancements. Moreover, we were expecting a higher performance difference between Low and Ultra settings. Yes, there are 40 graphics settings, however the game’s performance on Low settings is nowhere close to what we were expecting. For instance, Ghost Recon Breakpoint looks and runs better in 4K/Very High than RDR2 does in 4K/Low.