Yesterday, Rockstar released the highly anticipated DLSS Patch for Red Dead Redemption 2. As such, we’ve decided to benchmark it and see whether its implementation is as good as the one for Doom Eternal and LEGO Builder’s Journey.

As the title suggests, Red Dead Redemption 2 is using the latest version of DLSS, Version 2.2.10.0. As such, the game does not suffer from any ghosting or blur issues.

Unfortunately, DLSS in Red Dead Redemption 2 brings a lot of aliasing. On Ultra settings and at both 1080p and 1440p, the image quality suffers from noticeable aliasing issues. Hell, there were aliasing issues even at 4K with DLSS Quality. These “jaggies” can be easily noticed on distant objects, especially during the benchmark scenes.

Now we wouldn’t really mind those jaggies if there were significant performance improvements. Unfortunately, though, we are only looking at a 10-14fps performance boost.

At 1080p, our average framerate increased by 12fps and at 1440p, we saw a performance increase of 9fps. And as for 4K, DLSS Quality provided an 11fps boost. In other words, DLSS Quality Mode improves performance by around 15-20%, which is nowhere close to what we’ve seen in other games. 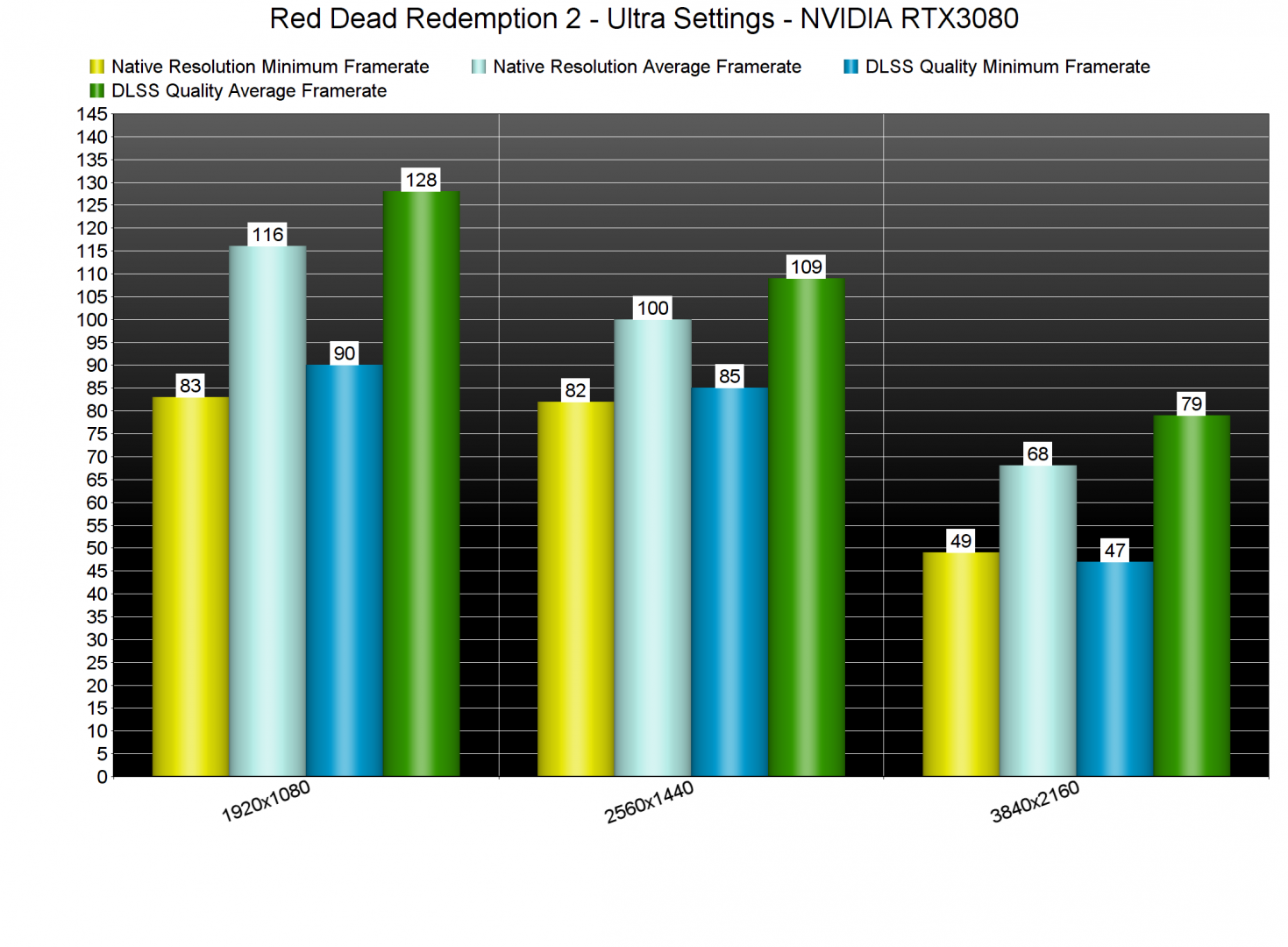 We’ve also tested DLSS (and native 4K) in both DX12 and Vulkan. Vulkan appeared to be running faster on our RTX3080 at both native 4K and DLSS-upscaled. However, there were two annoying stutters at the end of the benchmark (which explains the lower minimum framerate). Surprisingly enough, these stutters were absent from DX12. Still, DX12 had some frame pacing issues in the big city. Thus, we suggest using the Vulkan API. 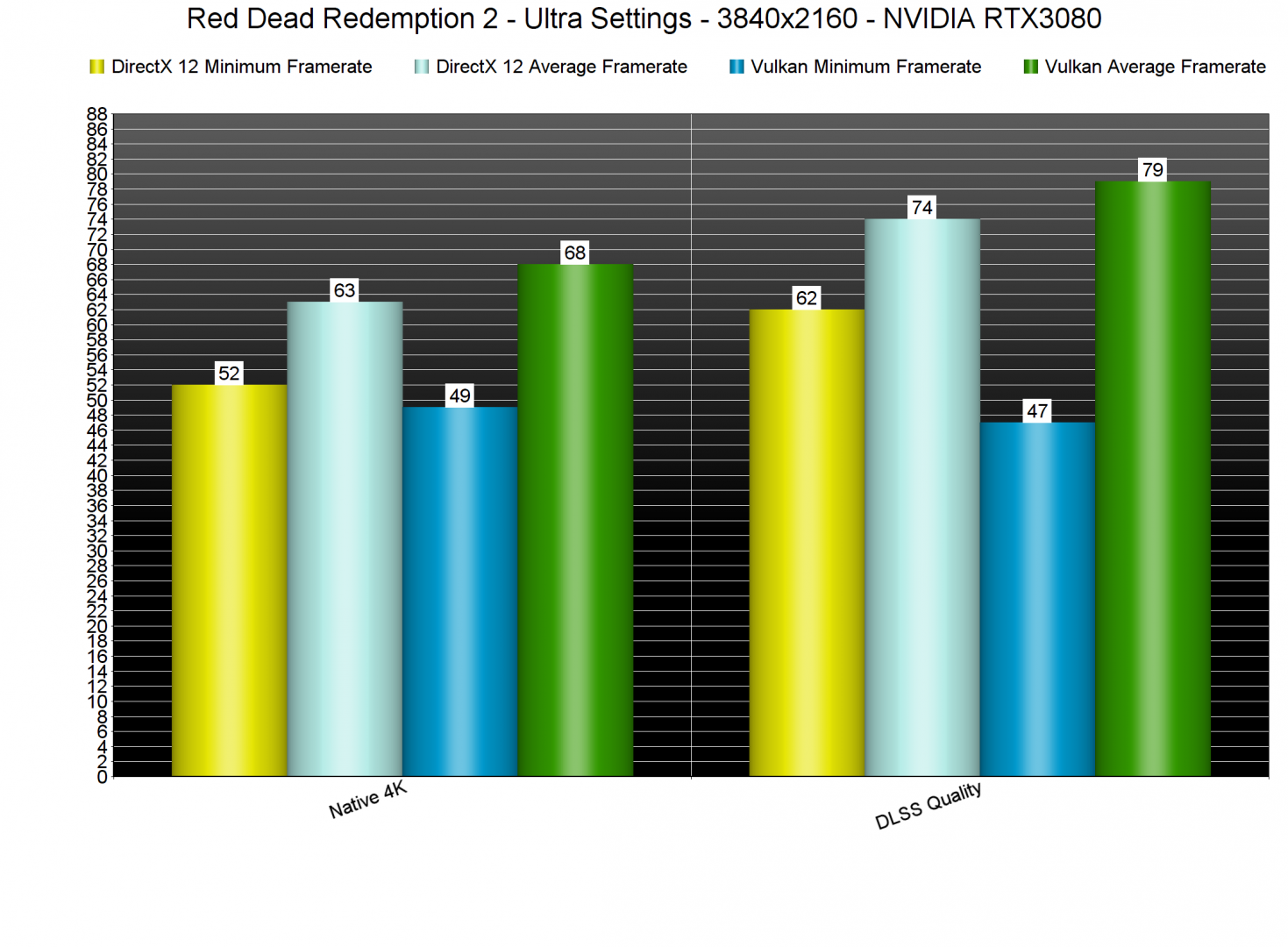 But what about image quality? Below you can find some comparison screenshots between native 4K (left) and DLSS Quality (right). As you can see, DLSS Quality looks sharper, though it does suffer from the aforementioned aliasing issues (pay close attention to the cashier’s hair for instance). I suggest opening the images in new tabs.

Now contrary to other games, Red Dead Redemption 2 offers a TAA Sharpening setting. As such, and by adjusting the setting, we can get a sharper image with TAA (than with DLSS Quality). Not only that, but the TAA image does not suffer from the aliasing issues that are present in DLSS Quality Mode. Here is a comparison between TAA Sharpened and DLSS Quality. As we can see, TAA Sharpened looks better in every way.

All in all, we are really disappointed by the DLSS implementation in Red Dead Redemption 2. Contrary to other games, DLSS does not bring a big performance boost in Red Dead Redemption 2. And even though it uses the latest 2.2.10.0 version, it brings a lot of aliasing at both 1080p and 1440p. Therefore, we strongly recommend avoiding it at these low resolutions. As for 4K, we can only recommend DLSS Quality (and certainly not the other modes) to those that have performance issues but do not want to lower their in-game settings. However, and if you can hit 60fps at all times, you should simply avoid using DLSS!