Asobo has implemented a wide range of PC graphics settings to tweak. PC gamers can adjust the quality of Terrain, Buildings, Trees, Shadows, Water, and more. The game only supports DX11 and does not support Exclusive Fullscreen Mode. This may annoy some G-Sync owners as they won’t be able to take advantage of their monitors (unless they enable G-Sync for windowed applications, which is still a buggy mess). Furthermore, we noticed some rendering issues when using a different resolution than our native one. Take for example this 4K screenshot. As you can see, while the game is rendered in 4K, there is A LOT of aliasing. We don’t know whether this is related to the lack of an exclusive fullscreen mode. 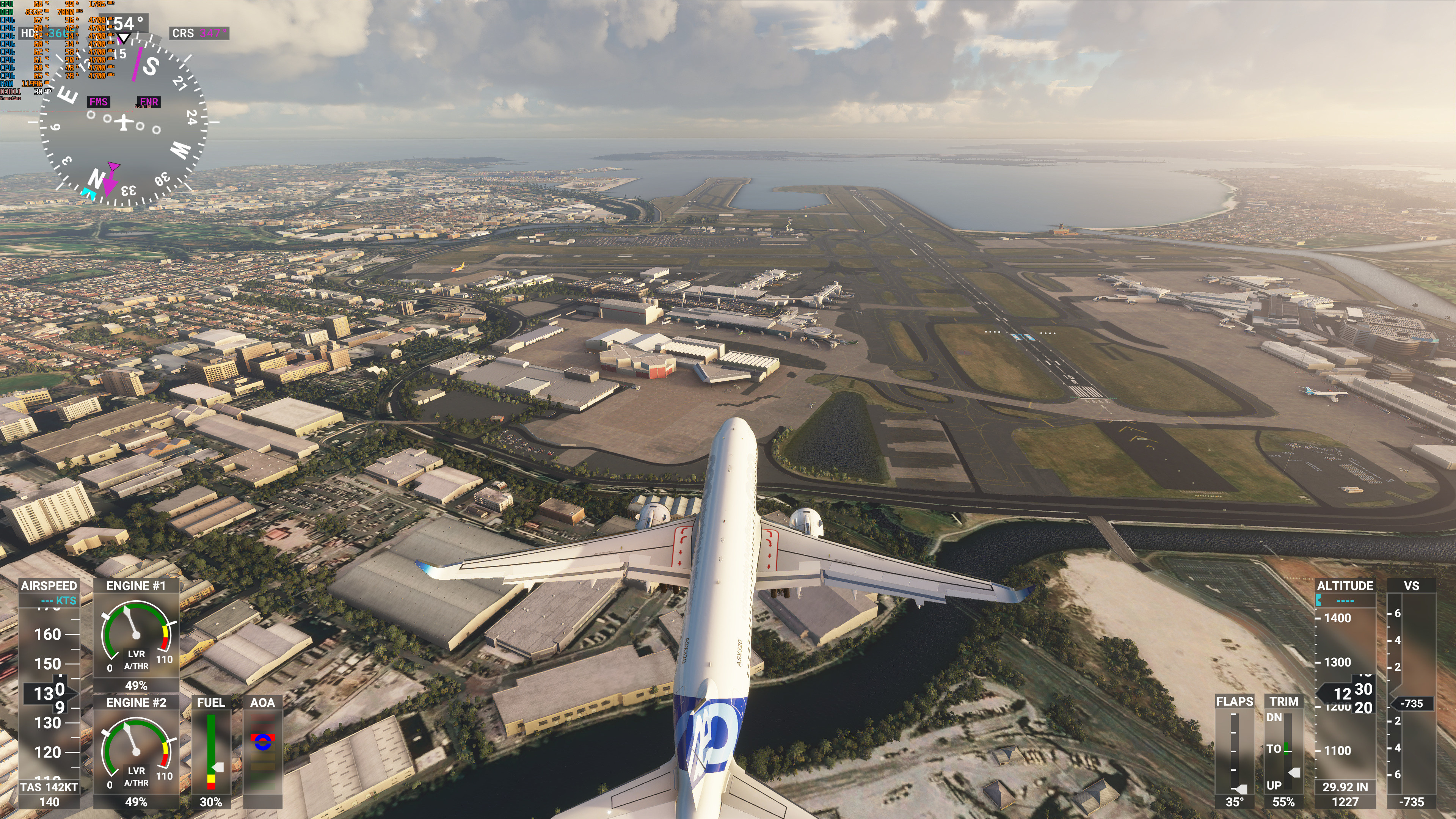 The game also appears to have some optimization issues when using the cockpit view. As you can see below, both our CPU and GPU were not used to their fullest, resulting in low performance. Since the game is only using DX11, my guess is that this is a driver overhead issue. We’ve seen the exact same thing happening in Doom 2016 (and other games) when not using a low-level API. So, hopefully, this will be resolved once Asobo adds support for the DX12 API.

As we’ve already stated, Microsoft Flight Simulator is the new “Crysis”. What this basically means is that there is no current-gen CPU that can run the game with 60fps on Ultra settings. In fact, our Intel i7 9900K had major performance issues even on High-end settings in our CPU benchmark. However, do note that this is the worst-case scenario. Overall performance was way better in all other airports, including those in big cities. We don’t know why the game’s performance tanks at the JFK airport. Ironically, and similarly to Crysis, Microsoft Flight Simulator mainly relies on one single CPU core/thread. The game cannot scale well on multiple CPU cores, something that will negatively affect a lot of PC systems. Asobo plans to introduce support for the DX12 API at a later date, so let’s hope that the team will be able to improve the game’s multi-threading capabilities. To be honest, this situation reminded me of Forza Horizon 3. So, let’s hope that Asobo will follow Turn10’s steps and enhance the game’s performance.

Microsoft Flight Simulator requires both high-end CPUs and GPUs. In our GPU benchmark test, our NVIDIA RTX2080Ti was unable to offer a constant 60fps experience at 1080p/Ultra. Thankfully, the game could run smoothly when we lowered our settings to High-end. And, to be honest, we recommend using High-end on current-gen hardware. That is of course until we get new CPUs and GPUs (do note that Ultra settings also bring an additional CPU hit). At 1080p/High-end settings, the only GPU that was able to offer a smooth gaming experience was the RTX2080Ti. Both the AMD Radeon RX Vega 64 and GTX980Ti were able to offer a constant 40fps experience. And while some may say that 30-40fps are fine for Microsoft Flight Simulator, once you experience it with 60fps you won’t be able to go back. Not only that, but lower framerates can introduce input lag. For instance, we were unable to comfortably fly a plane (with the keyboard) at 30fps. However, we were able to even make some flying tricks (again with the keyboard) when the game was running with 60fps. At 2560×1440, our RTX2080Ti was able to push a smooth gaming experience on High-end settings. There were some drops to 56fps, however, the game felt smooth. On the other hand, our GTX980Ti and AMD RX Vega 64 were able to offer a 30fps experience. And as for 4K, there is currently no GPU that can run the game smoothly at both High-end and Ultra settings. Now while Microsoft Flight Simulator requires high-end GPUs, it looks absolutely stunning. The game packs truly next-gen graphics, and we believe that it fully justifies its high GPU requirements. Everything, from the planes to the volumetric clouds and the amazing weather effects, is exceptional in this game. The game looks fantastic even on High-end settings. The following screenshots, for instance, were captured at 1440p/High-end.

In conclusion, Microsoft Flight Simulator is one of the best looking games to date. It’s also one of the most demanding PC games we’ve ever tested. Before purchasing it, we strongly suggest taking a look at its official PC requirements. And while the game justifies its GPU requirements, it, unfortunately, has major CPU optimization issues. In its current state, the game cannot take full advantage of more than 6 CPU cores/threads, and relies heavily on one single core. So, let’s hope that Asobo will further optimize the game via post-launch patches.