Just Cause 4 came out last week and since it suffered from various optimization issues, we’ve decided to slightly delay our PC Performance Analysis until Avalanche releases the first PC patch for it. That first patch came out yesterday so it’s time now to benchmark this new open-world action game and see how it performs on the PC platform. 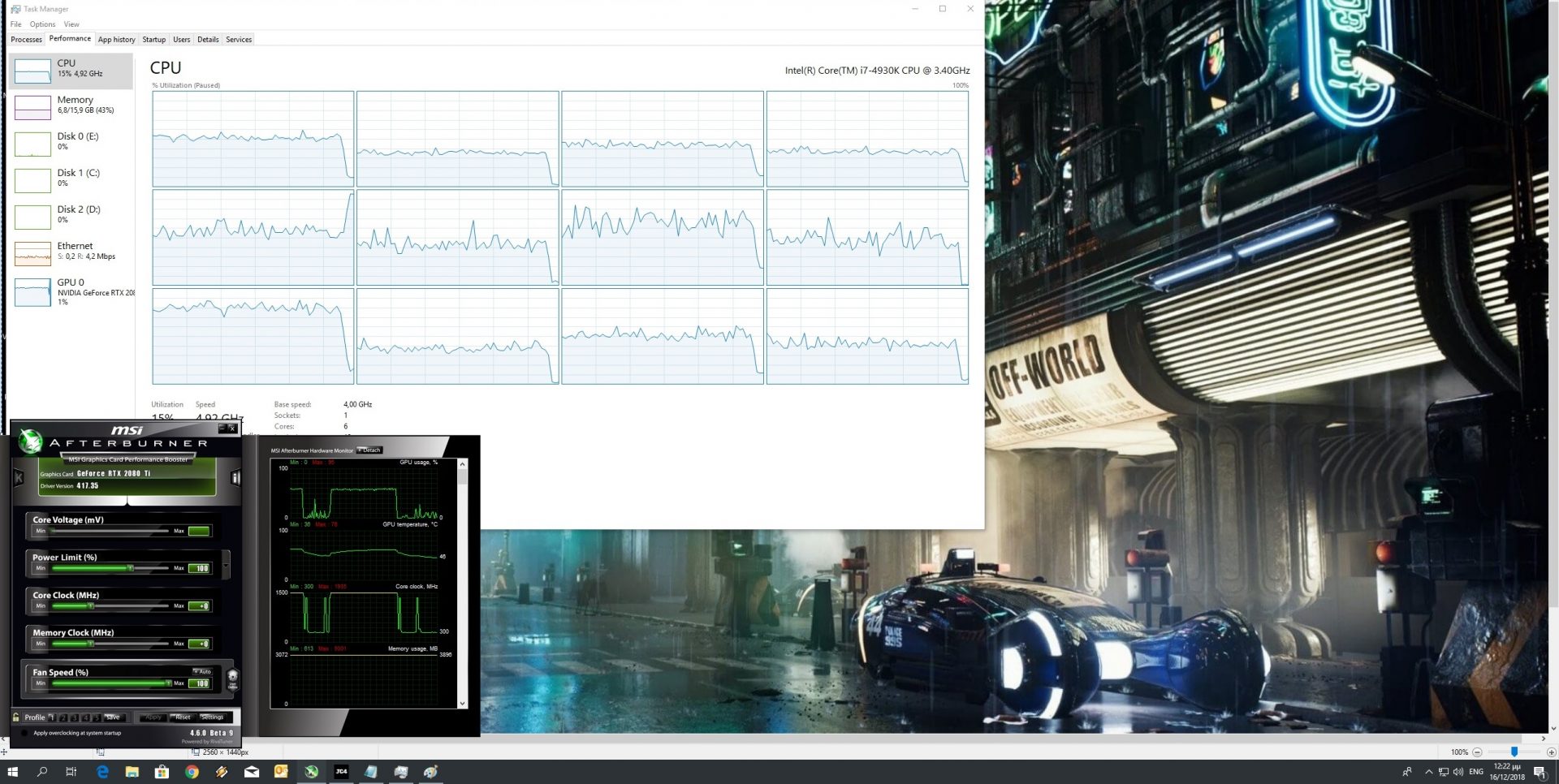 Just Cause 4 is powered by the APEX Engine and Avalanche Studios claimed that it has optimized its engine for modern-day platforms. In order to find out how the game scales on multiple CPUs, we’ve simulated a dual-core and a quad-core system. For our CPU tests we’ve benchmarked the following scene which featured numerous NPCs and destructible objects on screen. 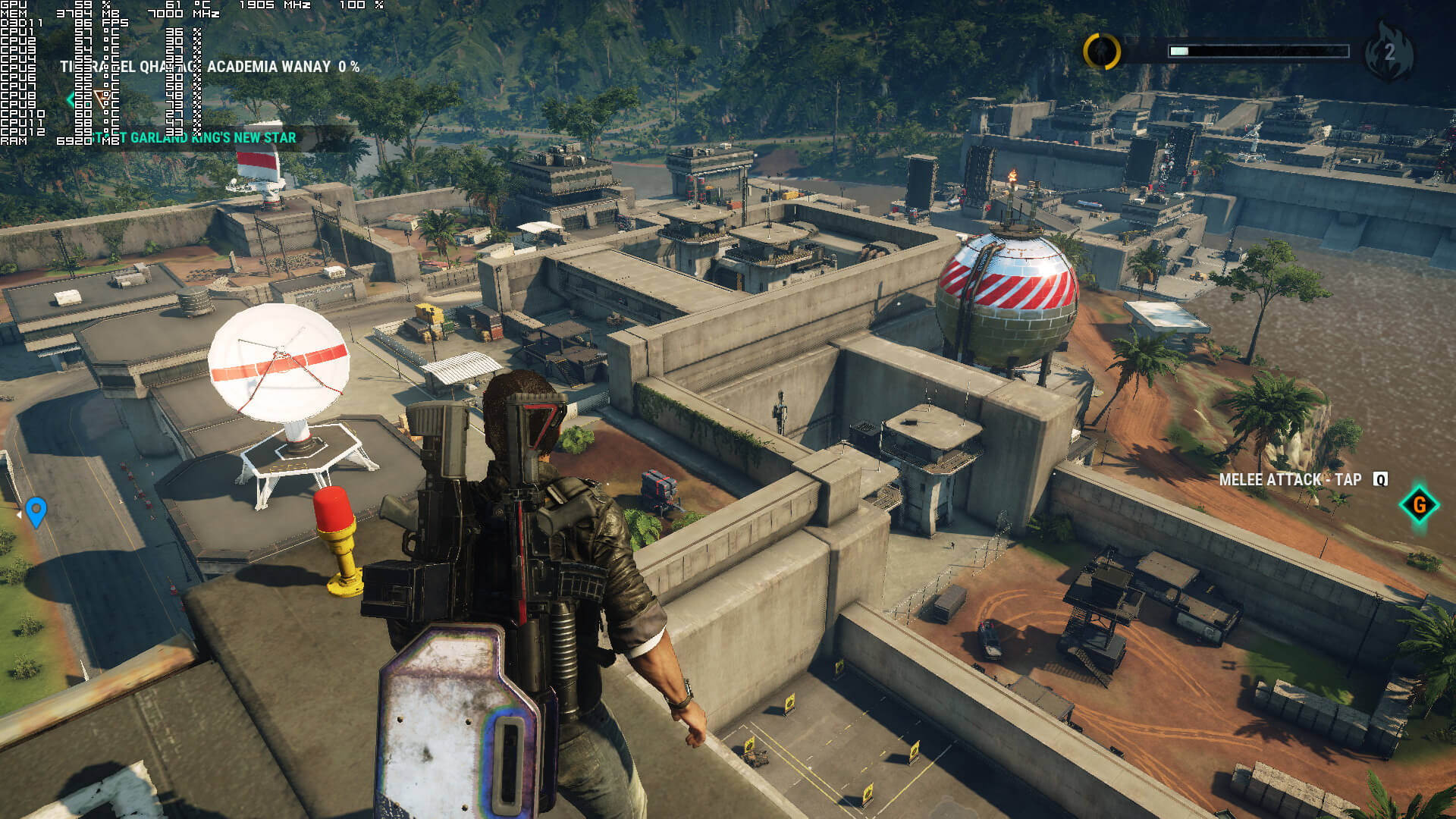 Our simulated dual-core system was simply unable to offer a smooth gaming experience, though we did notice a performance improvement when we enabled Hyper Threading. On the other hand, our simulated quad-core and six-core systems saw a noticeable performance hit when we enabled Hyper Threading. Still, both of these systems were able to run the game with constant 60fps, meaning that a wide range of players will be able to enjoy the game if, and only if, their CPUs are paired with NVIDIA’s hardware. 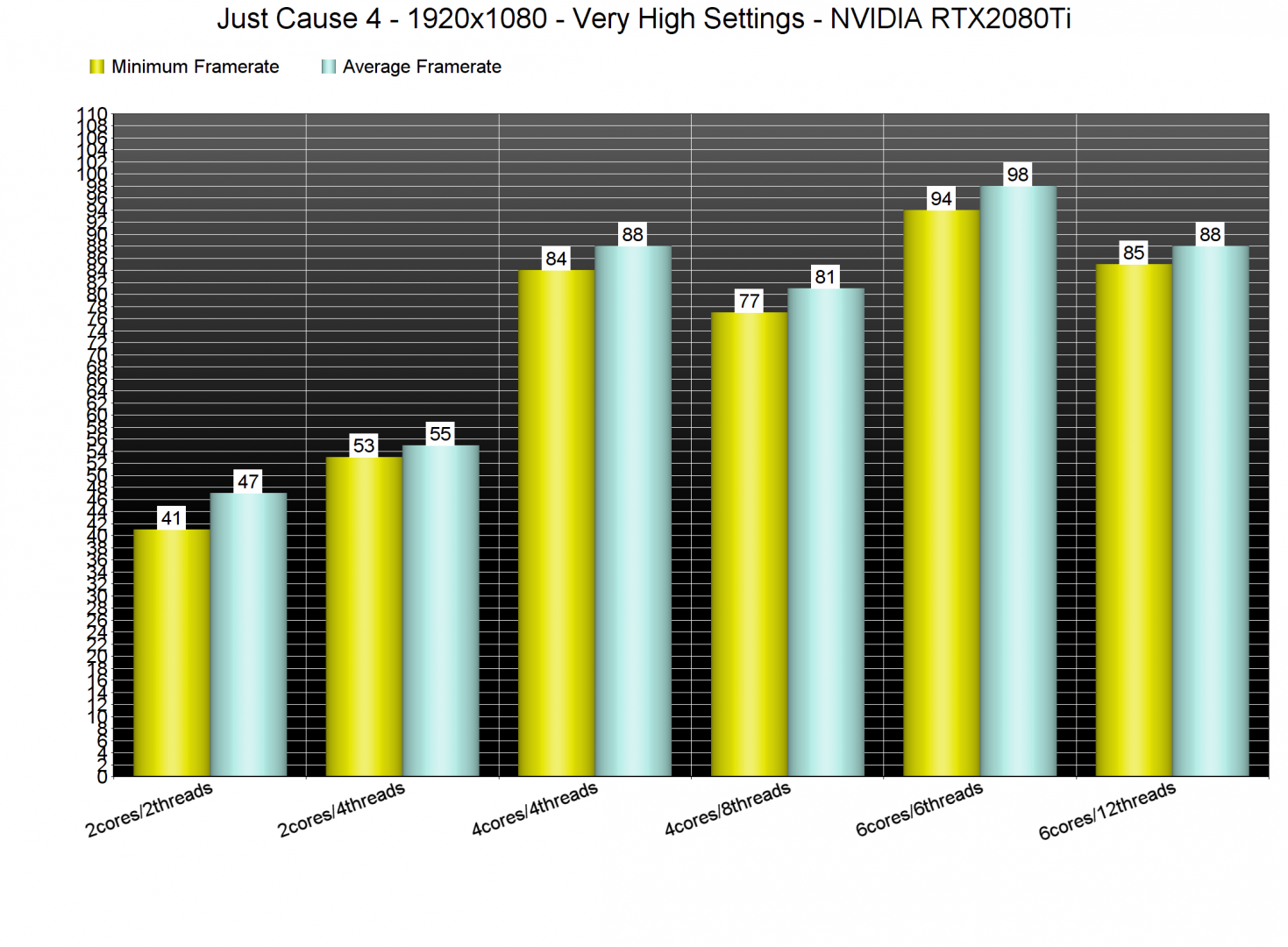 The reason we’re saying this is because, like most DX11 games, AMD’s drivers have a performance hit on older systems. While our GTX980Ti was able to maintain a 60fps experience at 1080p on Very High settings, our AMD Radeon RX Vega 64 saw some drops to 50s in the aforementioned CPU test scene. Do note that our CPU was not maxed out when using the AMD Radeon RX Vega 64, meaning that this could be a memory frequency limitation. Either way, Just Cause 4 is another game that under-performs on AMD’s hardware mainly due to the DX11 API on systems that cannot overcome via brute force the additional overhead introduced by the red team’s drivers. 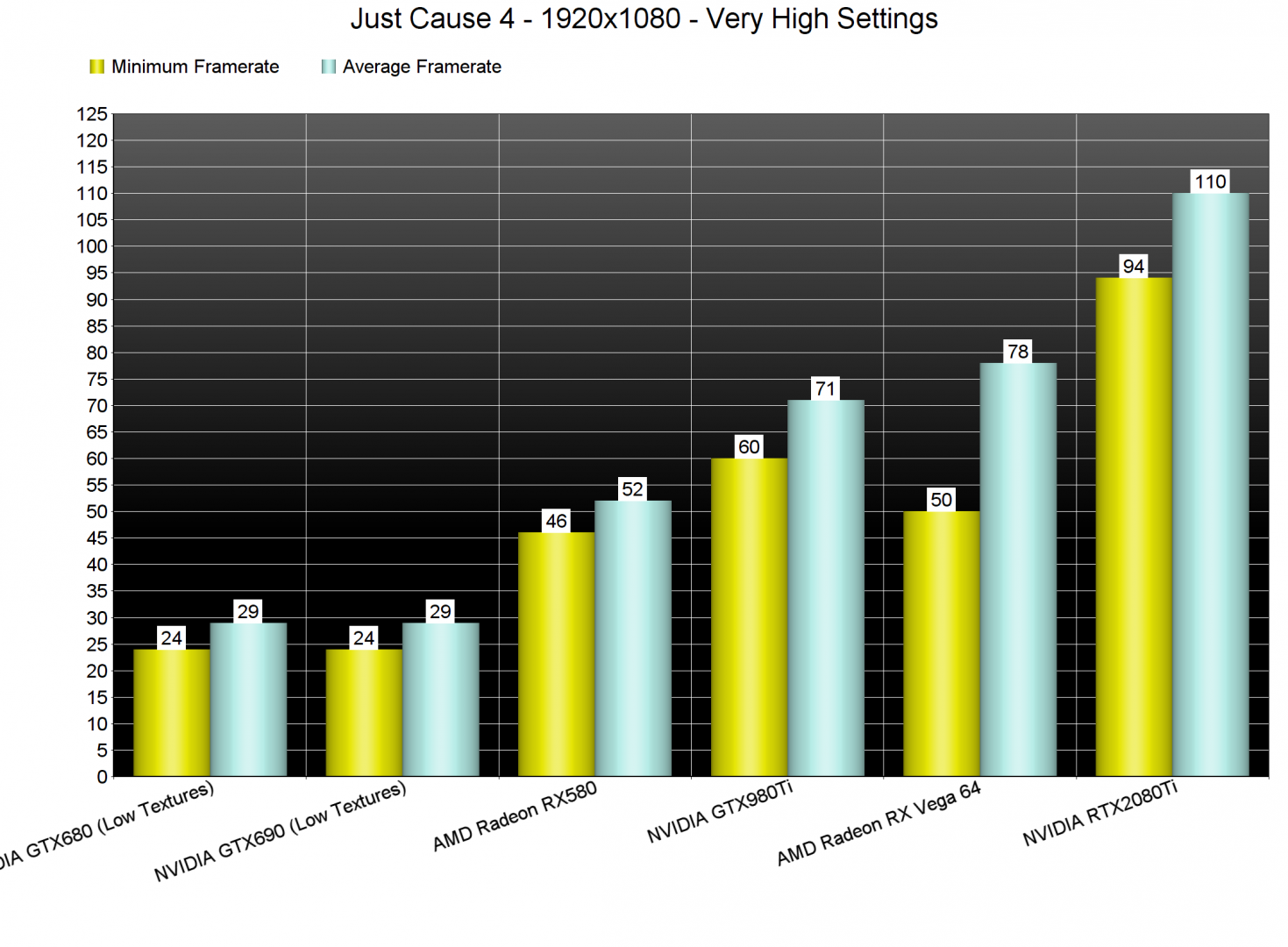 While Just Cause 4 does not require a high-end CPU, it does require a high-end GPU, especially if you want to game at anything higher than 1080p. At 1440p, our RTX2080Ti was the only graphics card capable of running the game with 60fps. And in 4K, even NVIDIA’s most powerful gaming GPU was unable to offer a smooth experience. Moreover, and while Just Cause 4 was advertised as one of the first games supporting DLSS, there is no support yet for NVIDIA’s unique anti-aliasing technique. 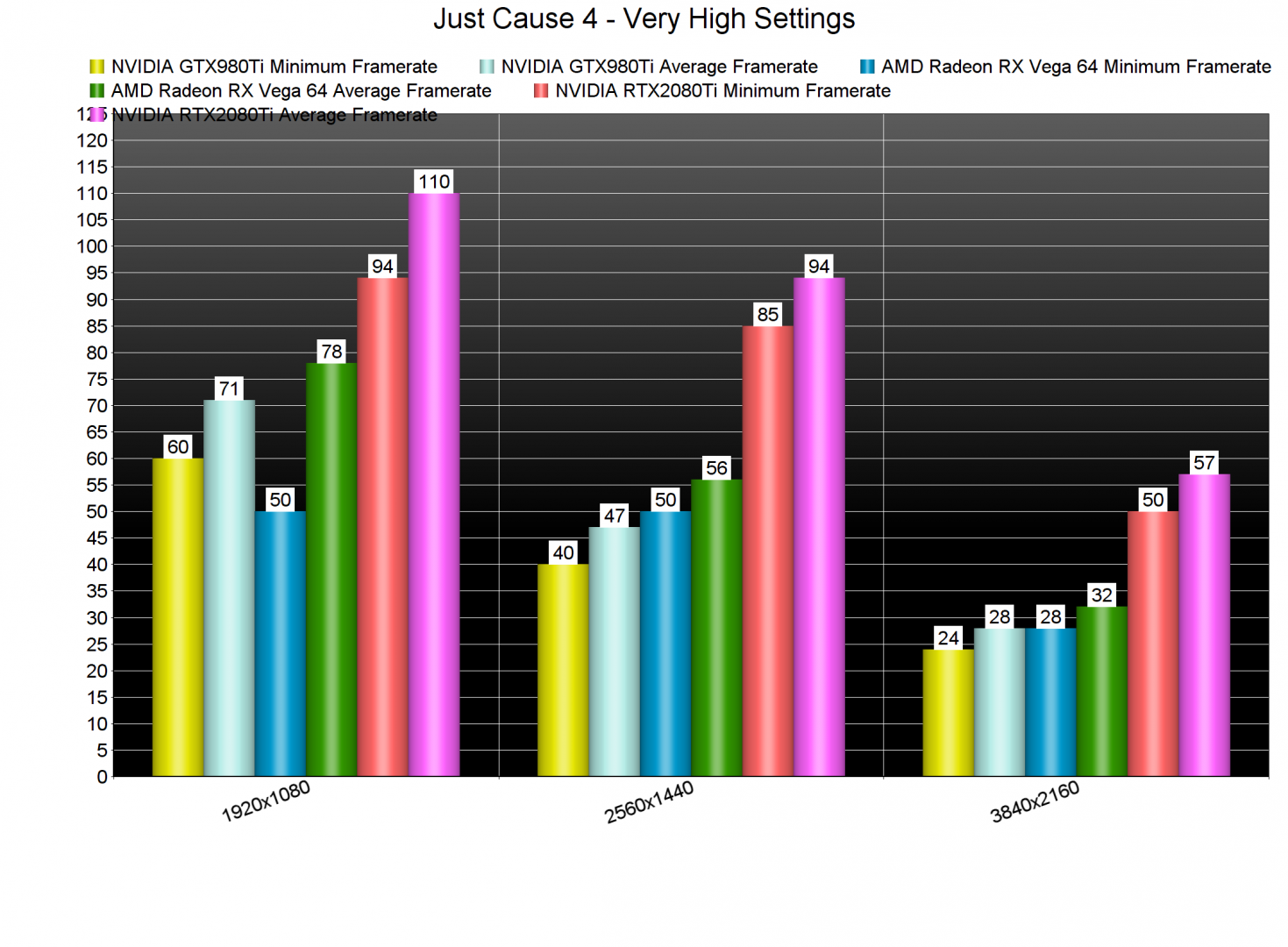 Just Cause 4 does not come with any graphical presets so we’ve decided to simulate the Low, Medium, High and Very High settings. For High, we simply reduced the sliders from Very High to High for all the options that allowed such a thing. For Medium, we reduced our sliders to Medium and disabled all of the other settings (like Ocean Tessellation and Screen Space Reflections). And for Low, we simply reduced the sliders to Low. Moreover, for this particular test we’ve benchmarked the following scene which put more stress on the GPU than the CPU. 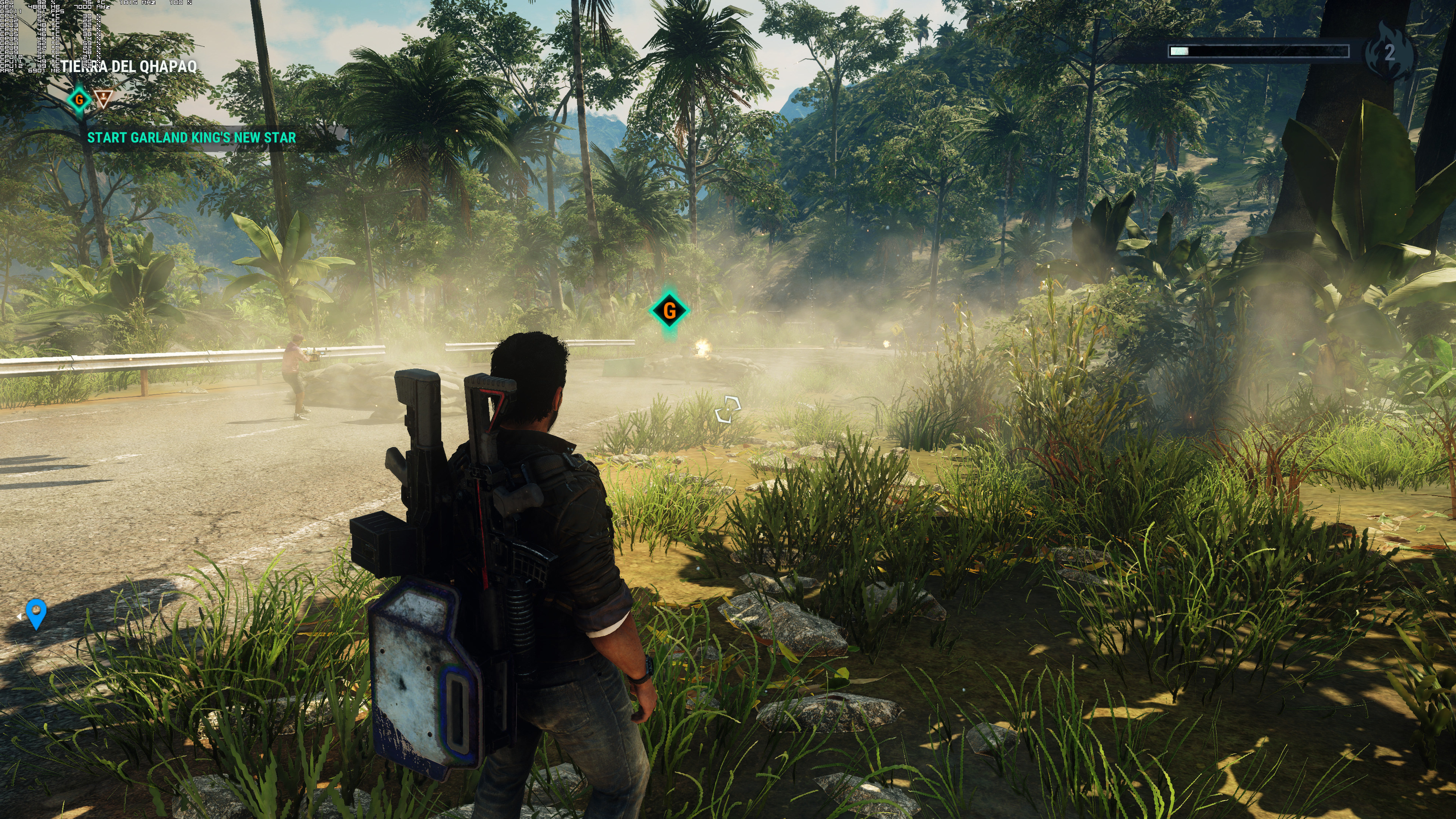 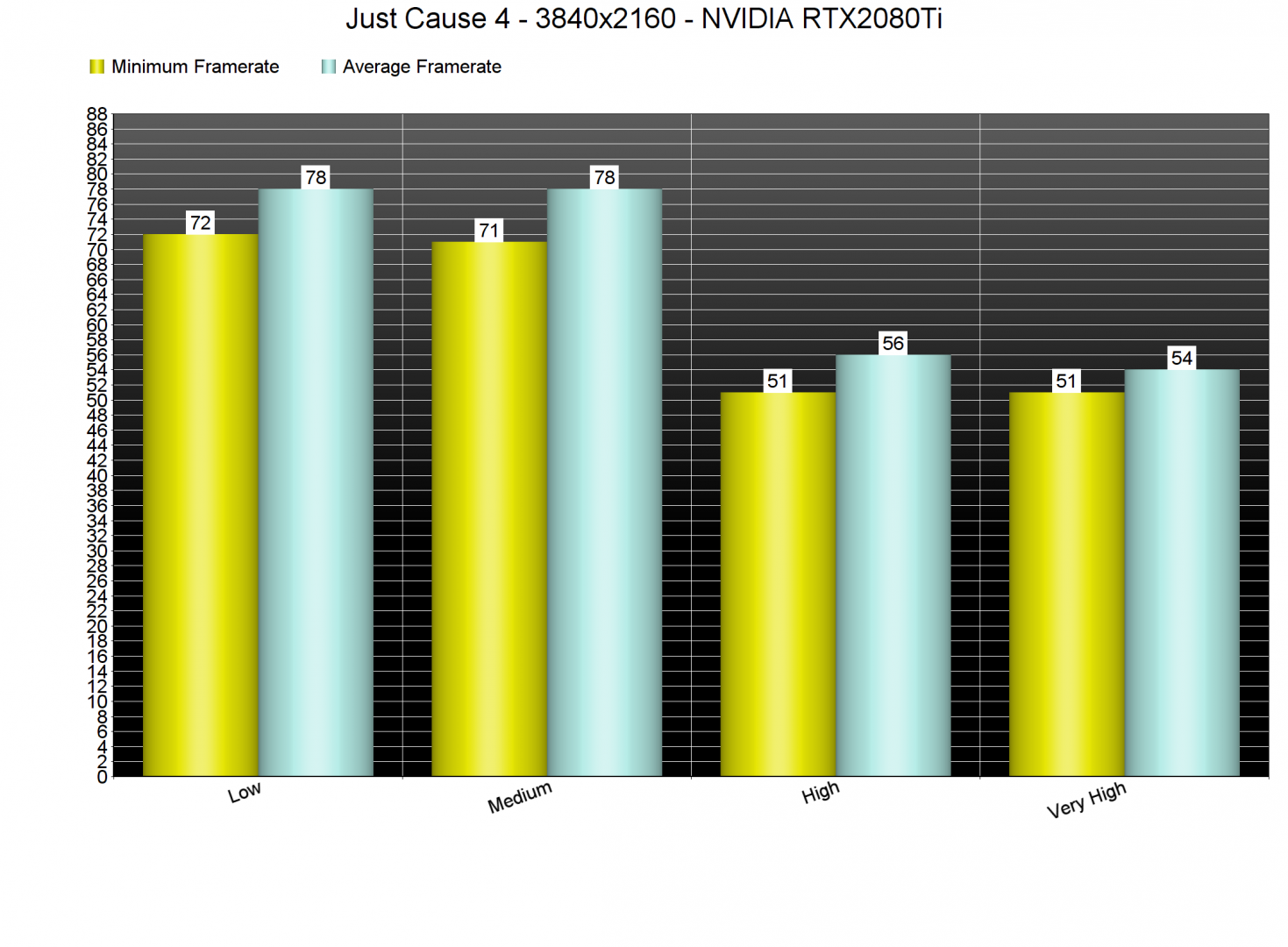 As it’s crystal clear, Just Cause 4 requires a really powerful GPU in order to be enjoyed. However, the game’s visuals do not justify these high requirements. There is a lot of pop-in when wandering around the open-world environment, the textures are not that great, the lighting is as flat and old-gen as it can get under certain circumstances and the ocean/water looks really, really bad. In fact, and with the exception of some truly amazing physics set-pieces, Just Cause 4 can look worse than Just Cause 3 in a lot of areas.

In conclusion, Just Cause 4 is a big letdown and feels worse than Just Cause 3. While the game does not require a high-end CPU, its visuals do not just its high GPU requirements. Not only that, but the game can look worse than Just Cause 3 in multiple occasions. Moreover, the menus are still not that great on the PC. For instance, you cannot move the map with your directional keys, you cannot go back to the previous menu wit the ESC key (you need to press Ctrl) and – I kid you not – there is no keyboard key to press in order to apply your settings in the graphics settings (you’ll need to press the left mouse key). Given the ridiculous state of the PC version at launch, we can safely say that Just Cause 4 PC is just a console port and nothing more. And that’s a shame because Just Cause 3 at least felt like a PC game!