Darksiders 2 was released a month and a half ago on the PC, but due to some other games – that were released alongside with it – its Performance Analysis got delayed. The game suffered from some port issues, something that was acknowledged by THQ themselves, and here we are today to see whether this game has been improved or not. Is Darksiders 2 a better PC game than it was a couple of weeks ago or not?

As always, we used an overclocked Q9650 (at 4.2Ghz) with 4GB RAM, a GTX 295, Windows 7 64-bit and the latest version of the GeForce ForceWare drivers. The good news here is that Darksiders 2 is not a CPU heavy title and you won’t encounter any sequences that will stress your CPU. This is a step to the right direction, as the first Darksiders game featured some scenes that ran with 30fps due to the game’s inability to use more than two CPU cores. It comes as no surprise then that Darksiders 2 scales on quad-cores but does not take advantage of them. This is clearly a game that was optimized for dual-cores and thankfully, PC gamers won’t face any CPU performance issues, provided they have an overclocked dual-core processor. The game ran with 70-80fps at 1080p and max settings, with some drops to mid 50s at various scenes. 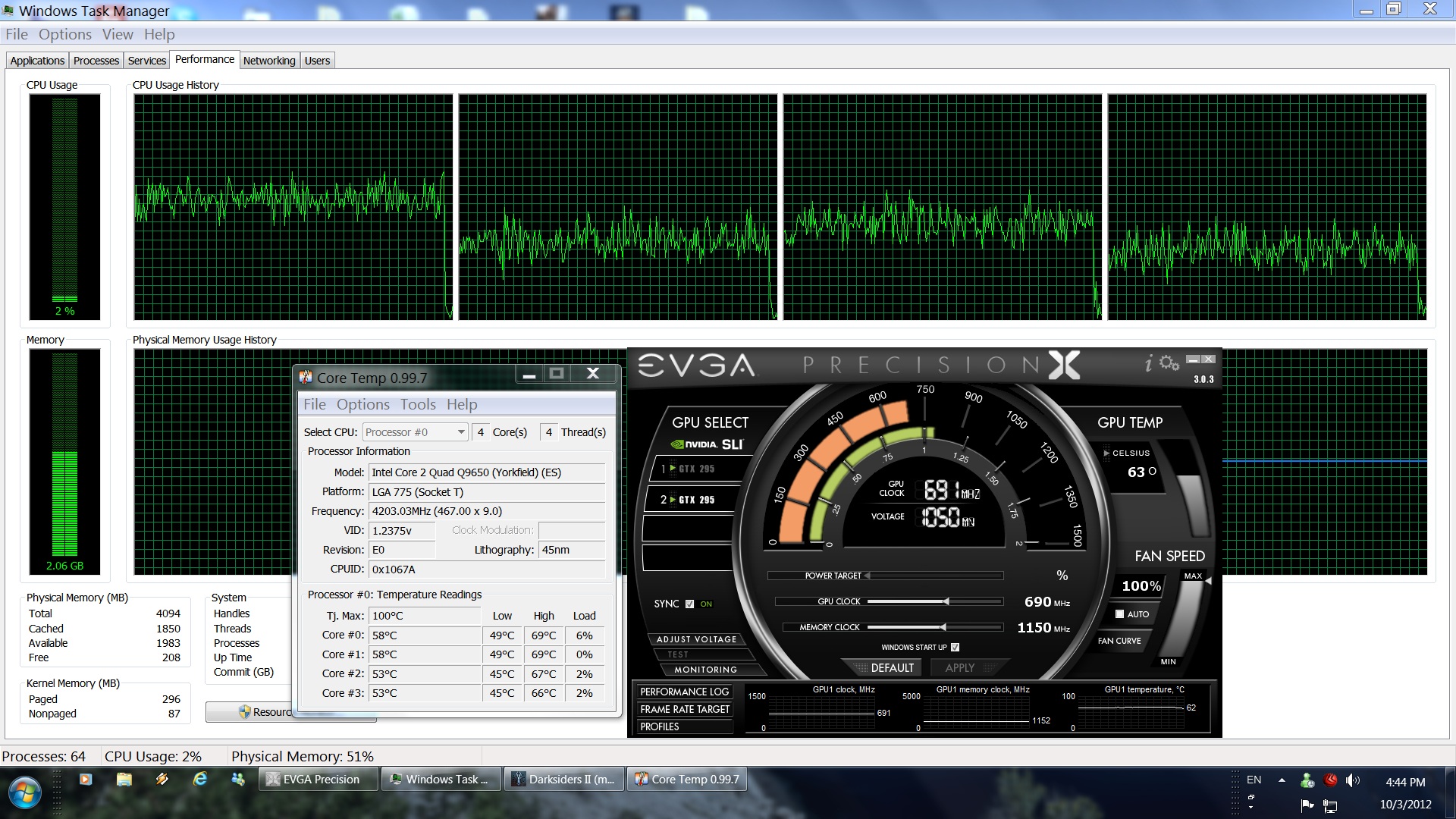 What really surprised us were the game’s GPU requirements. At this point, we’re pretty sure that there is something wrong with Darksiders 2’s engine, as the game stressed our GTX295 as much as Crysis (and any other demanding game) does. This wouldn’t be an issue if the game offered visuals that could justify such requirements. Unfortunately, Darksiders 2’s graphics are not what we’ve expected. There are A LOT of low-resolution textures, noticeable pop-ups for objects while roaming the levels and, ironically, Vigil Games has not implemented any meaningful graphical options to this title at all. PC gamers can tweak the game’s resolution, VSync, SSAO and Shadows Quality. And that’s that. No way to adjust the game’s detail, the level of detail, or the quality of textures.

As said, Darksiders 2 will definitely heat up your GPU. Take for example the following screenshot. The game ran with 50fps during that scene and quite frankly, there isn’t anything appealing on that particular screen. All we get is a bunch of low-resolution textures and a nice view distance. There aren’t any visible objects that would – supposedly – stress the GPU, there aren’t any reflections that would put the shaders units to good use, geometry is not up to what we’d expect from a modern-day game, there is no POM for the ground terrain and there aren’t any global illumination effects. To be honest, this scene should run with more than 100fps as this kind of visuals can be found in last year’s titles. For what is worth, a single GTX275 will offer you 20-30fps (at best) on max settings. On the lowest available settings, a GTX275 will offer you a 40-50fps experience. 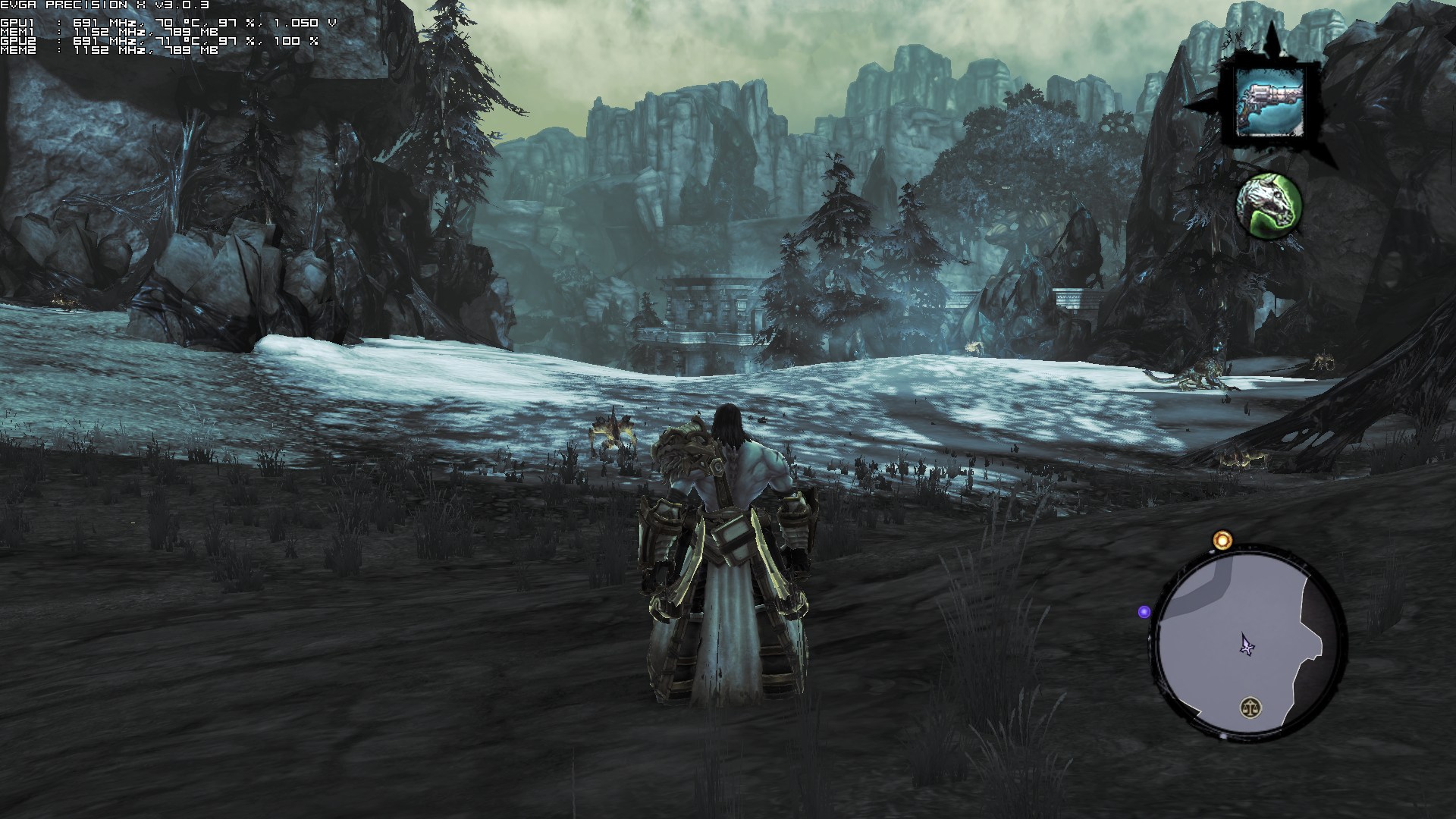 The biggest gripe we had with Darksiders 2 was not its mediocre visuals or that it required a high-end GPU in order to be enjoyed, but the fact that there was an annoying stuttering effect in SLI mode – an issue that has not been addressed yet. Darksiders 2 suffers from stuttering while moving the camera, something that could not be resolved with any of the suggested solutions (apart from disabling SLI). We tried forcing VSync via D3DOverrider, we limited our fps to 60s, we disabled Threaded Optimization from the game’s profile… we even downgraded our drivers to some older versions. Things did not improve though as the stuttering effect was still there. D3DOverrider has managed to reduce it, but there were still scenes in which that annoying issue was kicking off. Not only that, but the game seems to be suffering from a memory leak. After quick travelling to another location, we noticed our GPU usage dropping to mid-70s. Naturally, we tried to Alt+tab and to our surprise, our GPU usage skyrocketed to 97% after re-entering the game.

All in all, Darksiders 2 is a mess. Vigil Games and Nvidia need to put their heads together and fix this title. Vigil should optimize its engine as it requires high-end GPUs for visuals that are average at best. Nvidia, on the other hand, should work with Vigil to resolve the stuttering and the memory leak issues that are present when SLI is enabled. Even though Darksiders 2 is an interesting game with great combat mechanics and puzzles that will remind you those of Tomb Raider and Prince of Persia, its PC version suffers from a lot of performance issues, even one month and a half after its initial release. And that’s something unacceptable. 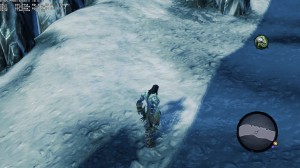 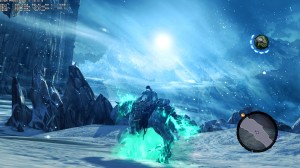 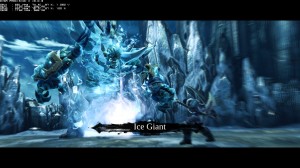 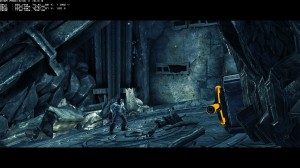 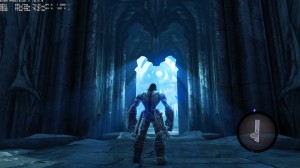 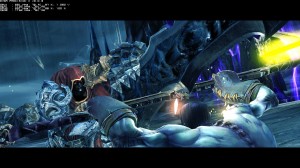 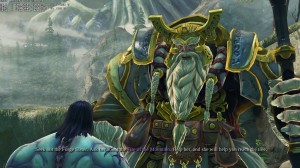 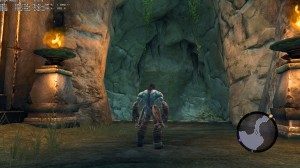 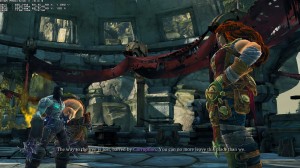 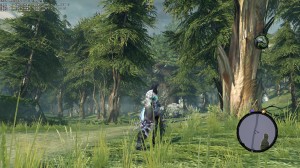 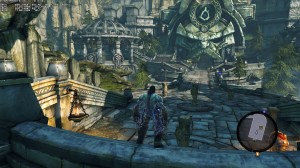 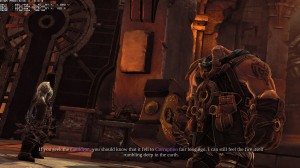 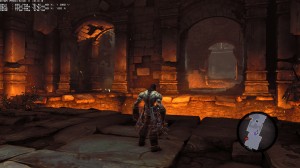 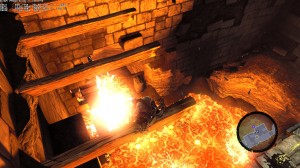 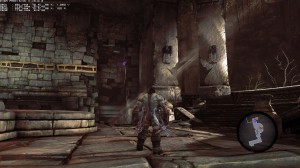