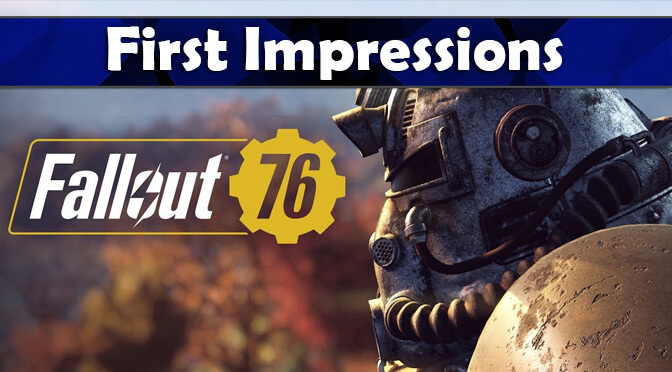 I went into Fallout 76 sure I would hate it. I mean, instead of taking the effort to actually develop a proper story with actual characters, towns, and factions, it seemed like Bethesda just pushed something out with as little work as possible. “Every character is a real person” sounded like marketing garbage and an epic fail.

And then I played the game. And the hours flew by. And I’ve been engrossed and engaged and have woken up each day wanting to jump right back in! And now, 15 hours along, I’m still excited to find the next delightful discovery!

Not since Fallout 3 have I felt this strong feeling of optimistic wanderlust! This feels like coming home to another comforting Bethesda open-world, and I’m taking my time to learn, adapt, and loot everything not nailed down!

Consequently, I must face the shocking and unlikely truth: I’m really enjoying this game despite the online nature! I almost cannot even believe I’m saying this! I’m the survival-hating, MMO-despising, single-player-loving guy! I was supposed to hate this!

Before you roast me in the comments, let me explain my unexpectedly joyous Fallout 76 first impressions!

No NPCs, No Worries

Perhaps my biggest surprise is how little I’ve missed having alive NPCs and “proper” quests. Instead of feeling huge disappointment, I’ve been quite happy to simply have my “quest giver” be a dead corpse with a note or a computer terminal.

All NPCs being dead has actually streamlined my exploration, letting me avoid all the “run around town talking to bland NPCs” stuff that was becoming very tiresome for me in Fallout 4. Speaking of which, I actually think my enjoyment of Fallout 76 is tied to my disappointment in Fallout 4.

After Fallout 4, it was clear Bethesda was never going to give us a truly intelligent choices and consequences Fallout with realistic characters and well-written dialogue such as Fallout New Vegas. They just aren’t capable of creating this. As such, Fallout 76 wisely sticks to Bethesda’s strengths by eliminating the direct NPC interaction.

This radical shift makes sense to a degree. Bethesda’s games are always overwhelmed by game-breaking quest logic bugs and NPC scripting failures, so that’s mostly been deleted to focus on Bethesda’s best-in-class environmental storytelling. No one builds worlds quite like Bethesda!

It’s not all happy exploring of course. The online component comes with the usual issues. When I first began in my room in Vault 76, the very first sound I heard was a crying baby. I actually had a flashback to Fallout 3’s start, and I thought maybe this vault had a baby in it?

Nope. It turns out some real-life father was playing the game with his baby in his room. Then other real-life voices, usually with low-quality mics, started clashing, and I was totally unable to hear the actual in-game voice speaking to me.

Despite that dubious vault-start, things became much more pleasant as I entered the wide world and players dispersed from that choke point. Each server contains a maximum of 24 people, and the world is huge. Therefore, I only occasionally ran into other players.

Having such a low player count works out very well. I know there’s others out there (easily tracked yellow dots on the map), but I usually only have to deal with them if I so desire. And there’s easy mute/block tools to ensure people don’t get too annoying.

This isolated yet sparsely populated approach also makes so much sense from a lore standpoint. The idea is you’re one of the few dozen Vault-dwellers let loose upon a newly annihilated world, so occasionally bumping into each other and working together actually aids the concept of the game world. I wasn’t expecting that!

The Joys of Friendship

I should make clear I generally prefer playing solo, taking my time to explore. However, Fallout 76 gives me something the prior games haven’t: the dream of discovering together with a real-life friend.

I’ve run into very kind players, and we’ve teamed up and explored several locations together. We’d point out ammo stashes and workbenches, and help protect each other. I found myself having a truly unique and memorable cooperative Fallout experience!

And isn’t this what so many have wanted? Not some Fallout/Elder Scrolls-MMO rubbish but a simple coop mode where we can team up with one or two trusted friends and engage in jolly cooperation! So far this is what Fallout 76 has given me. I tell you the truth!

What makes Fallout 76 so great is how it feels like a single-player Fallout that gives me the option to team up. As stated, I play mostly solo, but if I run into another player, we can share stories and team up for an hour or so. Then we go back to the lonesome road, finding our own meaning in this desolate world.

I’m actually amazed at how well Fallout 76 runs. Sure, the game engine is outdated and Bethesda don’t know how to optimize a game to save their lives. Yes, the framerate is bad compared to other proper games. However, I can manage to reach the 63 FPS hardcap (locked FPS and FOV is terrible) with my pretty powerful Intel i7-3930k CPU and nVidia GTX 980 Ti GPU.

I’ve been disconnected twice, but almost no progress was lost for me. The game stutters and freezes for a second or two when loading certain areas. And of course enemies will glitch out like every other Bethesda game. Both the AI and load times are…a bit too slow.

It should be noted Bethesda has announced plans to improve and update that game, so waiting a few months or longer to play is always a fine plan. But I will say my experience has been good for a new online game, and the game is very playable in its current state.

Perhaps the largest issue with the game is how you don’t really impact the world at all. There are no world-defining choices to make like Fallout 3’s saving or destroying Megaton.

To highlight your lack of impact, quest items and events respawn over and over, giving you the feeling the game doesn’t even care that you’ve already found and repaired that station twice already.

Instead of some grand destiny, you’re just one vault dweller, who’s unlikely to do big things or save the day. Some will question the point of it all and feel this is a letdown from the classic Fallout games.

However, I had a revelation of sorts after about 5 hours. The point of Fallout 76 is my personal experience. I was “chosen” to be in Vault 76, but once I enter the world nobody has chosen me for anything beyond “go explore” and “try to rebuild.”

There’s a freedom in this ambiguous directive. I get to explore this beautiful yet barren world at my own pace. I can follow the well-voice-acted “main quest” holotapes, but I can also just wander off to discover or build a settlement. Whereas other online games belong to the developer and dictate your play, Fallout 76 feels like my world.

For me, it all clicks. I’m loving the discovery, the isolation, the occasional coop, and the overall Fallout feel. Sure, I wish there was more impactful storytelling. I wish the game engine and graphical quality wasn’t so poor. I wish there wasn’t a real money shop.

And yet, right now I want to stop writing this and delve back into the West Virginia wasteland. In 20 more hours will it get boring? I don’t know, but Fallout 76 is giving me a comforting dose of familiar Fallout mixed with a new but appealing cooperative cocktail. Maybe it’s the irradiated water talking, but I’m gulping Fallout 76 down!

PS: some people are talking about the “end-game” and nukes and all that. Don’t let this scare you. I highly doubt all the PvP-nuking stuff will negatively impact the experience for us regular players.

Here’s various points broken into the good, the bad, and the rad!

Playtime: 15 hours total. Nick’s reached level 12 and explored a fraction of the map. There’s dozens more hours of exploration ahead!