Battlefield 2042 is currently available to those that have pre-ordered the Gold and Ultimate editions, and will be made available to everyone on November 19th. Powered by the Frostbite Engine, the game supports both DLSS and Ray Tracing effects. As such, we’ve decided to benchmark DLSS and the RT effects and share some comparison screenshots.

Unfortunately, the DLSS implementation in Battlefield 2042 is not that great. In 4K, while DLSS Quality can minimize aliasing, it also produces a noticeable blurrier/softer image. Below you can find some comparison screenshots between 4K native (left) and DLSS Quality (right). I’ve also used NVIDIA’s ICAT to zoom in and showcase the blurrier textures of DLSS. Sadly, DICE has not added a DLSS sharpening filter, something that would greatly benefit this game.

Now the good news for RTX owners is that DLSS can bring a noticeable performance boost. By using DLSS Quality, we were able to get really close to a 60fps experience at 4K/Ultra Quality with Ray Tracing. That’s on Conquest 128-player matches, so that’s definitely great news. So, if you want to play the game with Ray Tracing, you can do so, whether you have a 4K or a 1440p monitor. However, for 1440p monitor owners, we suggest using your native resolution. 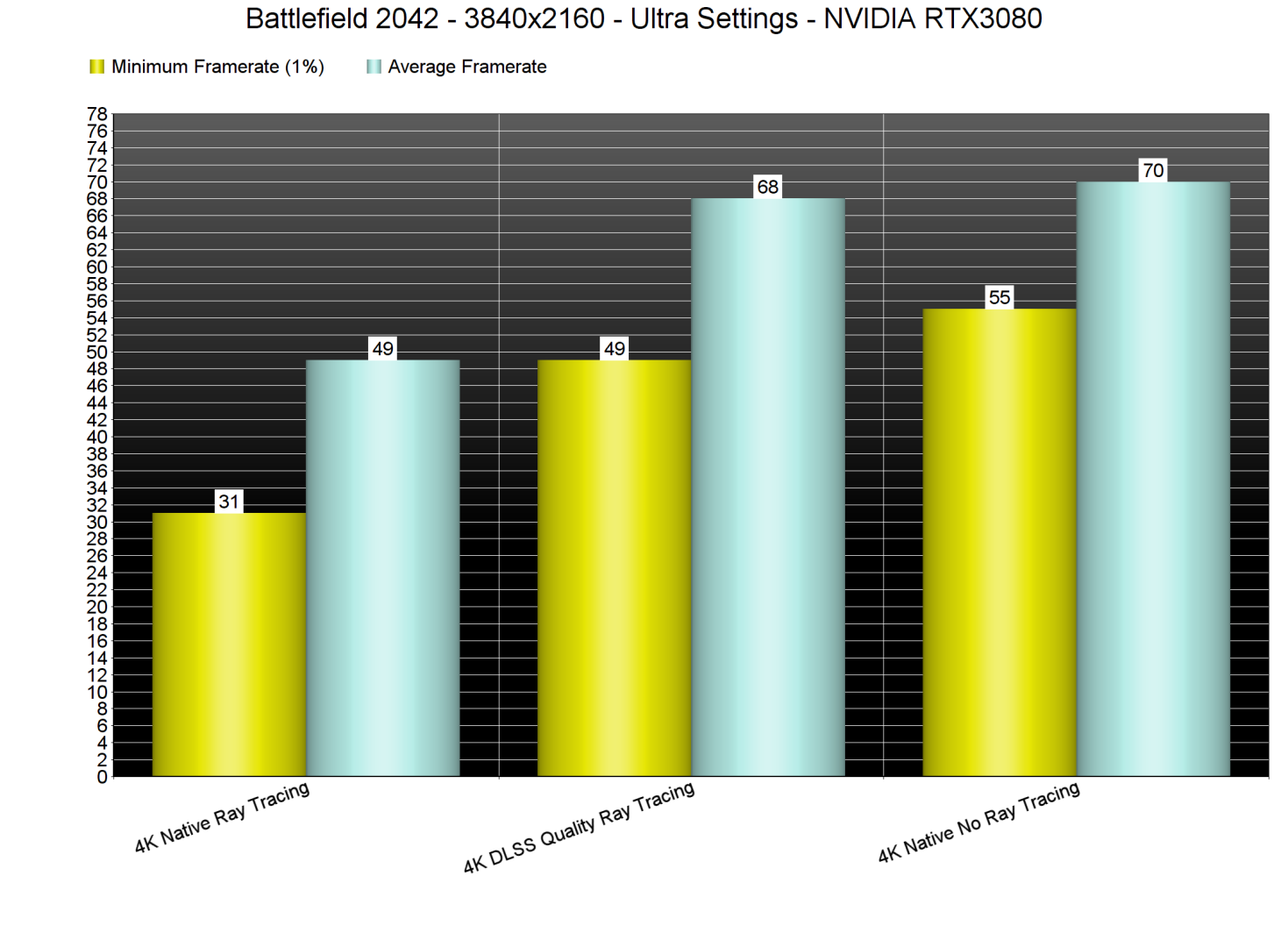 As said, we won’t have a traditional PC Performance Analysis for BF2042 as it’s almost impossible to recreate the exact same conditions in a multiplayer game. Still, and for those wondering, we were able to get a constant 60fps experience at 1440p/Ultra/Ray Tracing with our PC test system. However, and even when our framerate was at 70fps, the game felt stuttery. We are not talking about frame pacing issues here. After all, our MSI Afterburner frame graph seemed quite good. Still, the game never felt smooth and that’s something I did not experience in the beta builds. This “stuttery” issue was amplified in the Breakaway map (in Conquest Mode). I don’t know whether this is a server/network issue, but the offline matches  (with bots) felt smoother with less “choppy” mouse movement.

Lastly, it’s worth noting that Battlefield 2042 is a great looking game. So, while an RTX3080 cannot run it with constant 60fps at 4K/Ultra, we believe that its visuals justify the GPU requirements. On the other hand, and despite using DX12, the game would benefit from some additional CPU optimizations. Regardless of that, the game’s graphics are among the best we’ve seen. Yes, destruction may be limited (compared to other games), but the lighting, textures, effects and overall image quality are amazing.

All in all, and while the raw numbers appear to be very good, Battlefield 2042 does not run smoothly on PC. Moreover, and since this is a multiplayer game, most gamers will not enable its Ray Tracing effects. And, to be honest, that’s really sad as Ray Tracing Ambient Occlusion can improve the game’s graphics. Additionally, the DLSS implementation is not among the best we’ve seen. Don’t get me wrong, it’s miles better than Version 1.0. However, I’ve been spoiled by some games that have less aliasing and look sharper with DLSS than with native resolution!