Respawn’s free to play battle royale game, Apex Legends, was pleasantly announced and released at the same time. The game is powered by a heavily modified version of the Source Engine and it’s time now to benchmark it and see how it performs on the PC platform.

For this PC Performance Analysis, we used an Intel i7 4930K (overclocked at 4.2Ghz) with 16GB of DDR3 RAM at 2133Mhz, AMD’s Radeon RX580 and RX Vega 64, NVIDIA’s RTX 2080Ti, GTX980Ti and GTX690, Windows 10 64-bit, GeForce driver 417.71 and the Radeon Software Adrenalin 2019 Edition 19.2.1. The reason we used the 417.71 instead of the recently released 418.81 is because we were getting major crashing issues (DXGI_ERROR_DEVICE_HUNG error) with the latter. As such, and if you are gaming on an NVIDIA GPU, we suggest using the previous WHQL driver. Furthermore, NVIDIA has not released any SLI profile for this game so our GTX690 performed similarly to a single GTX680.

In order to find out how the game scales on multiple CPUs, we’ve simulated a dual-core and a quad-core system. Apex Legends does not require a high-end CPU in order to be enjoyed, and can be easily described as a GPU-bound title. For our CPU tests we lowered our resolution to 720p as we were GPU-limited – even with our RTX2080Ti – at 1080p. We’ve also benchmarked the “Bridges” area (which appears to the most demanding area in the game). As such, you should consider our benchmark as a stress test, showcasing performance in the worst case scenario. 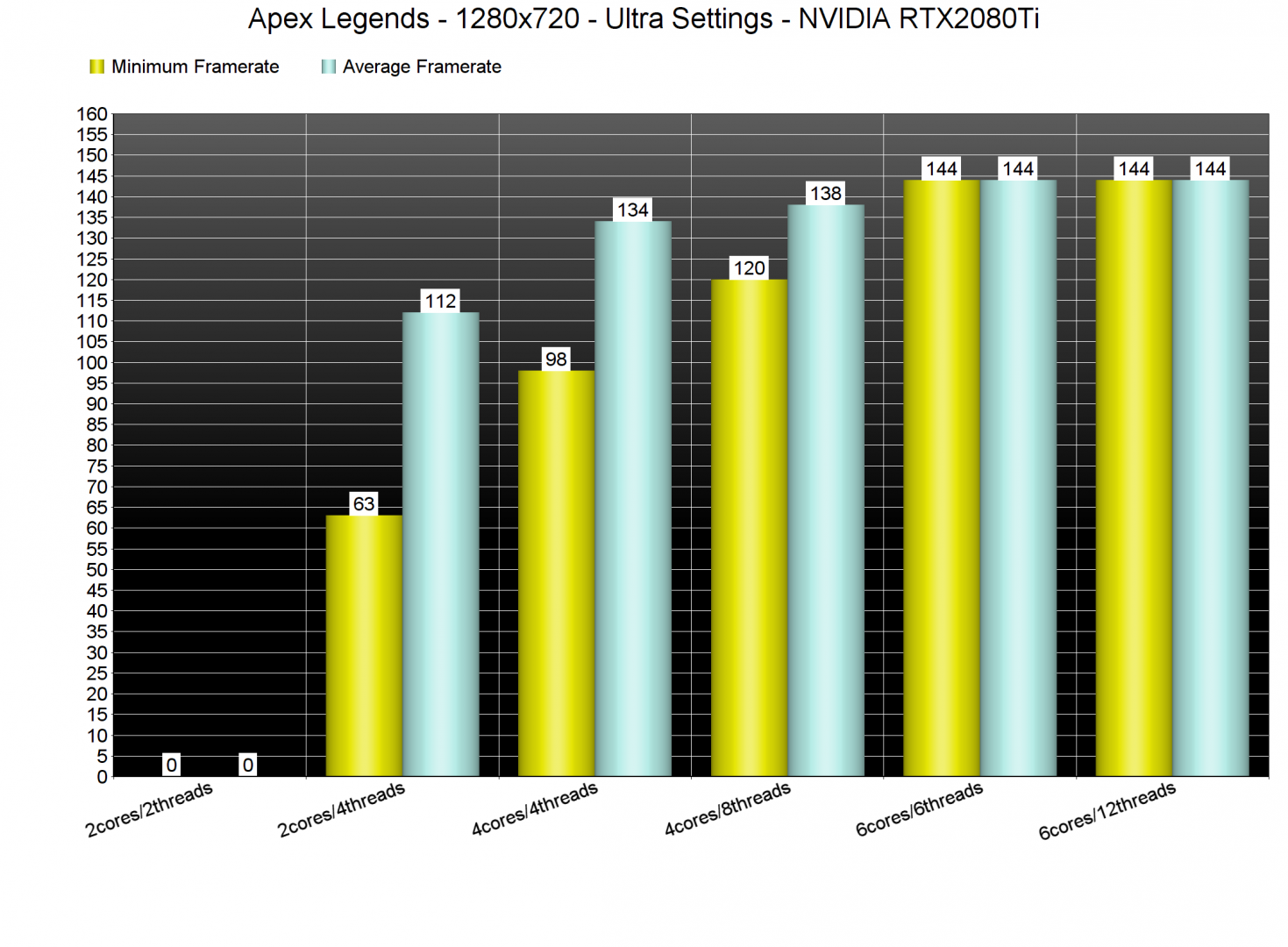 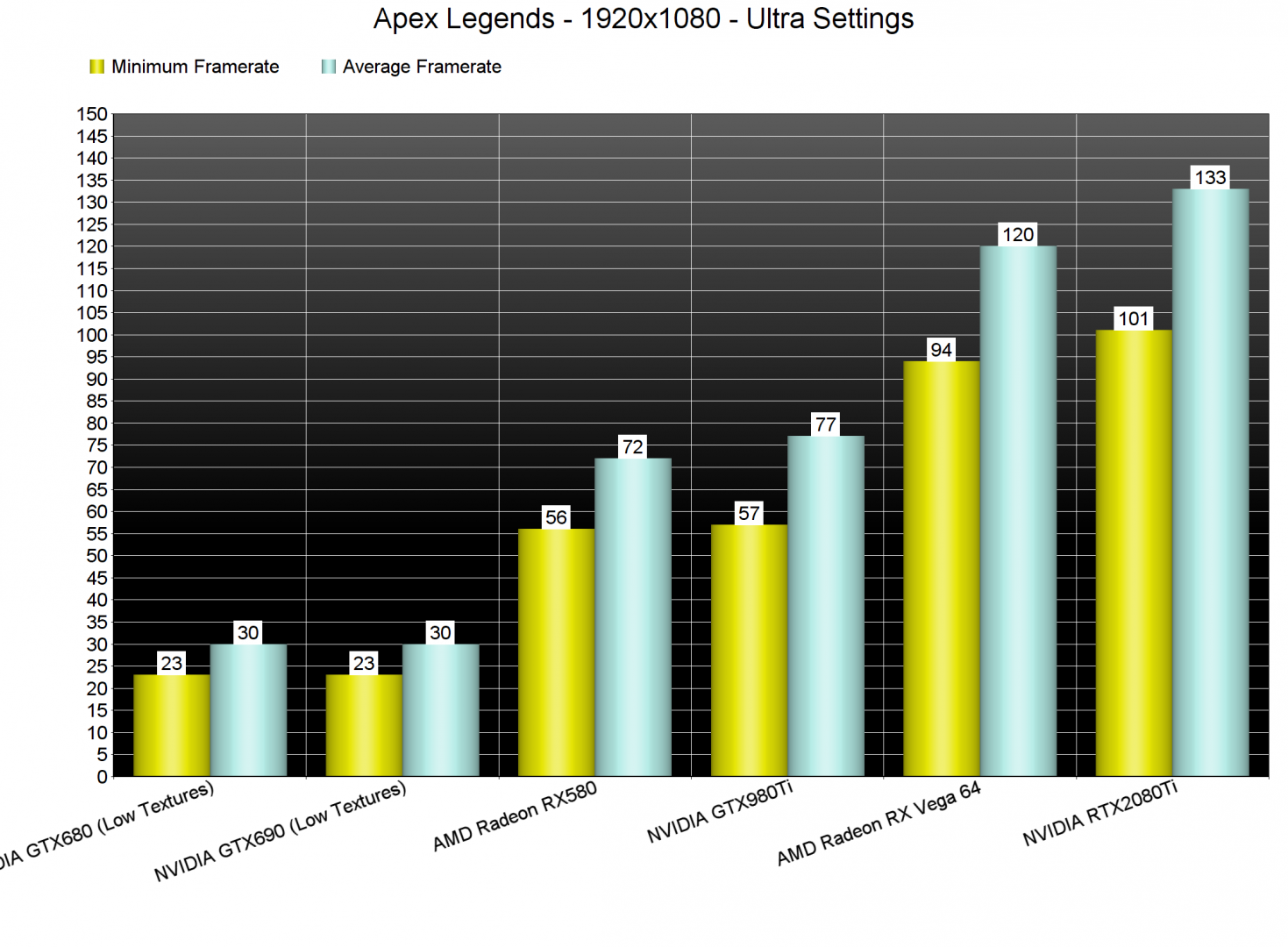 Our NVIDIA GTX980Ti was unable to offer a smooth gaming experience once we raised our resolution to 1440p. On the other hand, and while there were some drops below 60fps on the AMD Radeon RX Vega 64, the game was more than enjoyable. Finally, in 4K, the only GPU that was able to offer an almost 60fps experience was the RTX2080Ti (as we’ve already said, it’s not a constant 60fps experience but it’s really close to it). 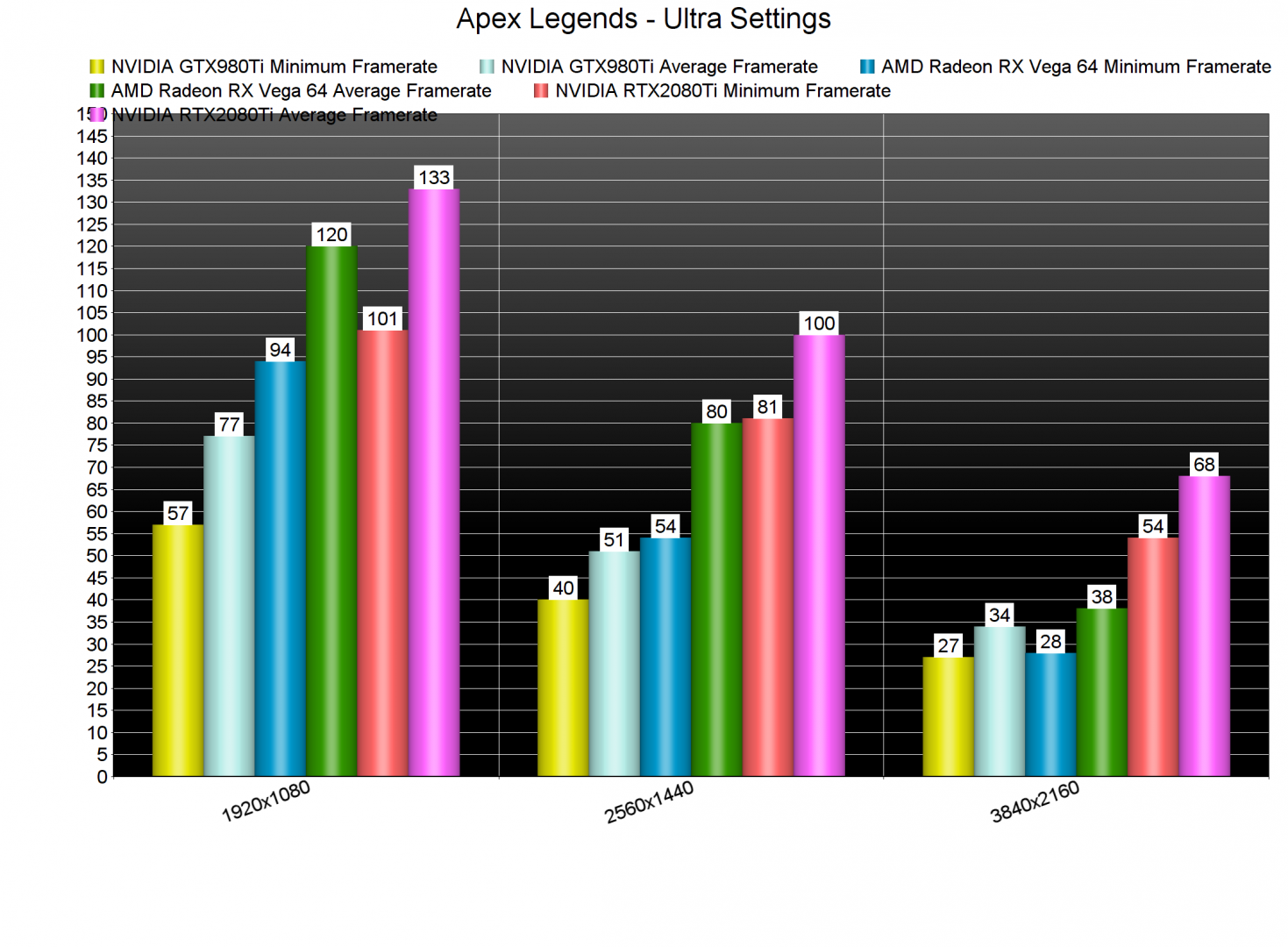 Graphics wise, Apex Legends is not a really impressive title. It looks great but we are pretty sure that there was room for further optimizations or at least more eye-candy. The grass for example does not look that great and there aren’t any cool weather or environmental effects to “wow” you. This is a multiplayer-only game so I guess we should expect this, however Battlefield 5’s multiplayer mode looks and performs better than Apex Legends.

Overall, Apex Legends appears to be running well on the PC. The game does not require a high-end CPU in order to be enjoyed and we did not experience any latency issues. Thankfully, the game offers raw mouse input and does not suffer from any mouse acceleration or smoothing issues. Still, and while it’s for the most part a solid PC product, Apex Legends features some areas that are way more GPU demanding than we’d expect. We’ve witnessed a similar thing in Titanfall 2 so we are not certain whether Respawn will be able to further optimize these areas!