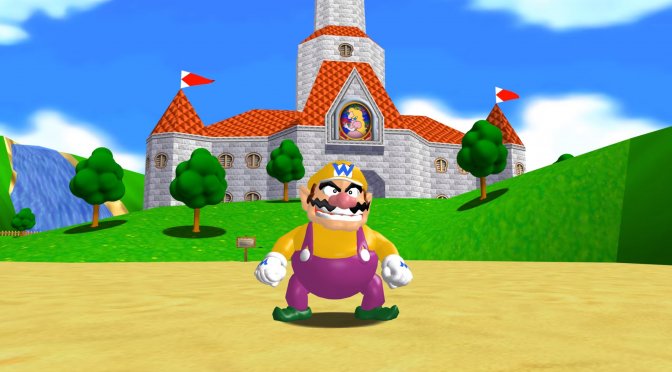 SM64 SGI Project has released a brand new version of Render96 HD Model Pack for Super Mario 64 that adds a Wario 3D model. This Wario mod is basically a character swap mod for Luigi, and by replacing it PC gamers can play Super Mario 64 with Mario’s evil twin, Wario.

Since this is a simple character swap mod, Wario has the same voice with Mario. Moreover, the game’s NPCs refer to him as Mario during the cut-scenes. Still, it’s a cool mod that a lot of Super Mario 64 fans will find interesting.

Furthermore, a new mod came out that brings Mario’s moveset from Super Mario Odyssey to Super Mario 64. By using this mod, players can experience Super Mario 64 in a completely different way. Therefore, we highly recommend downloading it.

In case you weren’t aware of, a team of indie developers released a native version of Super Mario 64 on the PC a while ago. This unofficial native PC version supports DX12, and allows players to use one hell of mods.

There are already HD Textures, a high quality Mario Model, and better draw distance mods. Furthermore, you can find a mod that allows you to play as Luigi.

Below you can find two videos showcasing the brand new mods for Super Mario 64!