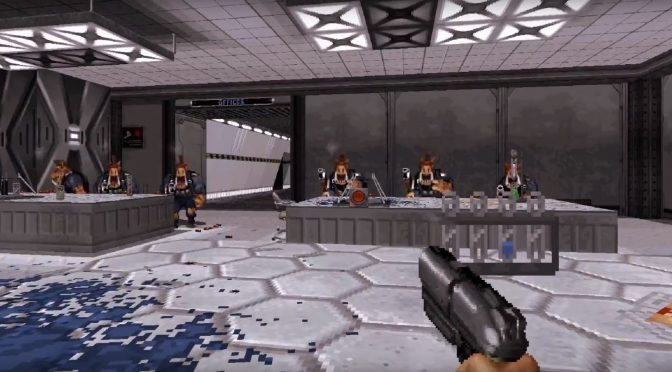 Modder ‘Jblade35’ has released the third episode for The AMC TC. The AMC TC is described as an epic multi-character single player stand-alone game based on Duke Nukem 3D, utilising Eduke32 and the 2.5D BUILD engine.

In this free old-school FPS game, players will assume the role of a member from the AMC Squad.

“The AMC Squad is a paramilitary group formed by a man whose identity is unknown to all but a select few in the EDF and EAF. Using funds from both of those agencies as well as his own, he hired an old friend to track down 7 of the best and most skilled fighters on Earth. This squad was formed to tackle the most severe threats to Earth’s safety, including fighting off the notorious Cycloid race of aliens. However, events soon unfold that dramatically increase the scale of conflict, and the AMC squad must soon deal with a new paranormal world that is new to even the most supernatural members of the team.”

What’s really cool here is that the team has merged episode three with episode one and two, meaning that players can get the complete experience by simply downloading one single file.

Those interested can download The AMC TC from here, and below you can find some key notes that the team shared. Kudos to our reader ‘durka durka’ for bringing this to our attention!