All hell has broken loose, as The War Z – a zombie survival game that has almost the same name with ArmA II’s free mod, DayZ – has been released on Steam. Now getting this massive coverage from all over the world would be a good thing for Hammerpoint, unless of course people started claiming they were a bunch of liars and copycats, that they are offering a game that is faulty advertised, and that they do not support features that were listed on the game’s Steam page. Which is basically what has happened so far, but let’s take things from the beginning.

A couple of months ago, DayZ was released. DayZ is a free mod for ArmA II, that combined an open world area with survival elements and threw in the mix and some zombies to scare tha crap out of you. It was a successful experiment, and PC gamers loved it.

Afterwards, Hammerpoint came out of nowhere and announced The War Z, an open world survival zombie game. Notice the similarities with DayZ? Of course and you can. Hell, even the game’s sub-reddit section is identical to the one of DayZ. Hammerpoint, however, claimed that it has been working on this project for two years, despite DayZ’s success. Ironically, the FB page of The War Z suggests that this is true, as the page was created in 2011. Now we all know that a creator can alter the name and the description of an FB page at will, but let’s take Hammerpoint’s word on this one.

The War Z was meant to follow Minecraft’s business model. Hammerpoint would release an alpha version of it, and then gradually upgrade and fix the game for its fanbase until they hit the beta stage. However, it seems that this plan did not work out for them as the game supports microtransactions and is already available on Steam for sale (even though it’s not clearly finished).

What’s also funny is the fact that the game is borrowing assets from a previous Hammerpoint game, War INC. Spotted by NeoGAF member ‘Gez’, the following screenshots showcase the similarities between some vehicles that are featured in Hammerpoint’s titles. Now we don’t consider this a bad thing. After all, Crytek has been doing it (for the grass, trees and rock models featured in Crysis) as well as Treyarch and Infinity Ward. This is nothing new and we can’t blame devs for re-using their own assets. 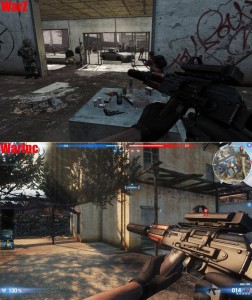 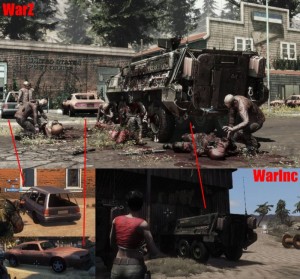 For the time being, let’s overlook the fact that The War Z team copied and pasted the game’s TOS from League of Legends (and no, we are not kidding). Let’s also overlook the fact that an ex-mod claimed that The War Z was a fraud. Let’s also forget that the FAQ contains false information about the actual game and that the Steam page features screenshots that do not showcase what the actual game looks like.

Earlier yesterday, well known YouTube commentator TotalBiscuit bashed this game. TotalBiscuit expressed his opinion about this title, and blamed Hammerpoint for lying about the actual game on its Steam page with features that were not implemented. For example: TotalBiscuit claimed that Hammerpoint was lying to its customers as there weren’t any servers that could handle 100 players. Shortly after that, Hammerpoint has made available a number of servers that supported this amount of players.

Hammerpoint has also updated the game’s Steam page after this whole controversy. In case you were unaware of, its Steam page suggested that the game featured “areas between 100 to 400 square kilometers”, when in fact there is only one map available that is 72 square kilometers. The Steam page also listed private servers and skills that can be bought with experience points, even though the game does not support either of these two features. Let’s also not forget that the game is advertised as an MMO, when in fact it feels like a typical MP game. You can view below The War Z’s initial (left) and new (right) Steam pages. 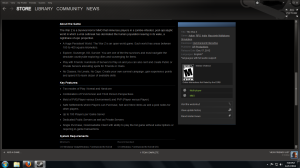 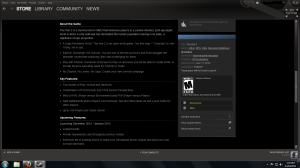 Before closing, let us say that we understand that Hammerpoint is a small studio and that it’s trying to bring something noteworthy to the table. We understand that they saw a chance and grabbed it. We also understand that they want to make money, which further explains the microtransaction model that has been implemented. We even understand the company’s policy to delete certain threads, provided its moderators thought that they were simply troll topics and nothing more.

As always, we won’t take anyone’s side on this: that’s up to you to decide. Is The War Z a DayZ ripoff or an indie title that had high hopes and failed to deliver? Is it a scam or an Icarus? Feel free to share your thoughts with us below!

Valve has disabled the game’s sales from Steam and offers full refunds. As Valve stated:

“From time to time a mistake can be made and one was made by prematurely issuing a copy of The War Z for sale via Steam. We apologize for this and have temporary removed the sale offering of the title until we have time to work with the developer and have confidence in a new build. Those who purchase the game and wish to continue playing it via Steam may do so. Those who purchased the title via Steam and are unhappy with what they received may seek a refund by creating a ticket at our support site“