It’s really funny how Skyrim suffers from the same issues that plagued Oblivion. As you may remember, one of them was the blurry textures in the distant landscapes and back then, modder Qarl released a texture pack that enhanced those distant textures. Bethesda tried to fix most of them in Skyrim, but you will still be able to notice some low-res textures in some panoramic views. Good news then that modder OpticShooter decided to release a mod that enhances Skyrim’s distant textures.

As with Oblivion, you can overcome this problem by raising the number of the cells/grids that are loaded via the game’s .ini file. Although this fixes the blurry distant textures and the pop-up of the environmental objects, it brings a massive performance hit. Therefore, OpticShooter’s textures are a great solution since the performance hit is minimal, yet the difference is easily noticeable.

Those interested can download the mod from here. Here is also a comparison shot. On the left we have vanilla Skyrim and on the right the modded one. Enjoy! 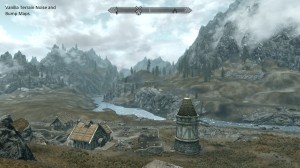 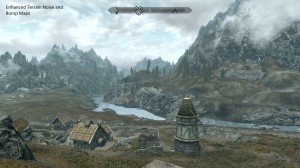