I have to be honest here; I am a huge fan of TEKKEN 7. And like many PC gamers, I was really frustrated by the lack of online improvements regarding its PC version. Fortunately, though, Bandai Namco has just released a new patch that addresses and improves the overall online experience on the PC.

According to the release notes, this latest patch for TEKKEN 7 improves matchmaking timing in all online modes, removes player’s information including character, wins, grade and title during matchmaking, removes Match Lists following the improvement in matchmaking, and lifts the restriction on revenge matches in Ranked Match, to enables unlimited revenge matches.

In other words, this is huge news for all TEKKEN 7 PC players. HOWEVER, and that’s a big however, it appears that this PC patch contains a… malware. Or at least that’s what Avira is reporting. After Steam patching the game, we received the following alert. 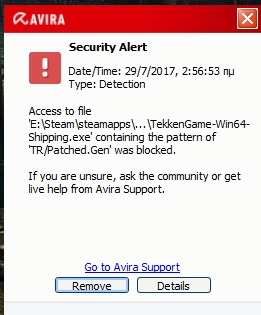 Now while this is more likely a false positive, it’s amazing – and at the same time ridiculous – that the Q&A team missed something like that. Hopefully Bandai Namco will release a new hotfix for TEKKEN 7 in order to address this issue.