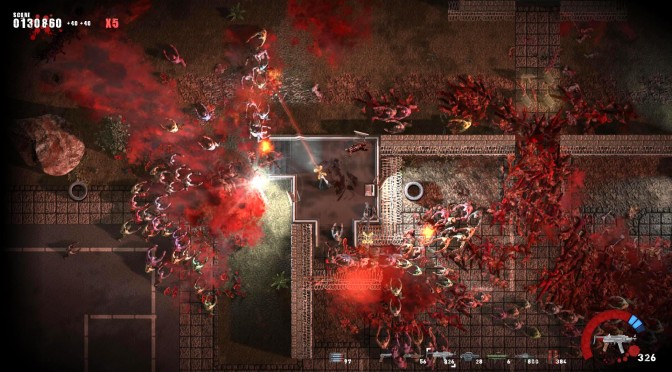 bitComposer Games and Indie developer Dreamworlds announced today the release of SPLATTER – Blood Red Edition on Steam. The top down shooter recently got greenlit by the community and comes along with an extensive, completely voiced Film-Noir-Singleplayer campaign and a local multiplayer mode for up to four players.

In order to prevail in a fight against hordes of zombies and monsters, players have to make use of lights and shadows, destructible environments and tons of upgrades for their weapons.

Needless to say that we are big fans of such titles, especially when they appear polished as this one.

-Topdown shooter with challenging fights against all kinds of zombies and monsters
-Lights and shadows add a tactical layer to the battles
-A destructible environment to shatter, with resources hidden inside
-Story campaign with bosses, cutscenes, vehicles, friendly characters and side missions
-Upgradeable weapons gain new qualities and features with each level
-Arcade game modes with online leaderboards pit you against your friends’ scores
-Local multiplayer for upto 4 players with controllers, mice, keyboards… whatever you got – use it!
-And lots and lots of action