It appears that PNY has stolen NVIDIA’s thunder and revealed the full specifications of the GeForce RTX 2080Ti. Yes, NVIDIA’s new graphics cards will be called RTX 20XX and there will be a Ti variant. According to the description, the GeForce RTX graphics cards are powered by the Turing GPU architecture and the all-new RTX platform.

The GeForce RTX GPUs will offer up to 6X the performance of previous-generation graphics cards combined with maximum power efficiency. The GeForce RTX 2080 Ti is said to be light years ahead of other cards, delivering truly unique real-time ray-tracing technologies for cutting-edge, hyper-realistic graphics, and will brings the power of AI to games.

PNY’s GeForce RTX 2080Ti Overclocked XLR8 Edition will feature core clocks at 1350Mhz that can be turbo boosted to 1545Mhz. As with all the upcoming 2080Ti graphics cards, it will be equipped with 11GB of vRAM, will feature NVLink 2-way, will support resolutions up to 7680×4320 at 60Hz, will be Virtual Reality Ready and will require 2 eight-pin power connectors.

And here are the specs of this upcoming GPU. 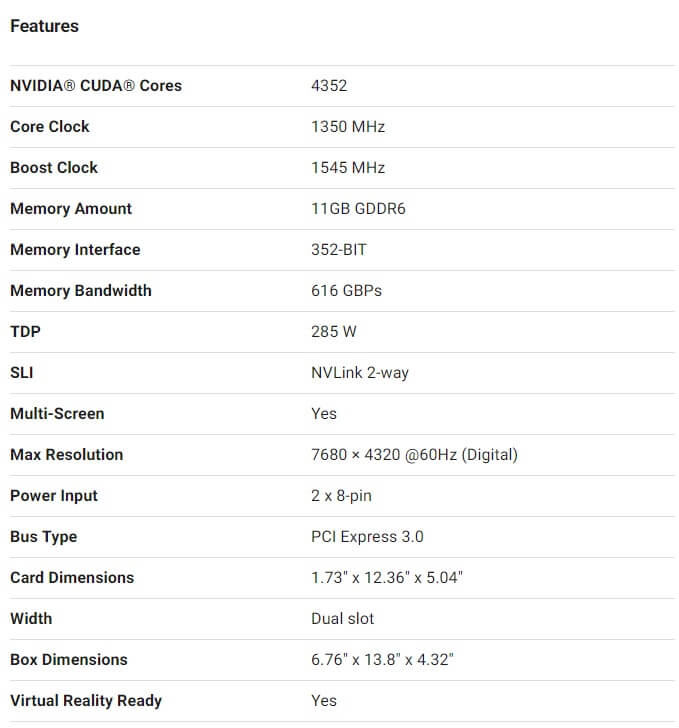 Last but not least, there is a placeholder price of $1000 so we don’t know whether this graphics card will cost $999 or lower than that!