It appears the Chinese online shopping website Taobao has listed Nvidia’s yet to be officially announced RTX 3060 Ti Ampere GPU. Retailers have started taking pre-orders for this upcoming GPU entry in the RTX 30-series lineup, as spotted by @Avery78.

#RTX3060Ti pre-orders up on Taobao ~$400. Notice bottom right corner (1st pic) they are expecting Nov 30th. Believe this is for an Inno3D model. Picture is just a placeholder (as with all this info) Source: https://t.co/MSX3PzpOqn#Nvidia #Ampere pic.twitter.com/87mWKuRJah

The RTX 3060 Ti is going to be based on the 392 mm², 17.4 billion transistor GA104-200 GPU silicon chip. This GPU is not expected to launch before the mid of November this year. The RTX 3060 Ti should be the new mid-range/mainstream graphics card in the Ampere lineup, and the price is expected to be around $400 USD (rough estimate).

This upcoming SKU has also appeared on the roadmap according to previous rumors. Even GALAX’s roadmap and Gigabyte’s Watch Dogs Legion code redeeming website also hinted that Nvidia plans to release more SKUs based on the 8nm Ampere architecture, including this new RTX 3060 Ti variant GPU.

The card is currently listed at Taobao for 2049 to 2999 Chinese Yuans, which translates to roughly 305 to 446 USD range. We expect this GPU to be faster than the previous gen Turing-based GeForce RTX 2080 card.

From one of the listings we can also see a non-Ti variant being mentioned as well, the RTX 3060. This is the first time we are getting some confirmation on the existence of the RTX 3060/3060 Ti SKUs.

Nvidia has not yet announced this X60 SKU, though we have been hearing rumors that Nvidia might release two variants, based on the GA106 and GA104 GPU core/die.

The GA104 GPU would likely adopt the Ti or Super branding. And we expect the GA106 silicon to be featured on the plain RTX 3060 GPU (the non-Ti/Super variant), and rumor has it that this card might feature 6 GB of GDDR6 memory over a 192-bit wide bus interface.

The RTX 3060 Ti on the other hand will sport 8 GB GDDR6 VRAM over a 256-bit wide memory bus interface, and the memory clock speed would be 14 Gbps.

Moreover, the card will have 152 Tensor Cores, and 38 RT Cores, respectively, and the power consumption or TDP is expected to be around 180 Watts. This GPU seems to be more of a successor to the GeForce RTX 2060 SUPER SKU.

Someone just posted a GPU-Z screenshot confirming most of the specs of this GPU, as I’ve outlined above. This appears to be a custom card from board partner HP. Most of the specs are accurate except for the TMU/texture mapping unit count.

ROP or raster operations pipeline count is 80. Also, the RTX 3060 Ti will have a base clock of 1410 MHz and a boost clock value of 1665 MHz, as reported by the software. This screenshot further confirms the existence of this new Ampere GPU. 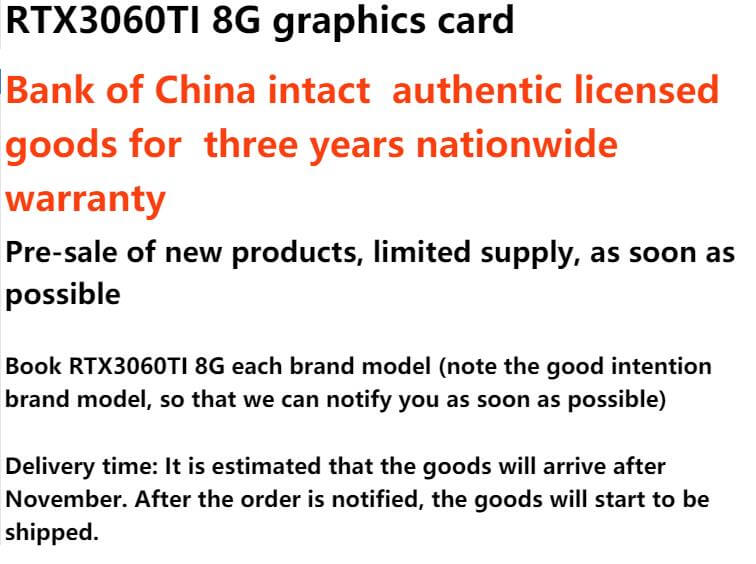 Also, don’t expect similar pricing for these variants. These Ti/Super variants aren’t meant to replace the existing RTX 30-series lineup either, but they rather offer a step-up and upgrade in terms of memory and better core specs, but at slightly higher prices.

This all depends on how AMD responds back with their NAVI 2X lineup based on the new RDNA2 architecture.