An alleged picture of the Ampere GA102-300 GPU die has been posted online by a Chiphell user PolyMorph, coming via WCCFTECH. This could be the silicon that would power the upcoming RTX 3090 flagship Ampere graphics card.

NVIDIA’s flagship gaming GPUs are going to use the GA102 GPU core, and these are expected to deliver huge performance gains over the Turing TU102 GPU silicon. The GA102-300-A1 core has previously been hinted to be utilized by the flagship GeForce RTX 3090 graphics card.

The GA102-300-A1 chip which has been pictured is in the qualification state. The picture does not reveal the full graphics processor, but we can read the codename. The GPU is a qualification sample/QUAL SAMPLE, which means custom board partners/AIBs are having this GPU in ready for development.

The full package has not been pictured though, so we can’t guess the DIE size/shape accurately, but if previous leaks/rumors are to be believed, then the die should have an area of roughly 630 mm2. A lot of the image has been blurred out, so we can’t identify where the chip was produced, and other important parameters. Some unique identifiers such as the date this chip was produced, and the specific location of plant/factory where it was fabricated are missing. Nonetheless, the die appears to be massive in size.

Nvidia’s flagship RTX 3090 will feature 24GB of GDDR6X memory, though 12GB models are also expected, according to previous rumors. This graphics card is expected to feature 5248 CUDA cores, representing a significant increase in core count over the RTX 2080 Ti, which features 4352 CUDA cores.

Nvidia is hosting a Geforce Special Event on September 1st, and we expect the company to announce the next-gen Ampere Gaming GPUs. The reviews and product availability are both expected throughout September, but we don’t know the exact dates yet. 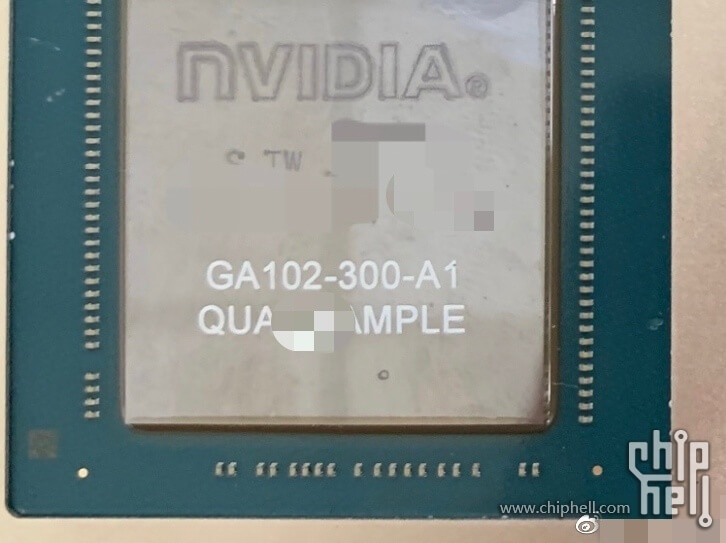