As you already know GPU Mining has been a common trend these days. Crypto mining or “cryptomining,” as some call it, is a very popular topic in the crypto space today. However, mining is nothing new, since it has obviously been around since Bitcoin was first launched in 2009.

GPU mining involves the use of a gaming computer’s graphics processing unit to solve complex math problems to verify electronic transactions on a blockchain. While there are a lot of different graphics cards in the markets, the cards used for crypto mining are those specially designed for gaming, not necessarily for video rendering.

Cryptocurrencies like Bitcoin (BTC), Ethereum (ETH), Monero (XMR), Litecoin (LTC) and Dogecoin (DOGE) are examples of coins that can be mined. Many miners build rigs using several graphics cards at a time to produce a powerful machine dedicated to mining crypto-currency, rather than gaming.

Recently a YouTube channel @Testing Games posted some gaming benchmarks of a used mining card, the Nvidia GeForce RTX 2080 Ti. The user has benchmarked an old RTX 2080 Ti GPU which was used solely for mining for almost 1.5 years, and compared the results with his brand new RTX 2080 Ti GPU.

It’s a known fact that if any GPU has been subjected to Mining for a long time there are chances of possible wear and tear of the graphics card, its components, and the cooling system/PCB as well. This can easily affect the performance of any GPU in the long run.

The YouTube channel @Testing Games has tried to demonstrate this performance drop effect on his heavily used mining GPU.

How Much Does Mining Spoil The Graphics Card?

One exception was Forza Horizon 4 game, in which the mining card was actually 20% slower than the new card. So this does show that any GPU used for mining can deteriorate gaming performance, which seems obvious given how mining works. Though, there is still no hard and fast rule to this.

The main culprit for the loss in gaming performance can be attributed to the GPU clock speed and temperature of the Mining card. There was actually a 100MHz drop in boost frequency for the mining card, due to the fact that the mining card was almost 14-16C hotter than the brand new RTX 2080 Ti, which hindered the overall performance.

The correlation between the temp and the drop in GPU boost clock speed is obviously based on Nvidia’s GPU Boost 4.0 algorithm, which is known to be very sensitive to the GPU’s temperature value.

Apart from that, any dust buildup on a heavily mined GPU in the heat sink, or beneath the fans can also greatly affect the cooling performance of the card. This is why it’s always better to apply a fresh thermal paste to your GPU or CPU after several years of usage.

Thermal paste can easily get dry after years, which will reduce the GPU’s thermal and overall performance, especially if the card has been used for Mining purpose.

Below you can find some gaming benchmark screenshots taken from the video. As you can see the brand new GPU provides slightly better frame rates than the heavily used mining GPU. But again, there is still no hard and fast rule to this, since other cards used for mining might exhibit different behavior.

Nonetheless, have a peek. 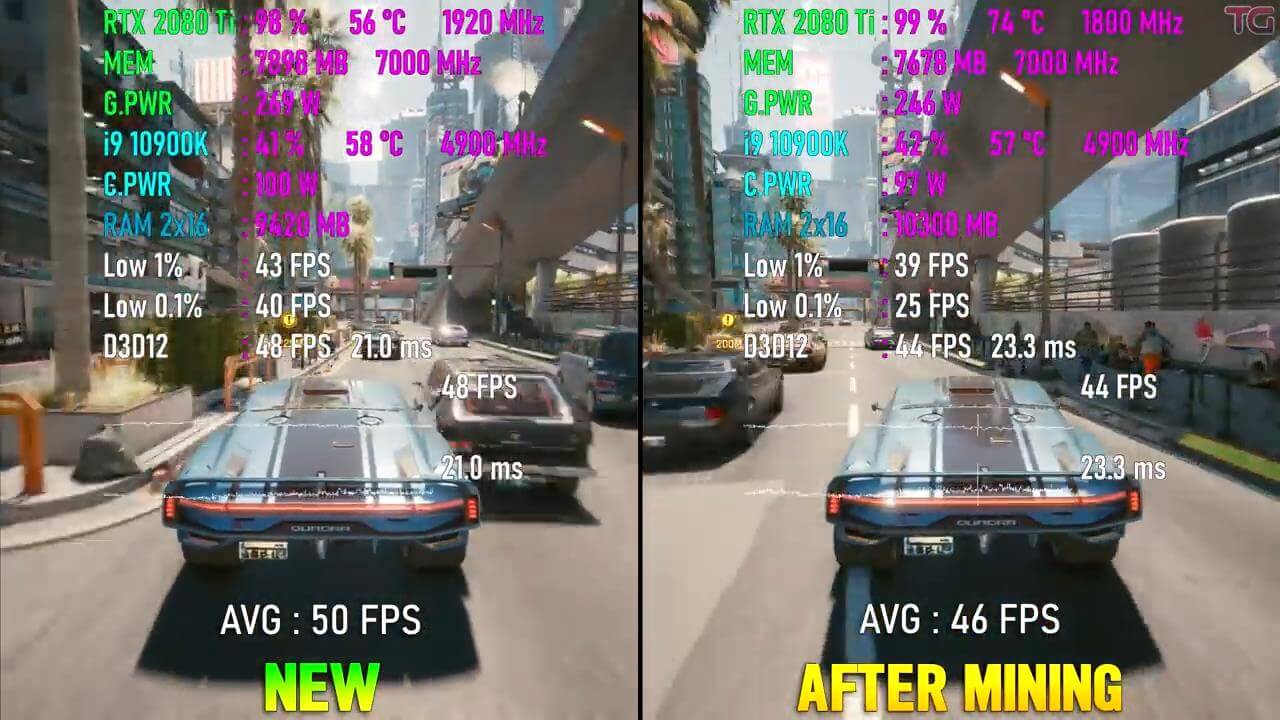 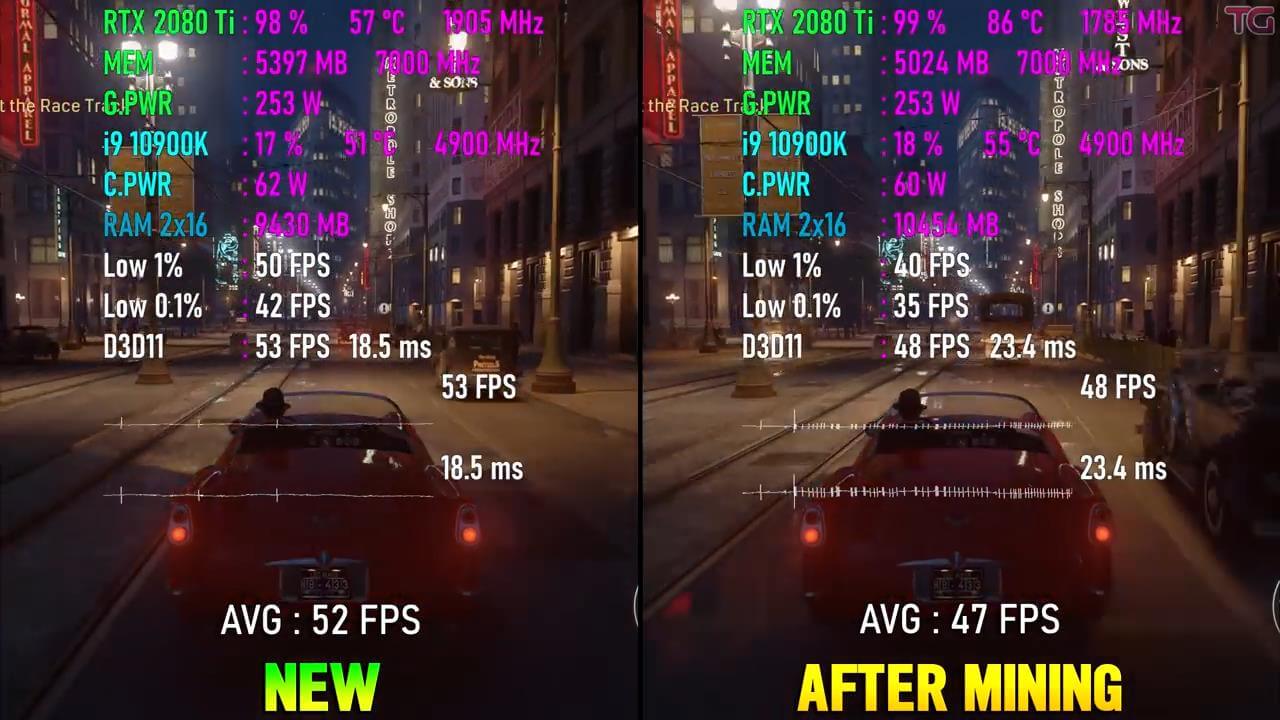 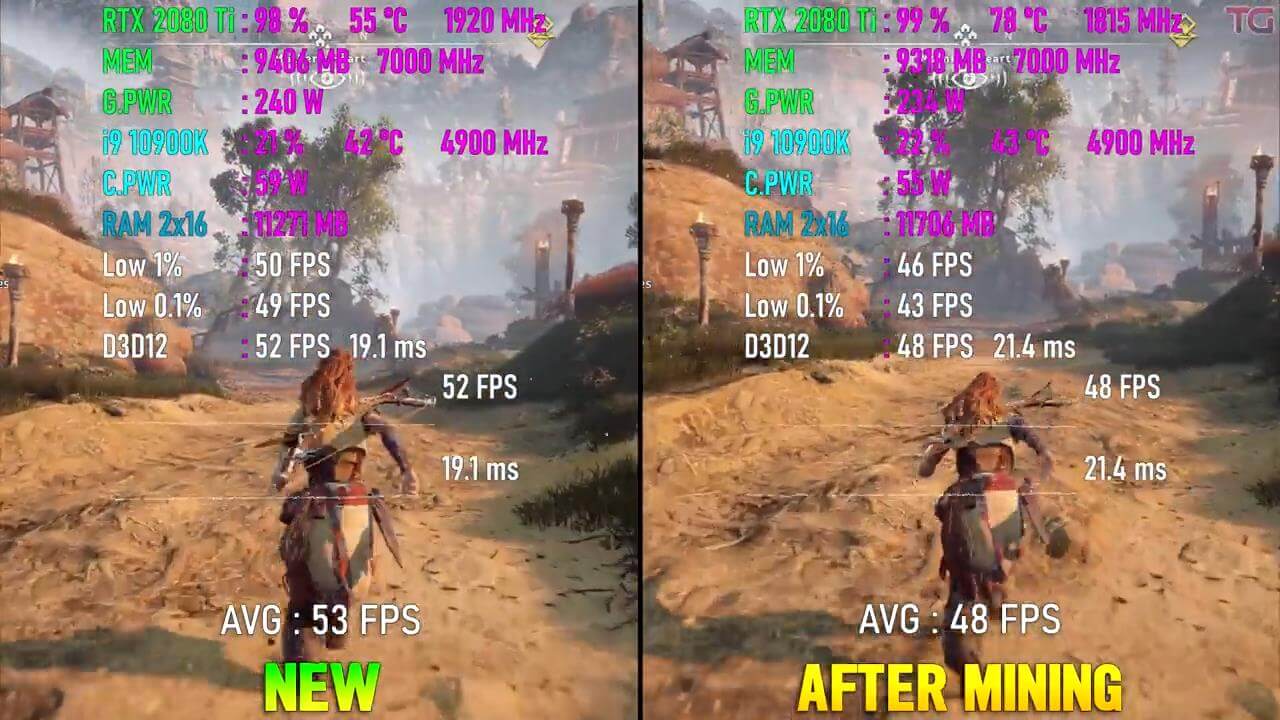 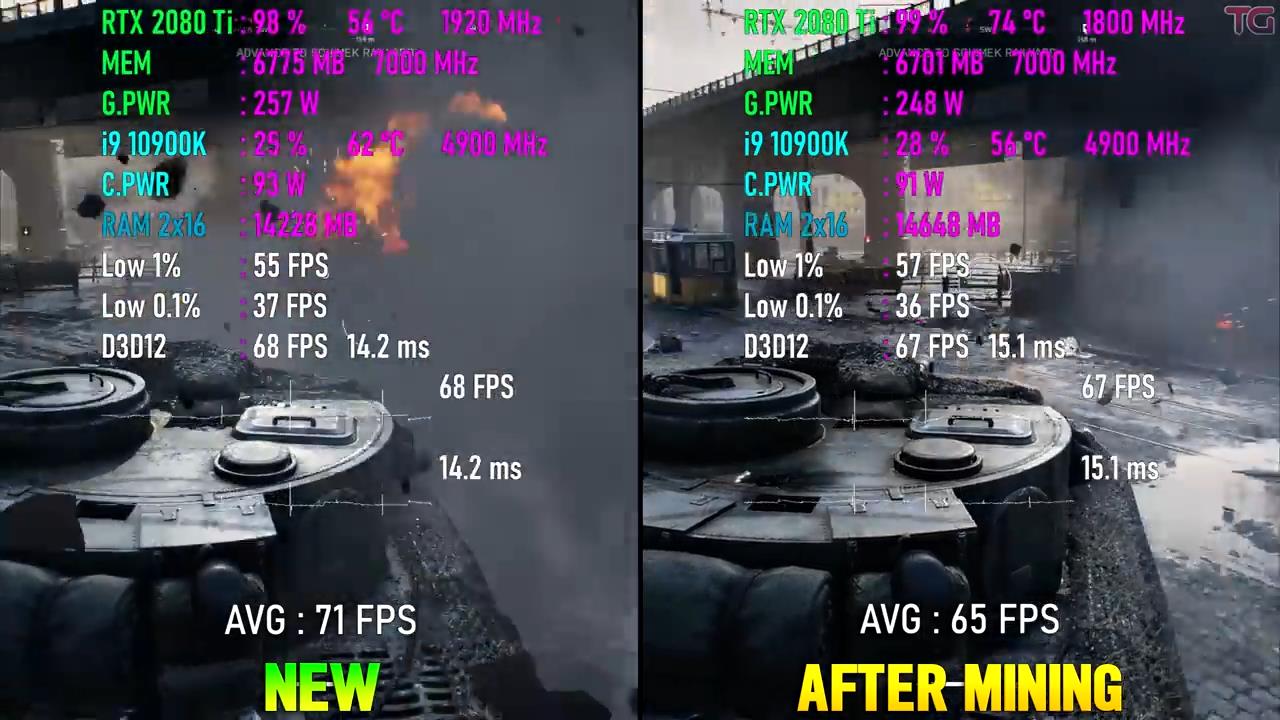 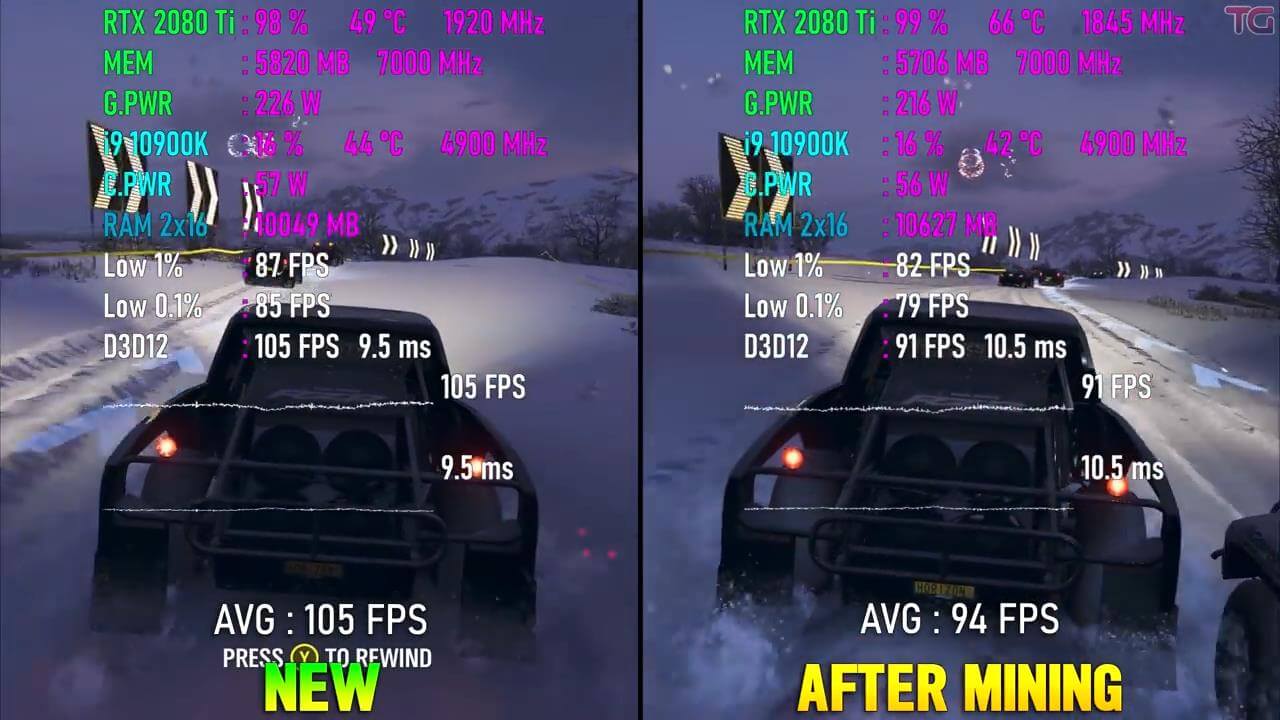 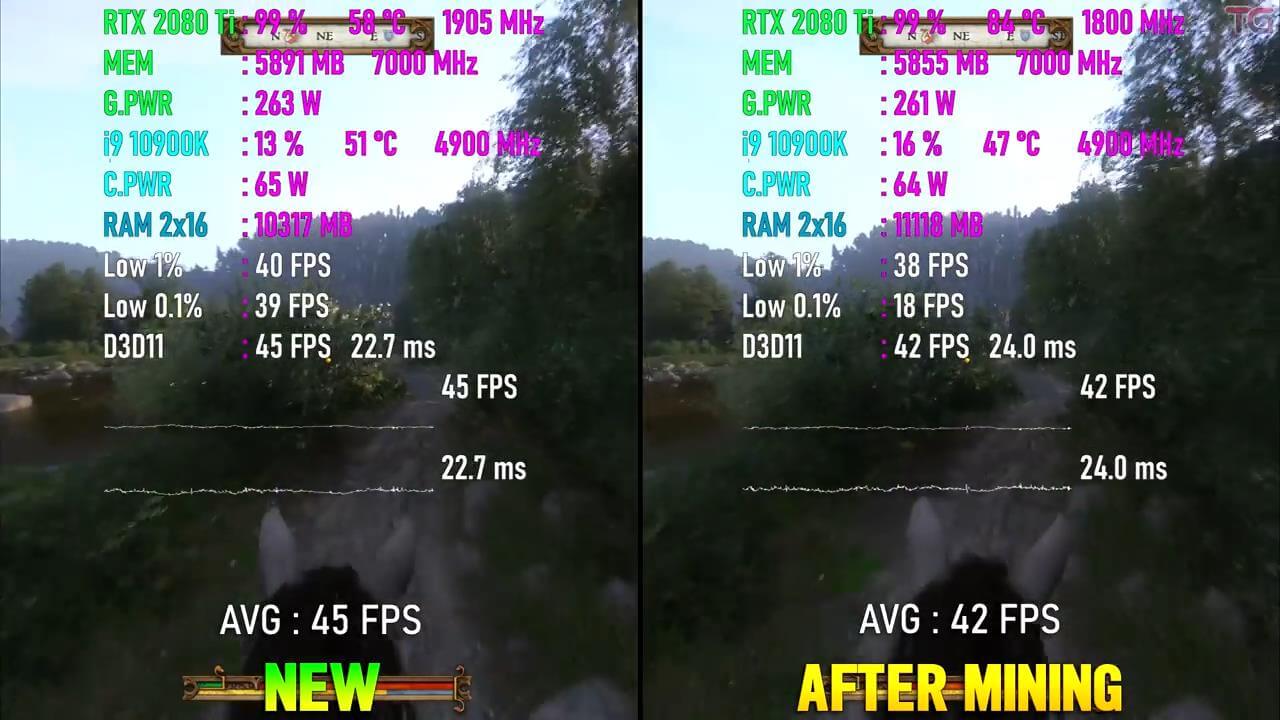 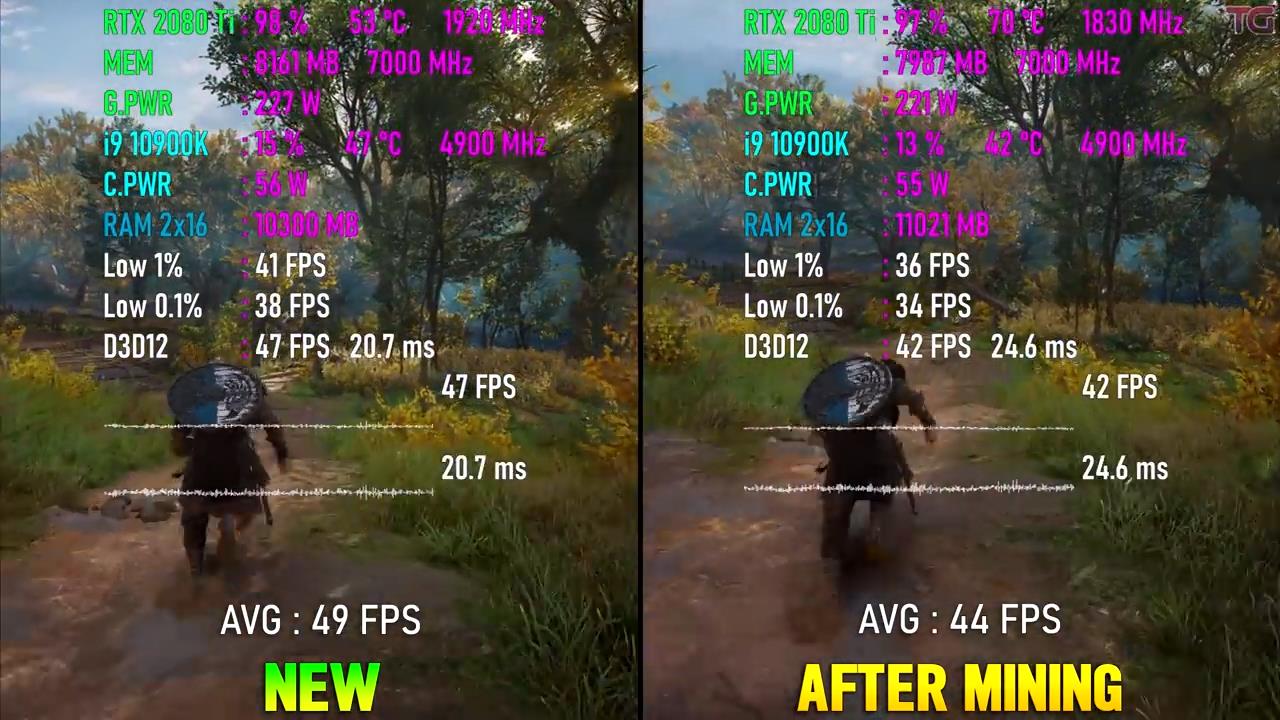 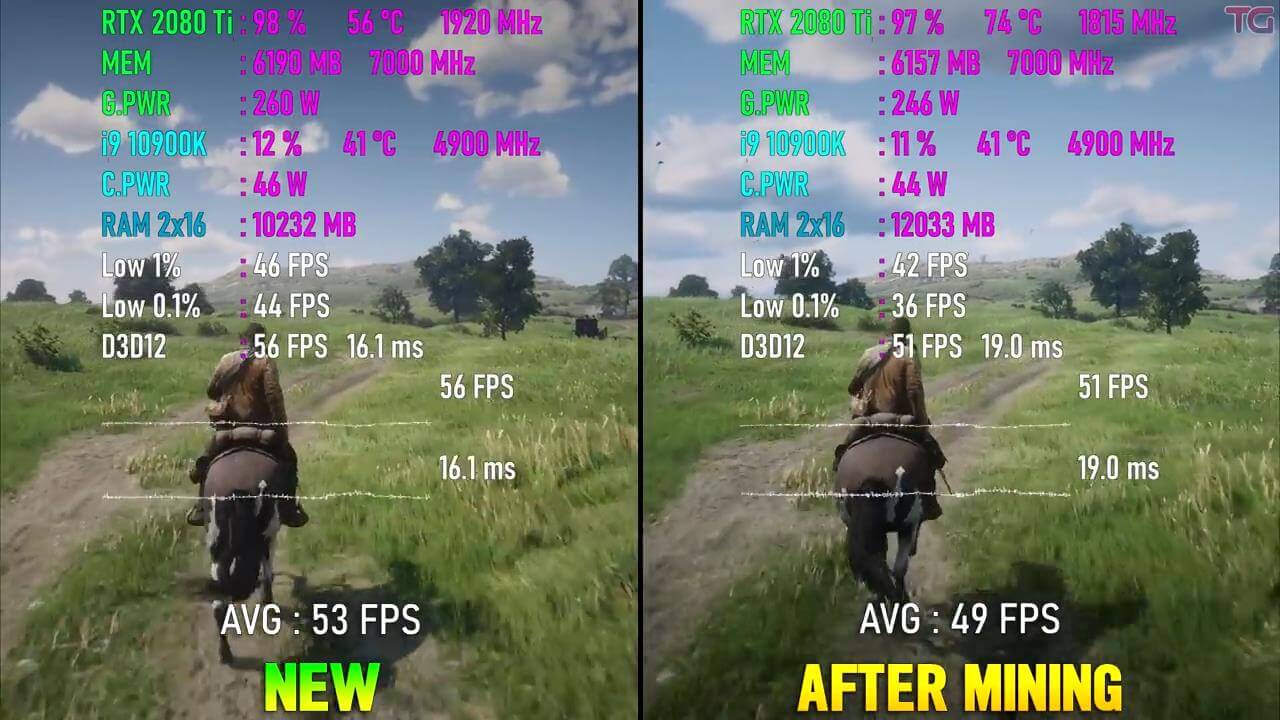