It appears that NVIDIA’s unannounced GeForce RTX 3070 Ti graphics card has been confirmed in a listing as posted by Lenovo for its Legion T7 desktop Gaming PCs. The link appears to be offline at this moment, but Videocardz managed to grab some screenshots.

Nvidia has not officially announced this new SKU, but previous rumors indicated a possible 16 GB variant for the RTX 3070 card. The RTX 3070 Ti features twice the VRAM of the GeForce RTX 3070. This SKU is equipped with a total of 16 GB GDDR6 non-X memory running at the same speeds of 16 Gbps , along with a 256-bit wide bus interface. This should provide a total of 512 GB/s of bandwidth.

We don’t have any other info on the specs, but we expect the card to feature an unlocked GA104 GPU having 6144 CUDA Cores. But the final specs like the exact Memory type and CUDA core count are still subject to change, since Lenovo might be relying on some old data, because Nvidia provided AIB/board partners with the full GPU specifications at the very last moment.

At this time we don’t know whether the RTX 3070 Ti would be an OEM-only SKU, or whether it will also hit the retail and DIY market. Lenovo is the only OEM partner that has listed this GPU. It might be possible that this card existed at some point, but NVIDIA did some last minute changes to exclude this SKU from the launch lineup.

For now, only the RTX 3090, 3080 and 3070 SKUs are going to hit the retail shelves, but if this Lenovo entry is anything to go by, then we can expect a Ti Model as well in near future. 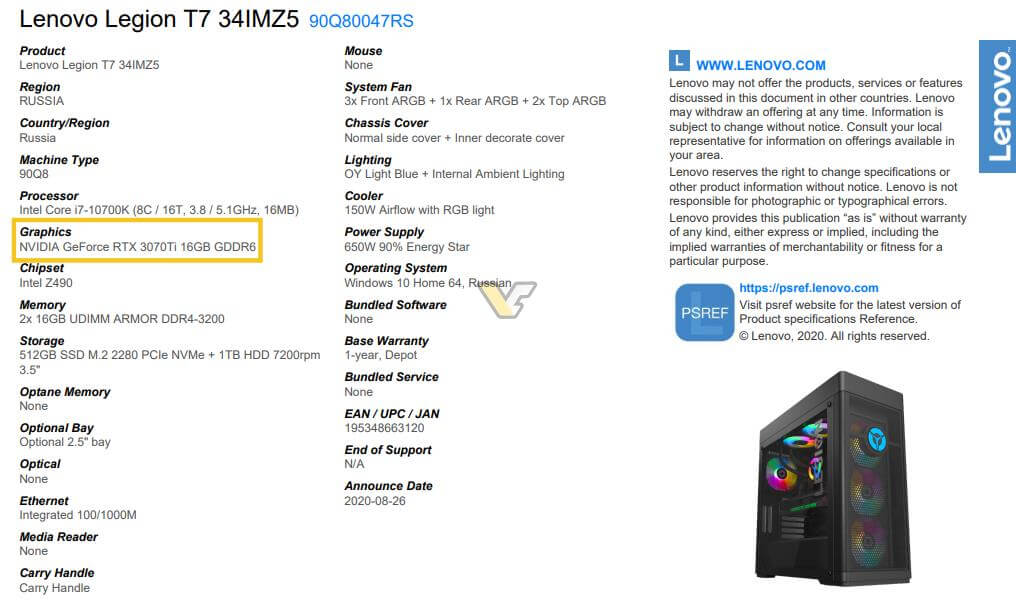 Apparently, there will be also an NVIDIA GeForce RTX3070 Super GPU (thanks Videocardz). According to the listing, the card would feature 8GB GDDR6 memory, so just as much as the ‘original’ RTX 3070. The card is offered with Lenovo Legion T5 desktop system featuring non-K 10th Gen Core i7-10700 CPU and B460 motherboard.