I don’t really know how I feel about this. I mean, obviously not having to deal with engine specs is a good thing for a video-game developers, however it seems a bit weird/awkward/younameit that the next-gen Mass Effect game will be using (and extending) some of the core systems found in Dragon Age III.

Yanick Roy, Studio Director for BioWare in Montreal has revealed that BioWare will be borrowing a lot of game systems from Dragon Age 3.

When NeoGAF‘s user ‘shinobi602’ expressed his disappointment towards Mass Effect’s current development state, Yanick Roy responded and said that BioWare has started a while back working on it, and that the game will be borrowing a lot of game/engine systems from Dragon Age III. 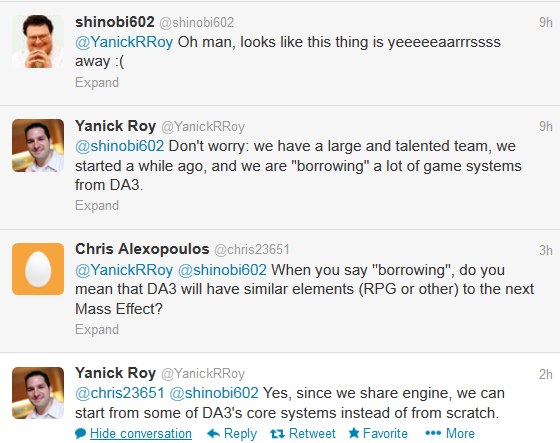 When ‘shinobi602’ asked whether Dragon Age III and Mass Effect next-gen would share more than just game systems, Yanick said that both of these titles will have some similar RPG elements.

Do not expect to see either of these two titles anytime soon. Our best guess is that Dragon Age III may come in 2014, while Mass Effect next-gen is more likely to see the light of day in 2015.