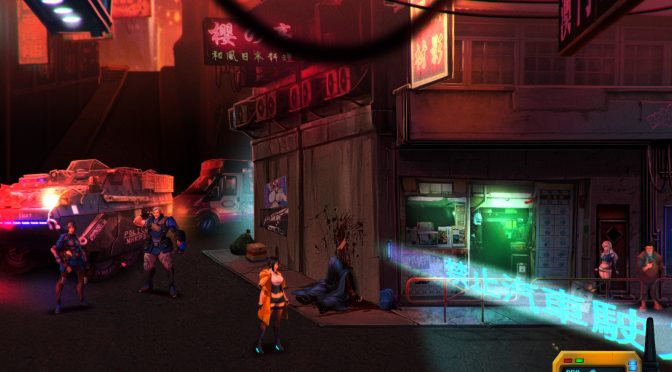 The story of Sense is set in 2083 Neo Hong Kong, where a young woman, Mei Lin Mak, is dragged into a maelstrom of supernatural horror. Thus, Mei will have to question her perception of reality and her trust of her cybernetic eyes. Under the neon lights of a cyberpunk dystopia, the ruins of the ‘Chong Sing Apartments’ hides a bloody mystery. As such, Mei-Lin must explore this complex, piecing together the stories of 14 lost souls to discover the truth of her own family curse.

Sense – A Cyberpunk Ghost Story promises to mix cyberpunk with traditional Cantonese folklore. The game aims to return the horror genre to its roots, and will feature a 2.5D perspective.

The game utilizes a Hand-Painted 2.5D style for its art, which combines the benefits of 3D (such as shifting perspective) with the intricate, colorful style of 2D illustration. Sense also happily embraces eroticism and fan-service in its art. However, this embrace does not detract from its roots in the horror genre. Ghastly spirits, ghouls, and creatures of all types will be lurking in the shadows.

Furthermore, the game’s locations are heavily influenced by futuristic environments, drawing inspiration from the architecture of Asian cities and buildings. The aesthetic consists of bright, colorful neon lights, a stark contrast to the dark, brooding streets and back alleys of the dystopia that the protagonist finds herself in.

Andy Andi Han will also handle the game’s soundtrack, who was the co-composer of the visual novel Katawa Shoujo. With influences from John Carpenter, Vangelis, and traditional Chinese Opera, the synthesizer-meets-eastern sound provides a lasting and memorable auditory experience.

“After lots of drafting, feedback, and help from an established publisher and fellow developers, I think I found a solid look and feel. Most importantly, I feel was finally able to craft something unique and exciting.”

You can download the game’s free demo from here.