Lost Planet fans, get ready for the third part of this action-oriented series. Some information got leaked and it appears that Spark Unlimited will be behind the wheel of Lost Planet 3. Not only that, but a trailer for the game was leaked to, hinting to a 2013 release on X360 and PS3. Typically, the PC version was not listed but given the fact that Capcom has released both Lost Planet 1 and 2 on our platform, we can safely assume that it will come to it at a later date. Keep in mind that Captivate’s 2012 embargo will be lifted today, so expect even more news about Capcom’s future games. Enjoy!

UPDATE: Naturally, it seems that the game will be ported to the PC. Although Capcom hasn’t confirmed anything yet, Spark Unlimited’s ‘job listings’ page suggests that they are developing an unannounced title for PS3, X360 and PC. As the page reads:

“We are in production on an unannounced high-profile, popular game sequel for Xbox 360, PS3 and PC release. We have just entered pre-production on a franchise and genre extending game also for the current generation consoles.”

Some might say that the pre-production game for current generation consoles could be Lost Planet 3. Well, that’s not the case. While browsing some of these job applications, we found out that the game that is in pre-production will be a ‘3rd Person Action Slasher with Horror elements for the Ps3 and Xbox360’. Now we all know that Lost Planet is not a slasher but a shooter game (and we definitely know that it won’t be a horror game). Moreover, in another job application, we can clearly see that Spark is developing a third-person action shooter for Xbox 360, PS3 and PC markets. Ding ding ding. And we have a winner everyone.

So yeah, Lost Planet 3 will definitely hit the PC at a later date. Special thanks to our reader ‘bkhtrv’ for spotting the jobs page.

UPDATE2: NDA lifted and Lost Planet 3 is officially coming to the PC in 2013. Rejoice PC fans!

Lost Planet 3 introduces Jim, a rig pilot who leaves Earth to take on a hazardous but lucrative contract on E.D.N. III. Working for Neo-Venus Construction (NEVEC) who are preparing the planet for colonization, Jim joins his fellow pioneers at the Coronis base and begins surveying the uncharted terrain and obtaining samples of the planet’s energy supply – Thermal Energy.

With NEVEC’s existing Thermal Energy reserve running low the fate of the Coronis mission depends on the natural source of the energy supply being located. Realizing that this is a great opportunity for a huge pay-off and early ticket home to his family, Jim braves the risk of the treacherous environment and threat of the indigenous Akrid. Acting as a home away from home and boasting an array of tools that can assist Jim on the field, the utility rig provides Jim’s safety and is essential for not only his contract work but also his protection against the ever-changing climate.

Lost Planet 3 will deliver a diverse range of gameplay including on-foot battles and intense first person action. With a number of multiplayer modes and a compelling single player experience, Lost Planet 3 will delve deeper into the Lost Planet universe, uncovering hidden truths within the unique and dynamic environment of E.D.N. III. 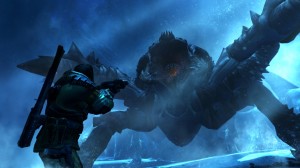 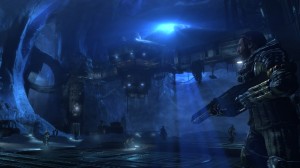 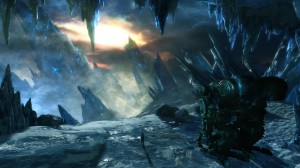 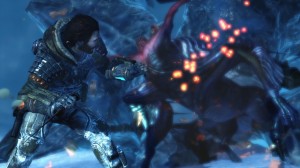 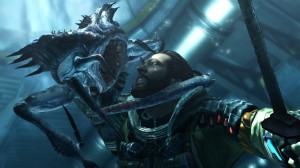 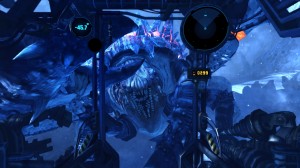