Earlier yesterday, John Carmack shared his thoughts on AMD’s Mantle. During Nvidia’s Montreal event, Carmack claimed that although he would be tempted to use Mantle, he would not do such a thing at this point. Carmack claimed that it’s not stupid – for AMD – to attempt something like that, however he believed that Sony and Microsoft would not embrace it. But why is Carmack against this new API?

According to Carmack himself, Nvidia’s OpenGL extensions can give similar improvements – regarding draw calls – with AMD’s Mantle. 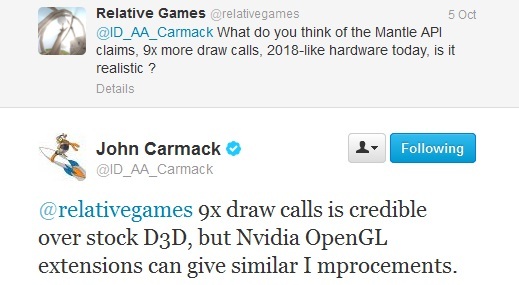 And it seems that Carmack may be right (okay okay, of course and he is but let’s doubt the guru for a moment). NeoGAF’s member ‘Durante’ (best known for his amazing DSFix mod for Dark Souls) has shared the following image that showcases how efficient OpenGL can actually be with the overall amount of draw calls. As we can see, OpenGL can handle more draw calls than DX11 (we should note that this data is from 2011).

Going one step further, Carmack has also commented on the 8GB of memory that the next-gen consoles will be equipped with. When a fan asked whether the inclusion of 8GB of memory on both Xbox One and PS4 was a significant change over PCs with 4GBs, Carmack said that those extra GBs would not make games look very different.

“I don’t think it will make games look very different, but it will help them to be developed somewhat quicker and easier.”

It’s interesting that Carmack did not mention performance gains with regards to those extra GBs of next-gen consoles. Not that it surprised us though as that ‘8GB wow-ish’ hyper is just… hype. Yes yes, people will through that ‘Unified memory’ but have they really thought about this? Because a system with higher clocks on its 4GBs of GDDR5 unified memory will beat a system with 8GBs of GDDR5 that run at significantly lower speeds, and that’s a fact.

This is something that a lot of people seem to overlook, but then again you don’t have to take our word for this – there are already a lot of devs who believe this very same thing. Is it an overkill featuring 8GB of memory? Most probably. Will they take advantage of all of them for video-games? Unlikely. Is this a ‘hype’ thing like Blu-Ray was for PS3, when developers claimed that – thanks to it – even multi-platform games would look better on PS3 than X360? No one knows at this point. Is it a significant change from PCs that are equipped with 4GBs. According to Carmack, not really.

All in all, we’ll have to wait for the next-gen games to hit streets to see who is right and who is wrong.