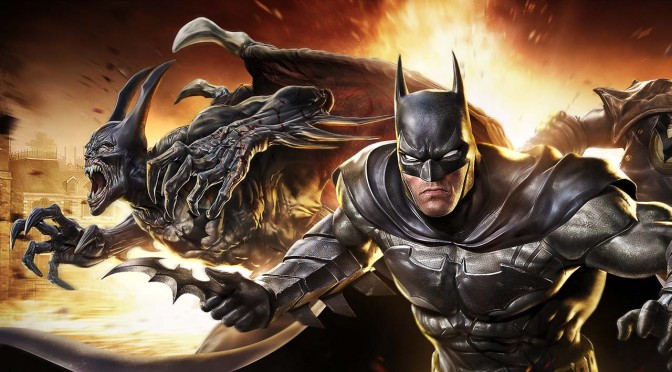 Infinite Crisis, the free-to-play MOBA from Turbine based in the DC Universe, today launched its largest update yet introducing a new tutorial mode where players are coached by famed DC heroes and unlock six free Champions as they learn to master the game.

Warner Bros has released two trailers focusing on these brand new champions that can be viewed below.

And here is the complete changelog for September’s Update:

The Infinite Crisis launcher has received a new look! You can now see additional content in a more graphically pleasing format.

The entire out-of-match user interface has been updated! For those of you whom have been with us for a while, you’ll be welcomed to a brand new “experienced” interface mode that will detail your latest statistics, show the last champion you played as, track your achievements, and more!

We’ve also improved the design of the Queue Select screen, which now details what you can expect on each map in Infinite Crisis.

New players: You’ll receive a simplified version of our UI that features the six missions of our New User Experience. Speaking of that…

If you’re new to Infinite Crisis, get ready to receive a helping hand from Earth Prime’s most powerful Champions. Superman, Wonder Woman, Green Lantern and more are ready to give you advice on how to compete in the Lost Sectors. Plus, follow along with the story of Gaslight Batman as he goes to great lengths to keep Gaslight Gotham safe during the beginnings of the Crisis.

As you complete the six missions of the New User Experience, you’ll permanently unlock Gaslight Batman, Wonder Woman, Green Lantern, Doomsday, Harley Quinn, and Batman. If you’re a returning Protector, we encourage you to try out the new missions, watch the brand new motion comic vignettes, learn more about the story behind the Crisis, and unlock a few champions for your own collection!

If you’ve owned one of those six champions prior to the September Update, we’re offering you a refund depending on how you purchased them. You can learn more about the refunds in our forums.

Our teams have polished up the environments on all of our maps! Take a spin under the lights of Gotham City, count the cobblestones on Gaslight Gotham, or enjoy the parks of the Gotham Divided jungle. Whatever map you choose, keep an eye out for a new take on your old, favorite locations.

Our team has gone through and updated all of the animations in the game. All Protectors should now find that Champions respond more quickly when their skills are used, and that they can link their skills together more fluidly.

The Infinite Crisis team has completed a substantial re-balance to the game’s Artifacts, Champions, and Amplifiers. We highly encourage you to check over these sections of the release notes before entering the Lost Sectors, as some Champions have completely changed their roles and some Artifacts and Amplifiers are functionally different than before.

The Construct’s sensors have locked onto a new location: Gotham City’s Park Row, better known as “Crime Alley.” This is the infamous walk where Thomas and Martha Wayne were murdered, and it’s the newest training ground for Protectors of all skill levels.

Crime Alley is a 1 player vs. AI map where you can test your new champions and artifact builds against a mechanical version of Gaslight Batman. Plus, take a detour into the back alleys to try your skills against a few foes who make their home in Gotham Divided’s jungle!

-The entire soundtrack has been rerecorded by a 78 piece orchestra! In the words of our Audio Director, “So awesome!”
-For this release, we welcome Green Lantern to the login screen! Enjoy Hal Jordan as he floats in space accompanied by his technoriffic musical theme.
-We’ve updated the wallpaper art for Gaslight Batman, Green Lantern, Cyborg, Atomic Green Lantern, Nightmare Batman, and Arcane Green Lantern.
-The options menu now contains the ability to set one resolution for the out-of-match menus and a different one for in-game. Now you have the option to put your menus into a windowed mode, but leave your games in full screen.
-Changing your graphics settings now results in a decrease in the level of destruction. Lower graphics setting will have less active destruction, which should result in a performance increase on lower-end systems.
-The visual effects of Iron Will on Steel’s Breastplate will now appropriately play around the waist of the Champion.
-Champions that are immune to crowd control are now immune to the Cripple effect.
-We have added additional music on Gotham Divided! New dynamic themes now play when one of your team’s dampeners are deactivated, or when your power core or power core turrets are being attacked.
-The game’s minimaps have been updated to reflect the new terrain upgrades, as well as to more clearly define passable and impassable areas.
-Thrown objects no longer cause destruction after making contact with an enemy champion.
-We’ve updated the visual effects for Rip Hunter’s Time Pack’s Time Anchor.
-We’ve fixed a bug that could sometimes cause the status icon for certain effects (mostly Auras) to show the wrong Champion as the source.
-Players should no longer be able to get inside of the power core by using certain abilities. Monitor technology is just too dangerous for you to be inside of it.
-Deployables in Gotham Divided now properly play Teleport effects when the Teleport power is used on them.
-The setting to show FPS has been removed from the Graphics tab of the Preferences and added to the Interface tab.
-All maps now have ambient sound effects near specific locations. Keep an ear open for them!
-Fixed an issue in draft modes where a player’s turn could be skipped when drafting a Champion.