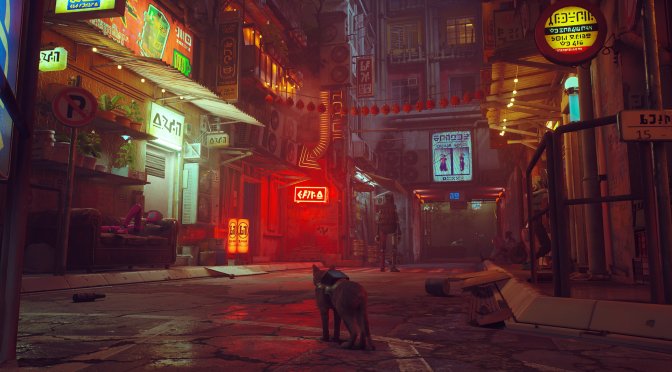 Now here is something really interesting. Stray, the latest cat adventure game, appears to have numerous Ray Tracing effects that are disabled by default. However, PC gamers can actually force these RT effects by simply enabling DX12 support.

Now before continuing, do note that this trick does not work in other Unreal Engine 4 games. In other words, you can’t enable Ray Tracing in other UE4 games by simply tweaking an .INI file. In order for this to work, the game needs to already have actual RT code, implemented by the developers themselves.

With this out of the way, you can enable Ray Tracing in Stray by adding a simple command parameter to it. Just open Steam and add the “-dx12” launch parameter to the game.

By doing so, the game will automatically enable Ray Tracing Shadows, Ambient Occlusion and Reflections. And no, this isn’t a placebo effect. The game does actually have Ray Tracing effects.

Reddit’s member speedtree has shared the following comparison between DX11 (left) and DX12 (right). This comparison showcases the RT DX12 effects. We can also confirm their presence after testing it ourselves.

The downside here is that these Ray Tracing effects come at a great cost. Our NVIDIA GeForce RTX3080 was unable to provide a 60fps experience even at 1440p. Not only that, but the game does not support NVIDIA DLSS (or AMD FSR 2.0), and there is currently no way to force these upscaling techniques.

Let’s hope that BlueTwelve Studio will add support for NVIDIA DLSS, as well as in-game adjustable quality settings for the Ray Tracing effects via a future patch!